I am not a fan of Agatha Christie 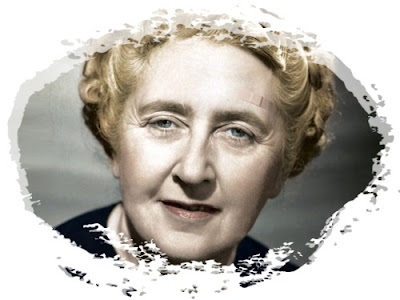 I am not a fan of Agatha Christie.

Agatha Christie born Monday 15th September 1890 then popped her clogs in order to sit at the great typewriter in the sky on Monday 12th January 1976.

Born and died on a Monday: Monday’s child is full of grace. Grace to become the best selling author in modern times. Did Billy Wobblestick sell a billion copies of his words ?  Agatha did and even forty-five years after she sat down at that heavenly typewriter, or do they have laptops in heaven, she is still selling copies today.

The lady doth protest too much, methinks…..All that glitters is not gold…...Now is the winter of our discontent……By the pricking of my thumbs, Something wicked this way comes…..

Just a few quotes from The Bard. What has dear Agatha given us:

Hercule Poirot, a self-important foreigner with a bald head and a silly moustache. Now we have left The European Union his visa will have expired so he can go back to where he came from.

Miss Marple, an old biddy from Saint Mary Whereever who should have gone into an old folks home at least a century and a half ago.

Sour grapes, is that a Shakespearian quote ? I think perhaps whoever coined it, actually it was some guy called Aesop who put it into a fable sometime between 620 BC and 560 BC wrote it to describe my introductory two hundred and three words above. Am I jealous of Agatha Christie’s success ?  Read on and find out.

With Poirot and Marple what you see is what you get. They are the same at the end of a story as they are at the beginning and so it is in every story. Christie does not develop her characters, their experience through the plot she takes them does not change them in any way. Take Shakespeare’s character Macbeth, he changes throughout the story line and ends a totally different person when the story concludes.  Romeo Montague is affected in every way possible by happenings around him while Agatha Christie characters are static.

If you take both Hercule Poirot and Miss Marple both have something in common, I do not mean the way their minds analyse motives and actions of murderers in stories but the way they speak down to the readers. Miss Marple, OK that was the way elderly spinsters addressed them selves in the time where the stories are set. She was what people used to call a maiden aunt. She had a name, Jane – Jane Marple. The origin of the name Jane means god is gracious and used as a female name it becomes gracious or merciful.  Is it a coincidence that Agatha and Jane have similar meanings, very similar meanings. Did Mrs Christie deliberately plan her character this was ?

What about Marple ?   The surname originates from Yorkshire and is not in any way related to the small town of Marples in Cheshire. Perhaps Agatha Christie chose the name with care and deliberation or perhaps she just plucked it from thin air. I guess I will never know.

No I am not a fan of Agatha Christie, I am perhaps a little bit jealous of her success but I would not particularly want to have success myself trying to write story line for Hercule Poirot of Miss Marple.

Why did Agatha Christie write what she did ?  How did she become so successful ? I penned these words ahead of my visiting her home at Greenway in Devon tomorrow. When I am there I want to soak up the atmosphere and try to feel close to the worlds best-selling writer in modern time. I want to try to understand why she wrote what she did and gave her plots to these two characters. I have spoken about character development, you know how I am going into tomorrow’s story so will I come out the same or change ?  Will Greenways develop my character. Will I suddenly find I like the writing of Agatha Christie ?  We will see.

Posted by The Sunshine Smile Crew at 20:36