This picture is of Golders Green Crematorium.

Opening in 1902 Golders Green Crematorium and Mausoleum was the first crematorium to be opened in London, and one of the oldest crematoria in Britain. Both Sir Herbert and Lady Fanny Leon's funerals were held there.

I have just sent the following e-mail to the crematorium.

Can I ask for your help ? 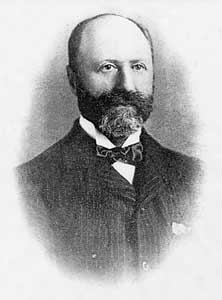 Green Crematorium. Do your records go back that far ?  If so can you tell me what they say ?
Sir Herbert's home was Bletchley Park, later in WWII to become the home of the codebreakers and now of international fame. I am actually a councillor for the area and in  the early 1970's lived in Bletchley Park for three years attending a teacher training college in the park.
In 1991 with a group of my students I researched the history of the Leon Family which we published in a lottle book: IN SEARCH OF THE LEONS. In January 2021 we are going to re-publish the book with updates. I would so much like to include information about his funeral.
I am assuming that in the 1920's ashes were not scattered in the way they are today. Do you know what became of Sir Herbert's remains ?
I have looked at your website, yours is a very beautiful place. In the New Year when, hopefully, life is easier than it is right now I would like to visit Golders Green and remember Sir Herbert who was such a great benefactor of our town. 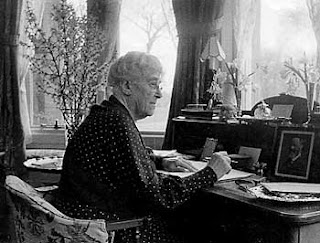 The 1991 project reunited the Leon Family with Bletchley Park, I am still in contact with the 4th Baronet and would like to share all I can find out about Sir Herbert's funeral at Golders Green with him.
Sir Herbert's widow, Lady Fanny Leon, died on 13th January 1937. Local records say her funeral was a strictly private event but was also held at Golders Green.  Do you have any record of her funeral and what became of her ashes ?
Any help you could offer in this matter would be received with much gratitude, will be included in the January republishing of the book and will help to raise awareness in today's community of two very special people from history.
THANK YOU  David Ashford
UPDATE - heard from the lovely people at Golders Green. The records department has asbestos being removed so we can not search for Sammy and Fanny Leon until the New Year.
I am becoming excited about adding new information to the re-publishing of our book. 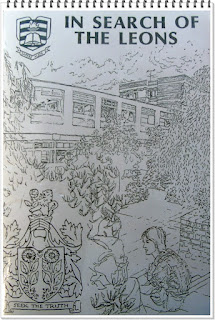 On Bletchley and Fennty Stratford Town Council's website there is something very lovely about the war memorial and the part the Leon's played. However, the Leons and Bletchley Parish Church were not exactly friends but did Leon play a part in that memorial ?  It is a real possibility that employees of the Leon Estate would have fought in The Great War and their names will be on the memorials. I am going to contaact Saint Mary's Chucrh to find out.
I have been homnoured not once but twice by firing Fenny Poppers. Did Sir Herbert fire a popper ?  The firing now takes place at Leon Recreation Ground.  I have to find out.
I have been trying for some time to lift Leon Bridge out of obscurity - Leon Bridge aka Denbigh Hall Bridge, but National Rail had failed to respond to my communications. Leon Bridge is not only a local landmark but of significant importance across the entire country's railway network.
My LEONITES. my wonderful beautiful LEONITES. I joined Leon School in January 1977 where I was briefly form tutor of 3 Blue before being promoted two terms later to Head of Year. 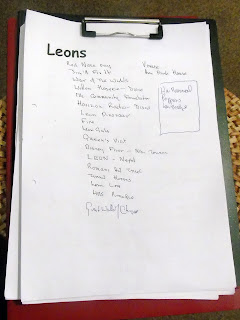 I am so proud to be incontact with members from 3 Blue and my year groups right up until I left the school in 1997.
Here is a brainstorm of ideas I want to include in a new chapter celebrating some of things the LEONITES achieved. To name just a few: Holding a fund raising event to launch a new Milton Keynes Charity Willen Hospice. Being right there on the ground floor when The Milton Keynes Community Foundation was started. Being featured in the press for the very first Comic Relief Red Nose Day.  Leon Dinosaur. And so many, many more.
I think The Leons would be very proud of what you achieved.
Sir John Leon wrote the opening page for the 1991 publication and that page will lead the 2021 re-publishing.  I want to ask two people to write the concluding page of the new work. More of that later. 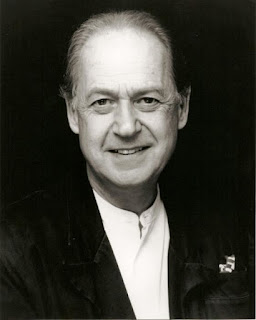 The picture on the right is John leon whose words open the book. He is a special person you know.
History v Heritage. Bletchley Park is now a museum. It dates back to The Doomsday Book and under the brief time Sir Herbert and Lady Leon were there it was the very centre of our community.  They gave us so much, so much which still exists around us today. That is heritage and not history. There is a difference.
In Search Of The Leons as a book is the number one authority on the Leon Family but since 1991 it has become in itself history. The republishing needs to change from history to heritage.
My original plan was to re-publish on Amazon as an e-book at 77p. Amazon's current publishing tools are a nightmare !  The review tool has not been operational for months. Trying to include formatted images just does not work. While the original book did have pictures I do not think they are really needed in the re-published version.
Here is a map of the Leon Estate. 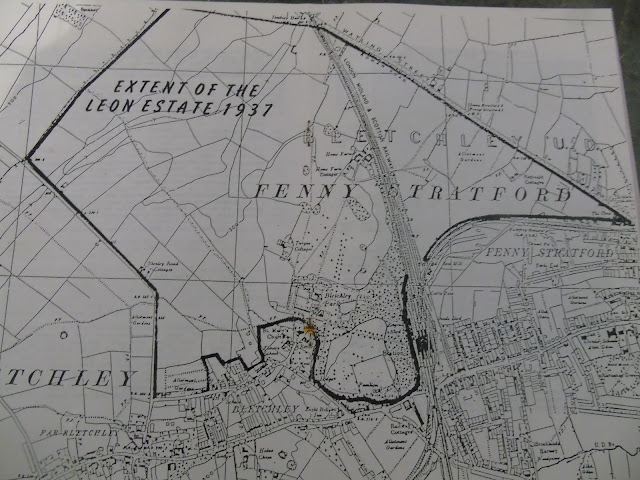 I am thinking that we probably do need to have a paperback edition, perhaps selling for £4.99. I will keep my fingers crossed that Amazon does not screw up formatting.
If you look at the map and try to put today's Bletchley on to it there are some things I need to check out before publication. 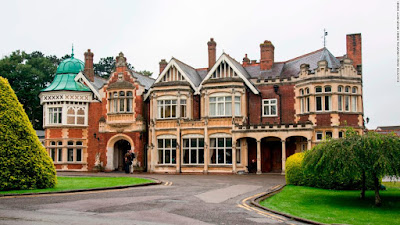 Sherwood Drive was not there in the Leon days, the estate ran all the way down to the railway line. I think I am right in saying it is named after a former town clerk. This I need to check.
It covers part of West Bletchley but not all. That we know today is built upon two farming areas: Home Farm which was Leon and Denbigh Hall Farm which was not. Home Farm was located near to the present-day Shwerood Drive. This was once a council transport depot but is now housing.
Did you know that when Harold Wilson's Government on 1st January 1967 designated an area of land in North Buckinghamshire for the building of a new city that was to be The New City of Bletchley ? Early planning moved to select an area from the central of the area nence Milton Keynes. However, had Sir Herbert been around there would have been no question, we would not be living in the New City of Bletchey. Milton Keynes never did become a city did it ?  For certain Sir Herbert would have determined Bletchley became a city !
I am rambling now a bit, sorry - blogs are meant to ramble after all. As I have been reading the original book I have felt close to Sir Herbert and Lady Fanny, almost as if they have been speaking with me.  I co-ordinated the original research with my students taking the lead when it came to the media etc.  I then did the writing bit. 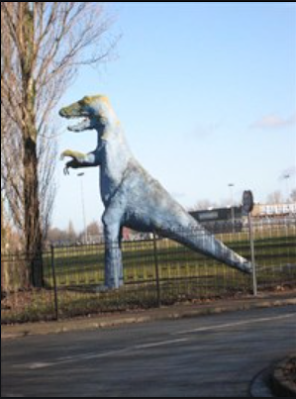 We had the Leon Family Crest made as a picture in coloured glass and I have a photograph somewhere of Leon students presenting this to Sir John. For the life of me I can not find it. I must.
One picture I do have is Leon Dinosaur and with this I'll bring today's blog to an end.
The idea was Headmaster Bruce Abbott's. He wanted a line of sculptures along the bottom of the school field. He told me to sort it !  I toned things down to just a single dinosaur then engaged community artist Bill Billings to make it happen.
Construction began shortly after the piublication  of In Search Of the Leons. Leonites, you keep telling me that a time capsule was burried at the location. I can not say that I have a recollection but if a time capsule was hidden then I rather think a copy of the original book would have been included.
When the new book is published perhaps we could place a copy together with a series of Leon pictures to create a 2021 time capsule.
What do you think ?
Posted by The Sunshine Smile Crew at 00:40