Swinging Through The Sixties - Part One 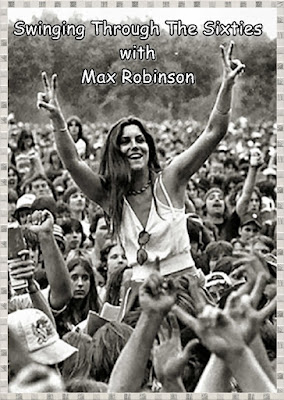 It is said that if you can remember the 1960's then you were not around at the time.

A while back I was struggling to make an on-line application for a passport. Not being able to figure out one part of the geeky system I called the helpline. The guy answering was very kind and helpful. I guess from the tome of his voice he was less than half my age.

"Can I confirm your date of birth ?"

"Unfortunately," I replied, "It is the third of November nineteen fifty."

"Unfortunately !," He exclaimed. "What do you mean unfortunately ? You grew up when all the best bands were playing !"

A friend of mine often says: The reason why no good songs are written anymore is because that have already been written.  True ?  An expression from the 1960's, it could be earlier: The proof of the pudding is in the eating.

Yes, I was born on 3rd November 1950. When the 1960's dawned on Friday 9th January I was only nine years old. Wednesday 31st December 1969 I had lived as a teenager through what can arguably be the most iconic decade in modern history.

Television in the 1960's was black and white. School was monochrome but life was sparkling with colour.

Some years ago I researched the number one hit records on my birthday. Obviously I started in the rock and roll fifties, moved through the swinging sixties and into the disco seventies.  I moved, reluctantly, into the 1980's but gave up in the 1990's as there were no good songs to listen to. All the good music having already been written.

All these ideas from my memories are like pieces in a jigsaw. As I write this autobiography I need to sort them and put everything into its place. Completing the jigsaw does not necessarily mean I will write in date order. What I am going to do in date order, however, is to tell you of the number one hits on the days of my birthday from 3rd November 1960 to 3rd November 1969. I will lay them out in my jigsaw as the corner and edge pieces of the picture. Does that make sense ? If it does then perhaps the first corner piece I set down has to be the number one chart-topping song from Friday 9th January 1960. It was:

What Do You Want To Make Those Eyes At Me For by Emile Ford And The Checkmates:

What Do You Want to Make Those Eyes at Me For is a song written by Joseph McCarthy, Howard Johnson and James V. Monaco in 1916. It was released in 1917 by Ada Jones and Billy Murray on Victor Records (catalogue number 18224). Thank you Wikipedia.

It became a UK hit in 1959 when a doo-wop version, produced by Michael Barclay, became a number one hit for Emile Ford and the Checkmates over the Christmas and New Year of 1959/60, having overtaken Adam Faith's What Do You Want ?  Its stay in the UK Singles Chart began on 31 October 1959 and lasted 17 weeks.The last chart-topper of the 1950s, it retained the number one position for the first three weeks of 1960 until it was replaced by Michael Holiday's Starry Eyed on 29 January 1960.

Thank you again Wikipedia, I never knew that. Do I remember the song from when I was nine years old ?  You bet I do.

If I were younger I would write a Phd thesis on the way music influences society and society influences the music that is written.  It was so in Tudor England, it was so in the times of Mozart and Beethoven. It takes on even greater importance when it became possible to record music. We can see the influence of music within both World War I and World War II. Things moved up a gear in the Rock and Roll 1950's with events of the 1960's completely changing teenage culture.

But we must not think that only teenagers spent their pocket money on records, Mum and Dad, Granny and Granddad also had an influence on the charts buying and listening to their favourite songs. I wonder if Granny and Granddad even give a second thought to music of the twenty-first century. The same could be said of this generation of teenagers.

Yummy Yummy:
What do you think in the early 1960's, for the pre-teenage kids like me, was of significant importance ?

Food rationing ended in 1954 and meals were generally monochrome for several years after. That said, there was never any shortage of food in my home. Breakfast, lunch and evening meal. Generally all cooked meals and no shortage of food. Perhaps a shortage of taste as the influence of rationing refused to go away. I am not speaking here just about the way it was in my home, it was exactly the same in the houses of all my mates.

Mums did the cooking at home, Dads did not dabble in the kitchen. I will talk more about meals, cooking and school dinner but right now I am swing through the sixties as a nine year old saying yummy, yummy.  Yummy, yummy here means sweets.

Malteesers, the sweet with the less fattening centre. Perhaps more true if said about Polo Mints. The mint with a hole.

Matleesers were brought to our taste buds back in 1937, I think this advertising and that from Mars I have shared with you may date a little bit later in the decade than when I was a kid. The slogan targeted Mateesers at ladies who did not want to put on weight but still desired a bit of chocolate.

Frys Five Boys Chocolate Bars ?  Anyone remember them ? Dating way back to 1902 a bar of chocolate with five different flavoured segments. Very popular in the early part of the Swinging Sixties but it had vanished by the time I ended my teens.

Could it be that eating Frys Five Boys was akin to cannibalism ?  Was it sexist ?  Nobody then knew what sexism was !  Women may have won the vote in 1928 but equal pay for women was still a little way off so political correctness did not come into it.

Political correctness did not come into the life of a child in 1960 where sweet cigarettes were by far the most popular form of confectionery. It was perfectly acceptable for any child to consume every day ahead of graduating to the real thing in not so many years times.

Time For A Drink:
Just as sweet cigarettes prepared we youngsters for the real thing so there were drinks to get us ready for the pub trade.

Shandy. You can still buy it today can't you ?  Providing you are able to walk. you can self-scan a case through a supermarket check out. Yes, you can but try to do that with a can of Red Bull and you will be asked to provide proof if age ID !

Shandy in the 1960's was designed to give the taste for a pint in the pub. I didn't take to shandy but I did take to the pub. I had my first pub experience when I was fifteen years old. I lie !  I was actually fourteen and three quarters.

What else did we drink ?  Ginger beer - BEER ! Why not call it Gingerade or Ginger Cola, again preparing the younger generation for the pub. Many families, my own included, home brewed our own ginger beer.

Lucozade was something we were given when we kids were ill. It was a treat to be ill !

Dandelion and Burdock, that was also very popular but I lost my own taste for it. Let me tell you what happened.

My grandfather was a great practical joker. One day when I was feeling thirsty he gave me what he said was a big glass of Dandelion and Burdock. I took a great swig only top find he had given me a glass of vinegar !

Some people did drink coffee in the Swinging Sixties but the likes of Starbucks and Costa would be dead in the water, water being by far a better choice than any of the swill they serve.

A cup of tea ?  Everyone drank tea, everyone but me. I was and to this day still am teat-total.

I should have said that we never called fizzy drinks fizzy drinks, they were POP. Pop came in glass bottles, pop being the sound made when you took the lid off. There was a deposit on these glass bottles which was refunded when you rook them back to the grocer's where you originally bought the. Supermarkets ? There were no supermarkets, not in my early Swinging Sixties days.

Coca Cola ?  Well, if there was nothing else to drink it was marginally better than water. Orange squash ?  Lemon squash ?  Lemon barley ? Water with a little bit of colour and even less taste in it.

There you go, food and drink kiddy-kid style just as I was starting to swing into the decade. If you, like me, were aged around nine years is that how you remember it all ?  If you come from somewhere distant in the future just look what you missed. You have my sympathy.

Time, I think, to put in another corner piece of the jigsaw. What was the number one hit on my 10th birthday ? 3rd November 1960. It was The King of Rock and Roll himself, Elvis Aron Presley with It's All Over Now.

Elvis Aaron Presley was born on 8th January 1935 in Tupelo, Mississippi. This hit came just eight months after he was discharged from the US Army
Posted by The Sunshine Smile Crew at 00:17