Swinging Through The Sixties - Part Eight 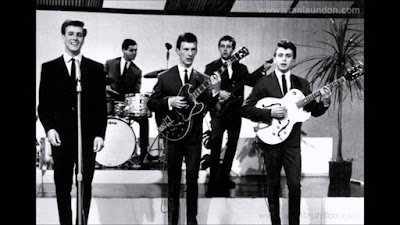 WISE WORDS FROM AN AGEING TEENAGER:
The BBC Radio programme which induces more people than any other to switch off or to retune is Thought For The Day. Pontificating vicars ego tripping their way to a fee funded by the licence payers.

However, when I was a teenager the minister of our local church did a spot on thought For the Day every day for a week. I listened to the tape recording my dad made and it was Ok, Ok bordering on good. The minister concerned was Reverend Roger Hall, better known as the Jolly Roger. Oh yes he was paid for his work, paid very well indeed.

My personal life motto is: LIFE IS A DISCO SO DANCE. There are others. Once upon a time, once upon a silly time, I thought I would bring them together and offer them to the BBC as a Thought For The Day series people may actually listen to. Common sense interrupted that life folly.

Inspired by The Reverend Jolly Roger and my teenage experiences giving foundation for the following let me share what never did make it to BBC Radio’s Thought For The Day.

·       THE BEST FOUNDATION FOR SUCCESS IS FAILURE

Life is a typo. If you do not make any then you are not living it fast enough:  It is a fact that the brain of an intelligent person works many times faster than his hands. Therefore, if writing or typing something which you are creating in your head your thinking is way ahead of the pen or the keyboard. If you look at a piece of draft writing and you find spelling errors and all the rest you are reading the work of a clever person.

When presenting a piece of writing I often say that I leave in the odd typo for those who take delight in finding them.

Computer spell checkers import typo’s. Oh yes they do. To slightly quote from My Fair Lady and Pygmalion: The Americans haven’t spoken English for years !  I am sure Microsoft should be changed to Microthick.  There is nothing more frustrating when typing up some notes than the little red underlining suggesting you have misspelt a word. You look at it and look at it and look at it again, you are certain it is correct but the spellchecker wants to convince you otherwise.

English grammar ?  Forget it. American computer systems will unpick your perfect grammar and call it Grammarly. Now see what I mean, I typed that word with a small case letter g but Microthick Word changed it to upper case. NO it is grammarly. Grammarly a rubbish programme which will destroy your writing.

Don’t even go near it. LIFE IS A TYPO IF YOU DO NOT MAKE ANY YOU ARE NOT LIVING IT FAST ENOUGH.

Life is a ballet do point your toes: I love the ballet, it is my favourite style within my favourite genre of music.  But you can not enjoy the ballet simply by listening to the music.  Ballet is not the music. Neither is it the dancing. There are five things within a ballet which have to be combined to make it work. The music, the dancing, the costumes, the scenery and the miming. No words are spoken in a ballet so mime is used in place of speech. Everything has to come together at the right time and in the right way. In my opinion the world’s number one ballet company is The Bolshoi in Moscow followed by The Royal Ballet in London.

You are dancing your own ballet every day as you live your life. Do not try to live that life using only one aspect, you need it all in the right portion at the right time.

LIFE IS A BALLET SO POINT YOUR TOES.

Life is like a vinyl record, if it does not crackle you are not living it properly:  I am writing here swinging through the sixties when vinyl music was king. If you look at popular music it  was only worth listening to during the years of vinyl. OK, yeh you can listen to something digitally from the 1960’s using today’s systems but if it does not date from the vinyl years then it is second rate. Why are no good songs written these days ?  Because they have already been written. Written in the vinyl years.

It could be argued that the technology of recording then playing back music via a vinyl record is more advanced than twenty-first century digital recordings. Certainly in its day it was way ahead of time. The word groovy meaning happy and more comes from the groves on a vinyl record.

The physical action of the stylus needle driving through the groves extracting the music slightly damages the vinyl. The more times the record is played the more it is damaged until it eventually starts to crackle. If you do not play the record it will not crackle. Ever. If you love the music on the record the crackle will grow and grow and grow. That’s like life isn’t it ? If you don’t do anything with your life it will just be silent. It will not be groovy. The opposite of groovy ?  Boring !  What kind of a life are you leading ?

Do you know who King Midas was ?  If, at any age, your general knowledge is up to it you will know that King Midas is popularly remembered in Greek mythology for his ability to turn everything he touched into gold. This came to be called the golden touch, or the Midas touch. So when you eat your cornflakes at breakfast they turn to gold. You need to blow your nose as your handkerchief turns to gold !

Never mind general knowledge, every teenager of my generation knew who King Midas was. In September 1967 The Hollies has a hit with King Midas In Reverse. Everything he touched turned to dust !

Something I remember saying to students when I was a teacher. Life can be a bitch and when it is you smack it in the face, kick it out of the way and get on with what you want to do.

When things go wrong in your life pound the failure into the ground and use the failure as the foundation stone for success.

One of the questions posed to teenagers in the school programme I am a part of is: What do you do when you attend an interview and are told you have not got the job. My advice to the teenagers is to think: Sod off then, you were not good enough for me anyway. Now I will go and find an employer who is worthy of my abilities !

THE BEST FOUNDATION FOR SUCCESS IS FAILURE

Life is like a football game – there is more to it than two goal posts and a bit of grass between them: That is actually something I wrote for a matchday programme at Sheffield Wednesday FC.

No matter how iconic the football ground there is not a lot to enjoy by sitting in an empty stadium looking at the grass and the goal posts. To bring it alive there need to be players, there needs to be a referee and linesmen, they call them assistant referees these days but I will stick with linesmen, and there needs to be a ball. But even all of this is not enough. To complete the atmosphere cheering fans are essential. The game is all very well but without supporters there is no atmosphere. The louder the fans cheer the better the players play.

All exactly the same in life.

A man who gives you money gives you nothing. A man who gives you his time gives you is life: I found that in something I had written in 1994. When I read it again I thought I was quoting from George Orwell or perhaps Mark Twain, it’s the sort of thing either would have said. Reading on I found I was quoting myself, I had said that by way of introduction to reporting on people giving their time to help others. I am quite proud of myself.

I do not like commercial charities, I never support them. Charities run as businesses where they want your money and only your money. Donate – Donate – Donate, constantly popping up on their websites. They are not interested in your heart, they cannot bank that. I am so tempted to name and shame some commercial charities but I invite you to check for yourself the pay levels of their chief executives.

Do not give money without love. One million pounds without love is worthless where one pound wrapped in love is priceless.

Life is a lot more fun if you are a little bit silly: I said that once to my granddaughter. The next day she was fooling about to which I reacted by saying: Don’t be so silly !  An enormous, ear to ear smile spread over her face. Ah but Granddad you said !

Life is meant to be fun. Every person on the surface of the planet should be charged with every single day making another person smile. This can be sone by being silly, it cannot be done by being stupid !  There is a difference.

In a disco there are fast dances and there are slow dances, there are dances where you are invited to do the actions. Life is like that isn’t it ?

Need I say any more ?

LIFE IS A DISCO SO DANCE