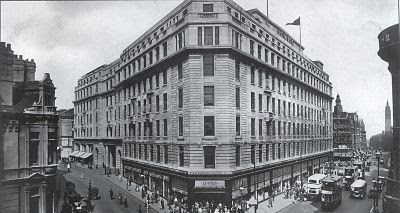 Store Detectives
Earlier I said that when I was at school I honestly did not  know anyone who had broken the law. At Boldmere High School For Boys in The Royal Borough of Sutton Coldfield we had all been brought up as good boys. In the summer of 1967, joining Lewis’s Department Store I was in for a bit of a culture shock.

People came to the store not as customers but as shop lifters. Thieves. Initially I had difficulty comprehending this but within a short space of time I just accepted it as something which had always existed but it was being engaged by people I had not previously comprehended exists.

What was worse was the fact that members of staff stole. Customers stealing but employees stealing from their employer was far more serious. When two lads a year older than I were caught stealing they were dismissed, the police were not called and no charges were brought, the two were just sacked. The store detectives typed a notice explaining the dismissal and pinned it up in the canteen. Some staff were outraged that the two should be named and shamed, they ripped down the notice within minutes of the detectives putting it up.  Surely that notice was a better punishment to receive than going to court, being found guilty and risking the possibility of a spell in prison.

It was a dark foggy morning, I was there on time but some members of staff were struggling to get to work. One was a lady in our department, I will call her Mrs M. She was a respected member of staff with forty years service working at Lewis’s Department Store. To help those who were not present when the store opened I went to the cash office and signed out the cash floats for their tills. When Mrs M arrived she was very angry, instead of thanking me she yelled at me, reprimanded me and did everything short of swearing at me. How dare I interfere with her till !  I was not interfering, I was just trying to help.

A few weeks later it became known that Mrs M has been stealing one pound a day, every day from her till. For a thief stealing cash from a till, providing the theft was small, was not easy. At a busy time simply ring up a sale £1 short and forget to give the customer the till receipt. Most customers did not want till receipts anyway. Then later with another sale take £1 extra in customer change and hide it away. Mrs M had been doing that for forty years.

40 years x 50 working weeks = 2,000 x 5 working days = £10,000. Mrs M had stolen ten thousand pounds. Converting that from 1967 to 2020 value it comes to a staggering eighty thousand pounds. What happened to Mrs M ?  She was quietly dismissed, she was not prosecuted and was allowed to keep her company pension. After forty years service the company always doubled an employee’s pension rights.

To avoid a customer suddenly reaching into a till and grabbing money we had a system called spares. On a busy day most of the notes would be removed from a till and taken to the cash office. On a Saturday it was often my job to collect the spares. Going round the tills in our department I would have a large sum of money in my spares bag. For a robber who knew the system it would not have been difficult to bash me on the head and grad the spares. I used to put a couple of bags of coins, usually pennies as these weighed heavy, in with the notes. If I was robbed I would swing the bag and hit the thief on the head.

On the ground floor the store installed something no other shop anywhere in Birmingham had, close circuit television cameras. Just four cameras on one floor. There was public outrage ! The newspapers and television news said this was a terrible infringement of human rights. Petitions were mounted to get the store to take them down. They were not taken down.

The store employed three totally inept store detectives. A Mr Wittham was the senior detective with a male and a female assistant. I am sure they thought they were related to James Bond and worked for MI5 !  They would sneak about the shop floors, hiding behind display stands and generally attracting attention to themselves. Did they ever catch any shop lifters ?  I doubt it. They would have made The Keystone Cops look like The Special Branch.

Let’s have a piece of music from my YouTube Channel, something which was a hit during the time I have just been speaking about.

YEARS MAY COME YEARS MAY GO – HERMANS HERMITS
Herman's Hermits are an English beat rock and pop group formed in 1964 in Manchester, originally called Herman and His Hermits and featuring lead singer Peter Noone. Years May Come Years May Go reached number seven in the charts, surely it deserved better than that.

Posted by The Sunshine Smile Crew at 06:43