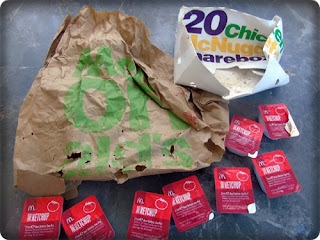 
The following text I shared on a blog last week:

The National Trust Stowe Gardens near Buckingham is a beautiful place. I have been a fan for many, many years. In these uncertain and difficult times a twice weekly visit to Stowe is of great support. Yesterday my wife, little Doggie Jake and I made our way to The Sleeping Wood at Stowe. I just could not believe what I saw there. McDonald’s food wrappers discarded and insulting the beauty of the landscape. I picked up the mess and brought it home.

I have not thrown it into the bin but carefully packed it and posted it to McDonald’s UK Head Office for comment.

Stowe National Trust Gardens every day working to save our planet. McDonald’s ?

Buckingham can proudly boast of it being a McDonald’s free zone so where did this mess come from ?  Possibly Milton Keynes but there is no evidence to support such a claim only that it came from McDonald’s somewhere. The McDonald’s Corporation did not obscenely throw this rubbish into the beauty of Stowe, of course it didn’t, but I find it so hard to comprehend the mentality of the person who did. Isn’t fast food meant to be eaten hot ? Having driven to Stowe from wherever and walked the distance to the Sleeping Wood this meal would have been cold. Why were eight packets of tomato sauce needed ? Why did McDonald’s hand out eight sauce packets, none of which were opened, to accompany its twenty chicken nougats ?

McDonald’s will hasten to say how it recycles its cooking oil into bio-diesel. It will claim that its excessive packaging can be recycled. Look at the paper bag in the picture, some poor animal resident of Stowe has attempted to recycle this rubbish !

McDonald’s will ego trip its way boasting of neighbourhood litter picks making sure such achieve maximum press coverage. Someone recently suggested that the car registration number of the purchaser be written on every piece of McDonald’s wrapping. What do you think to that McDonald’s ?  It would enable identification of your chicken nugget scoffing climate cowboy responsible for littering The Sleeping Wood at Stowe. Would you then ban the culprit from each and every branch of your chain ?

One of the biggest causes of global warming is animal farming, producing meat for human consumption. McDonald’s on a daily basis world wide how many cows and chickens do you
kill ?

Another major cause of global warming is wasting energy. McDonald’s operating 24/7 with excess lighting blazing into the night sky how big is the carbon footprint of an individual fast food outlet ?

The National Trust v McDonald’s, who would you support ?  When new government regulations are announced later this week, regulations to curb the pandemic, I hope The National Trust at Stowe will not be obliged to close but at the very least I hope there will be a dusk to dawn curfew on McDonald’s and every other operation which is actively harming our planet.

I didn't actually send the text and the rubbish to McDonald's, perhaps I am wrong but felt it would be a waste of time.

This morning at 4am driving to the radio studio I passed two branches of McDonald's which had been open all night. The lighting surrounding both was obscene !  I passed a branch of KFC - Kill Frightened Chickens where the lighting was not quite so outrageous. One thing in common with all - NOT A SINGLE CUSTOMER IN SIGHT.

If pubs and restaurants now have to close at 10pm why can fast food outlets continue to offer take away services ?

Leave aside covid, our planet is in a precarious situation. The excessive lighting is an issue but of far greater significance to global warming is the factory farming of animals for human consumption. I am guessing that McDonald's uses more animal meat than any other chain anywhere in the world. Close down McDonald's and there would be a significant reduction in global warming.

To be fair to McDonald's it does have a vegetarian menu, something Kill Frightened Chickens does not.

It is quite simple to slow global warming, to halt it and put it into reverse. All the little tinkering but governments discussing climate change can continue but TWO factors would make a distance.

1. DOUBLE the tree population in the world. Trees are the lungs of the world.
2, FOR THE WORLD TO STOP EATING MEAT. Close down fast foot outlets and a big step  froward would be made.

So in a global referendum on climate change which way would you vote ?


McDonald's or The Planet

Posted by The Sunshine Smile Crew at 20:45