Saturday 1st August 2020 - The Swinging Sixties
It is said that if you can remember The Swinging Sixties then you were not there !  I was there and I do remember the decade but how much of my memory has been formed in later years I can not say. Not a day in 2020 goes by without my listening to music from the 1960's. Yesterday, I drove through the centre of Sutton Coldfield in the West Midlands, as I passed places from my early youth the memories flooded back.

The decade began on Friday 1st January 1960, I was only nine years old and ended on Wednesday 31st December 1969. It began with rock and roll then ended with flower power. I am too old now but if younger I would love to write a thesis for a Phd debating how music reflects the society it is contained within.

Since lock down I have filled much of my time writing. I am now in the final editing stages of my book Milton Dreams The City That Never Was. Editing is the hardest stage in any writing, dead boring I can assure you. Milton Dreams is 60,324 words long. At 28,033 so far is the story I am writing Getting to Know my Granddad.

I am loving writing this story. At the centre of this is Philip Johnson, a disaffected and underachieving fifteen year old who under his grandfather's influence becomes Pip Diamond the biggest rock and roll star there ever has been. He even eclipses Elvis Presley.

On my own 15th birthday Ken Dodd was at number one with Tears. Fifteen years old and I 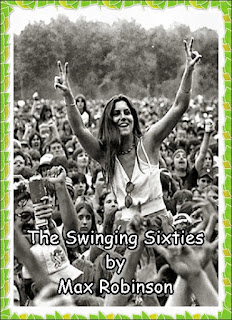 just could not wait to escape school.

I have been worrying about my next writing project. What to do when I bring Pip's story to an end, that will probably at the end of this month. I now have it, THE SWINGING SIXTIES. This will be my own fun semi-Phd thesis of my life in the greatest decade history has ever seen.

I am trying hard to resist writing that entire Phd as this single diary entry.

Do you recognise the picture I have selected for the cover. Woodstock August 1969. No, I was not there but on yes I do remember it, remember it so well. Half a million people celebrating the greatest decade history has ever seen
Posted by The Sunshine Smile Crew at 22:22