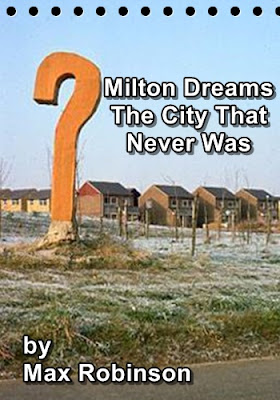 I am working my way through the 56,378 words for Milton Dreams The City That Never Was. I am still working towards publication w/b 24th August. I think the finished work will be about 62,000 long.

Quoting from my original book published in 1994 - Not The Concrete Cows, I was able to read from the pages and the laptop turned my words into text. You have no idea how many typo's I am now struggling to take out !

Last week my friend and former Mayor of Milton Keynes, Mike Barry, gave me lots of help for a chapter I have now completed about The Peace Pagoda. Following chatting with Mike I visited the pagoda and have written what I hope is a loving, peaceful part of the book.

While I was at the pagoda I decided that throughout the entire text I should turn up volume for The Milton Keynes Parks Trust and celebrate the work it does.  My original plan did not include The Milton Keynes Rose. I have been racking my brain as to where I could include this and have decided it merits a chapter of its own.

Last Friday was midsummer. Milton Keynes Development Corporation aligned Midsummer Boulevard so the dawn of midsummer would shine down this ley line. I was there at dawn with my camera but the low cloud and the rain hid the sunrise !

The book is a kaleidoscope through the legends, culture and history of Milton Keynes wrapped in my own personal memories of my adopted home.

Taking my original text from 1994 I have built on this to tell of the wartime Milton Keynes. Much of this story is centred on Bletchley but with the help of former Mayor David Hopkins I have been able to reach out into some villages and tell personal stories of those whose name now appear on the war memorials.

I hope there is a lot of fun for my future readers as I explore how Bletchley became the home for the invention of the TEA BAG. I am able to speak personally about Bletchley Park, I lived there for three years - no I was not a spy, but my Dad had an intelligence association with the park. Bletchley, of course, is home to The Lord of Loud without whom pop music all round the world would not be the same.

There is a major chapter about the history of education in our area. I look forward to a time when today's teenagers are in charge.

Milton Keynes has much of its origins in the Saxons who lived here so long ago. However, before then there were the Romans and Queen Boodica is significant in our history. In my book I bring together an argument that Milton Keynes should, indeed must, achieve city status. We have far more in our favour than almost every other city in the country,

Not The Concrete Cows was published in 1994, twenty-six years ago. Milton Dreams The City That Never Was will be published this year, 2020. Looking ahead twenty-six years to 2046 I want too publish a third book to complete the trilogy, Milton Keynes The City That Truly Is. I hope that everyone who reads my book will help make that happen and our dream become reality.

Contents for Milton Dreams The City That Never Was:
I have to work out where to slot in A rose by any other name would smell as sweet - this chapter will be more than an obscure reference to Shakespeare but will take the fundamental thinking of Juliette as she speaks these words and will apply them to The Milton Keynes Rose