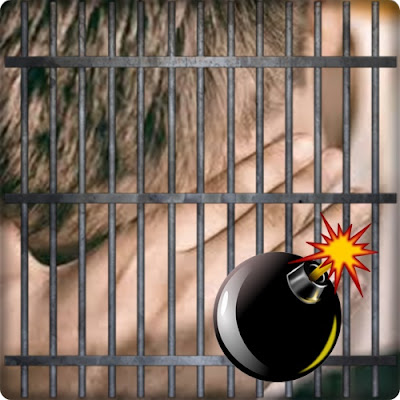 Yesterday I was speaking about vulnerable people in society. Today I want to speak about highly vulnerable people who our government is conspiring to destroy in a time bomb of mental health. Pandemic or no pandemic this has been going on for decades. I am talking about those in prison.  In writing I am drawing on bits and pieces of  my personal experience covering forty years.

The justice system is supposed to deal with an offender in three ways: Retribution, Reformation and Rehabilitation.

RETRIBUTION our prison system is very good at this. Basically it means getting your own back - eye for an eye and so on. Fair enough BUT - REFORMATION is something the system puts two fingers up to. Why waste time trying to reform a prisoner and stop him/her re offending. Why would you ever want to make the prison system redundant ?  REHABILITATION - sod that !  In Milton Keynes we have prisoners released into a situation of being homeless, only an armchair at night in which to sleep prevents their being rough-sleepers !

80% of released prisoners will re offend ! EIGHTY PERCENT. Would our NHS be acceptable operating at an 80% rate of failure ?  Schools, education - 80% failure rate !

You do not need  a Phd in criminology to understand why this 80% failure rate is in place. Prisoners go in to prison without a drug habit but come out with one. Suicide rates are high, too high. Silly idiots go to prison and come out as repeat offenders.

Just as there are supposedly three aspects to justice so criminals can be classified into three categories. There are those who have evil in their DNA, serial rapists and murderers, pedophiles. You are not going to reform them, best thing indeed is to lock them up and throw away they keys. Then we have major crime where people run this as a business, chances they are not going to be caught and brought into the system. The vast majority are stupid people and victims who were in the wrong place, situation and time. If the system wanted to these people could be so easily reformed but that is not what the government wants is it ?  Got to keep the prison population up and the best way to do this is to fail.

As head of year at Leon School I was involved in a system to work with teenage offenders. I bet that goes not apply any more. I once applied to join the education team at Bedford Prison, touring the prison the only people I found who talked sense were the prisoners. No thank you, I withdrew my application.

I expressed an interest in being a prison visitor at Woodhill Prison. Again once I had seen inside the prison I said NO THANK YOU.

I did do a little bit of prison visiting at another prison. From this I will share one experience. Lining up for admission I used to like speaking with family members, giving them advice and support to negotiate the cruel way they were treated. These people had not broken the law so why treat them like dirt ?  On one occasion waiting to be searched a screw, I use the word with purpose and the man had a screwed mentality, said to me; You are in the wrong line Sir, legal visits are over there. I explained that I was not a lawyer, just a visitor. This screw then said very loudly in front of all others Well you don't look like them !

About a year ago The Guardian published a feature on the failing privatised probation service. In September 2019 I was accepted by The Justice Department to have a community payback team work in the grounds of our local hospital but failure after failure after failure on the part of Thames Valley Probation prevented anything happening.  I engaged support from my member of parliament but then the pandemic took over and that was the end of that.

As I write there are 83,618 people in prison in the UK. England has the highest prison population in Europe.  Every one of those prisoners is currently denied visits from family member. They are locked in their cells for up to 23 hours a day. 23 hours a day without meaningful activity. many are denied proper medical attention for physical welfare. ALL are denied medical support for mental health issues, indeed the system is fast tracking depression and mental illness. If you treated an animal the way our prison population is currently being treated the RSPCA, pandemic or no pandemic, would come down on you like a ton of bricks.

Our failing justice system every day takes vulnerable people and amplifies their criminality. Right now as well as doing that a time bomb of mental health issues is being fabricated.  Just wait until that time bomb explodes !

Posted by The Sunshine Smile Crew at 00:31