Stepping up the level of failure 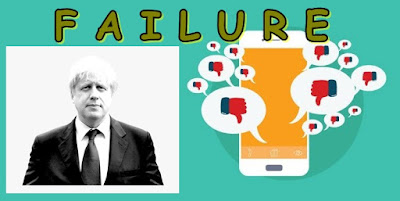 So the prime minister, do you remember who he is, now says he is to take personal charge of the fight against the pandemic.

So where has he been since lock down was imposed in March and if he was not in charge before yesterday than who was ?

Let's leave that as a rhetorical question for the moment. I will come back to it.

I write this daily blog primarily for myself, readers on Blogger each day now and then get into double figures.  I try to write for generations in the years, decades and centuries to come as a cyber time capsule.

When I began writing towards the end of March 2020 I thought we had in Boris Johnson a man who would be the greatest prime minister since Winston Churchill. How wrong could I have been ?

Let me list all prime ministers who have been in office during my lifetime and let me grade each in my arrogant and subjective opinion on a scale of 1 to 10 where Winston Churchill is 10 and Boris Johnson is 1.

The day before yesterday there were 324 deaths in the UK, yesterday the death rate went up by  more than 10% to 359. Even given that our failing government is messing around with a variety of measures which common sense says will add to the failure.  Correct me if I am wrong but all deaths in all countries in Europe do not add up to the 359 lives lost in the UK.

This can only be down to the failure of our government to properly lead the country. Back to my question, if Boris Johnson was not leading the nation then who was.  True, Johnson was seriously ill for a short period doing the three months of lock down but should that not have inspired him to "lead".

So who was leading ?  May I suggest we had a joint leadership in Boris Cummings-Johnson. NO, we should not be drawing a line under the Cummings affair. Drawing a line came from our failing prime minister. His saying yesterday that he will now personally lead the fight is just a revelation  that all along we have had a joint prime ministership in Boris Cummings-Johnson.

I hope I am wrong, I hope so much that I am wrong. NOT for the place in history of Boris Cummings-Johnson but for the lives of REAL people which will be lost in heartbreak and tears every day if we continued to be denied proper leadership.
Posted by The Sunshine Smile Crew at 22:34