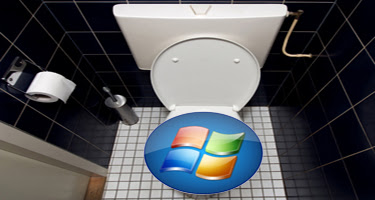 FRIDAY 12th JUNE 2020
I HATE MICROSOFT. Well everybody does don't they !


The day before yesterday I knocked a glass of orange juice over my laptop totally destroying it.  I purchased this replacement which I am now using Argoss click and collect. Before slagging off Microsoft I want to praise Argos for it's brilliant level of customer service. THANK YOU.

Two words which do not exist within Microsoft's lexicon are CUSTOMER and SERVICE. My new laptop comes complete with Microsoft malware which prevents any programme being downloaded unless it comes from the geek-failing windows collection. I can use Google Chrome but ONLY within Microsoft Bing Bong or what ever it is called. To install properly I have to switch off what Microsoft calls S.  But Microsoft refuses point blank to tell a user what S is let alone give advice as to switching the malware off.

Well anyway here I am writing today's blog page in ESCAPING FROM ARMAGEDDON. I am not sure that here in Britain we are escaping. Thing is if the technology of track and trace which is failing big time is run on Windows then it has failure built in as standard. If government scientific advisors re using Microsoft then Armageddon is smiling. Hey, now here's something for you to think about - Is Boris Cummings-Johnson a Microsoft robot ?  If he is then does that not explain a lot ?

I want to get my book Milton Dreams The City That Never Was finished and published as soon as possible as I have an idea for a new writing project - GETTING TO KNOW MY GRANDDAD.

I am setting this story in the year 2019 so predating the chaos we are all living in. The central character is Richard a disaffected and underachieving sixteen year old. His parents and his two older brothers are very successful in their lives but Richard is not sure he can handle success, it does not come natural to him. His grandfather on his mother's side is incredibly wealthy, he drives an Aston Martin, lives in a massif house and spends the cold winter days in The Caribbean.

Richard is curios about his grandfather so sets off to investigate his wealth and record his findings in a blog. The investigation and blog take him on a time travel adventure discovering his grandfather to be Tricky Dickie And The Diamonds. So that's it, Richard's granddad made his money as a diamond trader !  Or did he ?
Posted by The Sunshine Smile Crew at 01:42