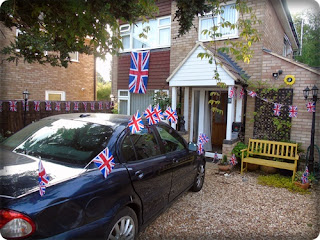 What are you doing today ?  I am celebrating being British.  Seventy-five years ago our nation was celebrating Victory In Europe the overthrow of a horrible regime that had destroyed the lives of so many. Victory against all odds.

The front of my home is proudly decorated with union jacks.

Let's go back eight years, 1940.  In the wildest dreams of anyone was victory considered a possibility ?  YES IT WAS - YES - YES - YES.  Nobody contemplated German occupation of Great Britain. NO - NO - NO !

In the eyes of possible defeat the only thing to be seen was victory.

Friday 8th May 2020 and our nation is again at war, at war with evil exported all over the world. We will win but ONLY if people can see nothing but victory. Those who want to open lock down for no reason other than their selfish desires, if we follow them then we will lose this war.

So Richard Branson sees his business empire going bust. Oh dear, what a shame - NEVER MIND. Please do not think for a single moment this nasty little man is considering the staff who will lose their jobs. If he was Branson would bail out is airline himself.

STUFF McDONALDS, KFC and all the rest. If they do open their doors boycott them. The community and staff are at the bottom of consideration, the desire to reopen is to keep money flowing into the pockets of franchise holders.

Would there have been room on 8th May 1945 for the likes of Richard Branson ?

Posted by The Sunshine Smile Crew at 00:30