Milton Dreams -The City That Never Was - Chapter Nine 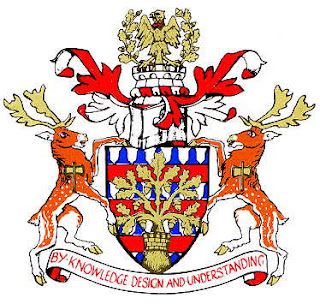 Drive into Milton Keynes along most roads entering the town and you will be met with a sign: Milton Keynes Better By Design. Who, I ask, is kidding who ?  Does Milton Keynes Council perhaps have a different understanding of the word design ?  Or could it be it does not know what the word better means ?

I am racking my brains to work out how many years ago - a long time I can assure you, since I worked with Mayor Gerry Neil. More than forty I think, I have just checked and found it was 1977. Heck, it feels like yesterday. Across the years I have been pleased to host many different mayors of Milton Keynes at many different events.

When Brain Baldry became Mayor he decided he wanted to come to Leon School where his son and daughter were students, he wanted to address the entire school and explain the Milton Keynes motto.....

I was given the job of organising the visit. I packed 1,200 students and staff into the sports hall. Mayor Brian gave a brilliant talk inspiring the students. That was in 1980.

By Knowledge, Design and Understanding. Mayor Brian stood before the assembly, took his mayoral chain in his hands and explained in detail the motto of our new city.  He wanted every student and every member of staff at Leon School to be very clear that this was the at the heart of our new city and what the words meant.

Knowledge began with The Open University then spreading out to every single school in the new city.. Design was the planning of Milton Keynes Development Corporation. Understanding was the way we would all come together to build Milton Keynes into a great city. That is how Mayor Brian explained his chain of office. He inspired everyone at that assembly. How many people today have the faintest idea what the motto of  Milton Keynes is ? How many mayors since Brian have gone out into the community and spoken about those words on their chain of office. I have worked with many mayors since Brian and not a single one has said anything to me about it.

Design. Take a ride to Central Milton Keynes and look about you. If design is meant to be a positive word then how can it possibly be applied to the monstrosity  you will see  before  you ? The architects responsible for that lot have never been to design school. Many would call this abomination The City Centre, until it is demolished and Milton Keynes Better by Design becomes truth a city charter will always be a dream !


BY KNOWLEDGE, DESIGN AND UNDERSTANDING

No, my tongue was not in my cheek as I wrote that paragraph. Let me put it back as I bring this chapter to an end. Mayor Brian Baldry was a businessman, well he liked to think that he was. He owned a taxi company, a small haulage firm and Bletchley Coaches. The wheels on the bus go round and round, well sometimes on some of Brian's buses they did but not always.

Following the success of Brian's school assembly he decided he would host a group of students at the new Milton Keynes Council offices. Brian sent one of his own coaches to the school to take us there.  I say us because again I drew the short straw and was put in charge.

Driving the short distance from Leon School in the south of Milton Keynes to the civic offices in the "city" centre the engine of the coach began to overheat. By knowledge and a lot of understanding the driver managed to get it to the "city" centre and park up outside the council offices. He blagged an empty milk bottle from reception and kept running in and out with water to top up the radiator. It was then my role to distract Mayor Baldry from what was happening. I smile now as I tell you the milk bottle which the driver was frantically using to fix the coach was from Taylor's Dairy, a dairy owned by a fellow council member and colleague of Mayor Brian, David Taylor who would later become mayor of Milton Keynes.

Mayor Brian what do you think ?   No I am not talking about your coach !  Perhaps if every Mayor during his year of office were to take an assembly in every school in Milton Keynes then as you did explain those words to the pupils it is possible their generation may be able to make our dream come true. However, I would not suggest the mayors try to explain Milton Keynes Better By Design, we should only tell the truth in our classrooms !
Posted by The Sunshine Smile Crew at 06:39