Milton Dreams - The City That Never Was - Chapter Eight 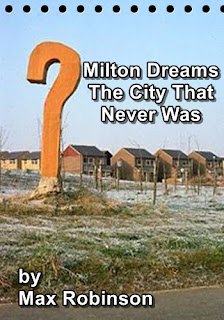 THE GREAT TRAIN ROBBERY:
Is what I am about to share truth or is it simply a legend ?

8th August 1963, I was twelve years old and remember it well. As the news broke the nation was stunned. Stunned but there was a bit of excitement and even admiration for the bravado of those involved.

A train carrying used bank notes from bank to bank was robbed at Bridego Bridge, South of Milton Keynes.  Get it right, there was no Milton Keynes then - South of Bletchley. The robbers got away with £2.6 million - £53.5 million in today's money.

The bridge has not changed a lot in fifty-six years and is, rightfully, a legend. But what is not known is how Bletchley features in this legend.

In 1971, shortly after I moved to live in Milton Keynes, I was given a tour of Bletchley by the man who had been the editor of the Bletchley Gazette at the time of the robbery. He told me the train was towed into sidings at Bletchley Station for the police to investigate. I have since been told that it was not the original train in Bletchley Station but another placed there for the media.

Bletchley played a major part in the investigation. Did it ? Or was it just a deception ?

In 1981 I was called to jury service at Aylesbury Crown Court where I sat in the very courtroom where The Great Train Robbers were sentenced.8th August 2019 I drove to Bridego Bridge and looked at the scene. The bridge has not changed but the railway has, Virgin Trains raced across it at speeds approaching 100mph. The train that was robbed was a TPO - Travelling Post Office. Postal Workers sorted the mail as the train moved along. Mail was picked up and dropped off along the way.

Do you know W H Auden's poem The Night Mail ?

This is the night mail crossing the border,
Bringing the cheque and the postal order.......

When you put a letter into a post box it becomes the property of The Queen until it is delivered. So, in effect, The Great Train Robbers were stealing from The Queen. Ronald Biggs, Charles Wilson, Douglas Goody, Thomas Wisbey, Robert Welch, James Hussey and Roy James - were jailed for 30 years each. Incredibly harsh sentences but set as an example to other would-be train robbers.

It's about ten miles from Bletchley to Bridego Bridge yet both are locked together in history and in legend. Either as the location for the police to examine the train or just for a replica to keep the media happy The Great Train Robbery has a legendary place in Bletchley.

COMING SOON:
City Of Trees
Maggie Came To Milton Keynes But The Queen Came To Bletchley
Transport Planning
and more.......
Posted by The Sunshine Smile Crew at 06:17