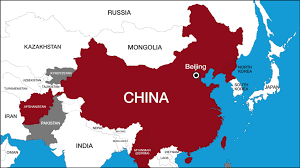 It is estimated that around 2,340,000,000 people have died in this pandemic. That is so frightening, can you compute that number ? I can't.

In the media today Donald Trump is accusing China of causing these deaths.    So is China guilty ?   Of course China is guilty !


Donald Trump claims he has seen evidence the novel coronavirus originated in a Wuhan laboratory - but has declined to give specifics.
Speaking at a White House news conference, the US president said China either could not stop the spread of the virus, or let it spread.
Mr Trump said he feels confident the virus came from the Wuhan Institute of Virology, adding that US authorities were "looking at it very, very strongly".
"We're going to see where it is - we're going to see where it comes from," he said. "There's a lot of theories."
"China might even tell us," he added.
Asked by a reporter whether he had seen "anything that gives you a high degree of confidence" the institute was the origin of the virus, he responded: "Yes I have."
And asked a few minutes later what gave him such confidence, he said: "I can't tell you that. I'm not allowed to tell you that."
The Wuhan Institute of Virology has dismissed the allegations and other US officials have downplayed their likelihood.
Chinese Foreign Ministry spokesman Geng Shuang said: "I would like to point out again that the origin of the virus is a complex scientific issue, and it should be studied by scientists and professionals."
He also said the US should spend its time on "better controlling the pandemic at home".
Though the origin of the virus has yet to be identified, it is widely believed it originated in a seafood market in the Chinese city, and the World Health Organisation (WHO) has said the primary source is probably an animal.
China is either guilty in the way Trump is putting forward or it is guilty by way of its dirty lifestyle that enabled the virus to form.
When the pandemic is over I believe firmly that every nation on earth should physically and economically close its borders with China.

Posted by The Sunshine Smile Crew at 00:14