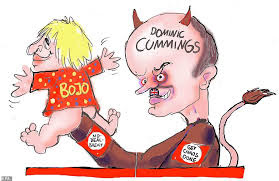 THURSDAY 27th MAY 2020
Today I really wanted to write something other than the failure of Boris Johnson to lead out nation and of of Dominic Cummings thinking he can manipulate the head of government to blindly support him.

As my regular readers will know I have tried, failed and become so frustrated with the media declining to support a major project celebrating four decades of love for our NHS. But the media is the media and the media will do what the media wants do so sod everyone else.

What right now is angering me more than anything else are the posts on facebook blindly following Boris Johnson, defending him without the writer engaging its brain.

The whole mess is a conspiracy of failure.

Boris Johnson is a failing prime minister, he is failing to inspire our nation in this terrible time, he is failing to lead from the front. Dominic Cummings is failing to do the honourable thing. The media is the media and the media will do what the media wants to do. The whole thing is propped up  by boneheaded lemmings racing to jump off the cliff while Boris and his all controlling mate stand by and watch.

During lock down we have seen some beautiful people giving so much, our NHS of course but also our Posties, Bin Men, Supermarket Workers, Police and so many, many, many, many more. We have seen a potential for a leaders to transform our society into something truly special but Boris Johnson is not the man to do this. I doubt there is a politician anywhere who would like to, who would want to and has the ability to achieve this.

Boris Johnson is  not going to resign, no way will he give up his ego trip. Dominic Cummings has made his arrogant position very clear. The media will do what the media does. The lemmings will increase their pace to jump off the cliff. You and me ?  We will continue to be an irrelevance in this conspiracy of failure.
Posted by The Sunshine Smile Crew at 23:59