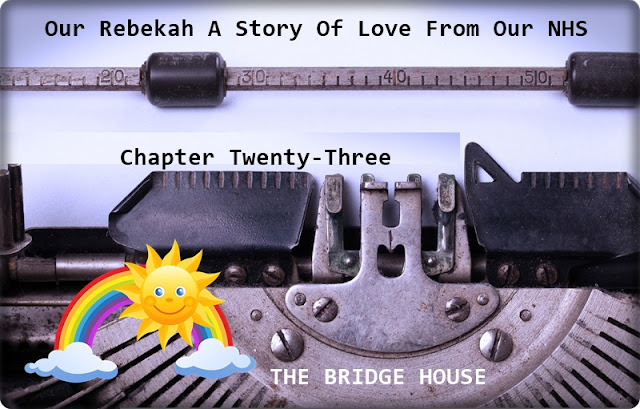 Seventy-three thousand four hundred and eight words. The Bridge House is my longest and I believe my best piece of work. It was published on Amazon in both e-book and paperback editions on 28th May 2018. Rebekah died on 19th May 2017. I began writing this book in August 2016.

In her final illness I took Beck to and from hospital appointments in both Milton Keynes and Oxford. For an entire month I went every day to either visit her in hospital or to take her to a clinic appointment. Hour after hour I sat in waiting rooms but never for a single second was I bored. This was my most prolific time ever as a writer.

Between 28th February 2017 and 26th April 2017 I took no fewer of my books than ten draft manuscripts and turned them into publications on Amazon.

The Bridge House was something I began writing as a gift for Rebekah. It was based around my grandmother Lily, I spoke about her in the opening chapter of this book. It began with the death of Queen Victoria and was planned to finish with the birth of Rebekah in 1983.

I wanted it to be a story centred around the times in which my grandmother lived but it was not going to be a biography. I kept members of the family firmly as they were, bringing them into the story, but fictionalised a lot around my grandmother. I created a fictional lover to make The Bridge House a love story spanning more than eighty years.

The first photograph is of my grandmother, a real photograph of her. The second is Lord Henry of Wilton her friend and lifelong love. 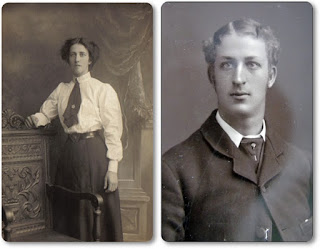 The Bridge House is the name of the house in which my grandmother grew up in the village of Madeley.

Nan was born in 1890. Our NHS was founded in 1948. In the early part of the story people are ill, Nan is ill and Lord Henry seriously ill. Had Rebekah been born when Nan was born she would not have lived to see her first birthday.

I was having a great time writing The Bridge House, my enjoyment I hope can be found when you read the first few chapters. This was Beckah's book, I was writing it for her so when she died I thought that was the end. I did not want to write any more.

Maureen then said I should not write the book about Rebekah, everything in the story was building towards Beck's birth but write the book for Rebekah. This I did and the change I would like to think life the story to new heights. I am not going to tell you where in the story but bits from Beck's life do appear. Also appear are firm hints about the wonderful love of our National Health Service.

Here is the opening of my book The Bridge House.

Joseph Bedson called all of his family members together for an important meeting. The Bridge House, as a name, sounds, very grand but when every member of the family was at home its modest proportions became only too apparent.

Emma, Joseph's wife, knew of the announcement and the gravity of the news her husband had within his duty to share. She would have to make an announcement to the school the next day and would have to decide herself how the children in her charge would mark the country's loss. How the family would do this was husband Joseph's responsibility.

Cecil and Olive, the oldest of the Bedson children, may have heard the news but would never have thought to talk about it until their father gave his permission. As significant as the happening was, the younger children probably would not have comprehended its meaning.  Lily, however, was different.

At eleven years of age, Lily Bedson was single minded beyond the station of a female and a child in Victorian Society. She had her own opinions and would voice them when she so chose. Although Joseph made every possible effort to treat his many children equally, Lily was his favourite. Even if pressed he would never have admitted to this. Emma could see his preference but would not have thought to challenge her husband. Lily took after her in so many ways, perhaps as the years went by time would mellow the daughter as it had the mother.

It had been many years since Joseph had returned home from work with his clothes dirty. The family members did not think anything of the fact that he had a smell of smoke about him. In the winter with The Bridge House never short of open coal fires to keep everyone warm and cosy this side effect of Joseph's profession could not be detected. That day, even though it was January, Joseph would not speak to his family until the bath had been set in the kitchen, water boiled and his body scrubbed. He would wash his hair and shave his face. Only when done and dressed in his best suit was Joseph ready.

"Members of The Bedson Family," Joseph began, "it is with much sadness I have to tell you her Majesty Queen Victoria, Empress of India, passed away yesterday at Osborne House on The Isle of Wight. Please stand and bow your heads in silent prayer to remember the life of our Sovereign."

Everyone did as they were instructed, keeping their eyes tightly closed and heads bowed until Joseph spoke again.

"Our thoughts must be with the Royal Family and our new King, His Majesty King Edward. God save the King."

Joseph had never known a monarch other than Queen Victoria and wondered what the future held. The new king was sixty-nine years of age, how long before he too passed away ?  Queen Victoria's children had married into the royal houses of Europe, she maintained a position as matriarch over them all. What would now change with her death ?  How would the Empire be without Her Majesty ?

"Father," It was Lily who spoke, "If Queen Victoria is dead does that mean I am no longer a Victorian ?  Am I now an Edwardian ?"

If you enjoyed that opening you can find the entire book at:

Posted by The Sunshine Smile Crew at 23:08