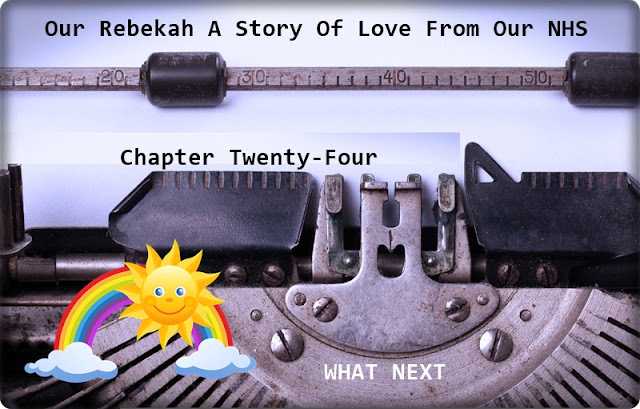 I do not treat my patients, I care for them. Doctor Philip Mason, renal consultant.

Writing Rebehak's biography I have not written chapters in order, I planned everything then wrote each chapter as the mood took me. This is hardest chapter for me to write and so I have left it until the very end.

Rebekah was so happy. She had Gary, she loved her job at Little Houghton Day Nursery and she was well. Holidays in the sun and she had Lucy Dog. The future was bright. But then she developed a chest complaint, a bit more than a cough and something she could not shake off. The doctors were having difficulty diagnosing it much less being able to treat it. I did worry that she was becoming unreliable at work yet Little Houghton Day Nursery was so patient and supportive. I thought back to when I was at Leon School, would I have been so patient had a member of my team had quite so much time off ? I doubt it ?

Rebekah was taking immunosuppressant medication to support her kidney and prevent her body from rejecting Louise. This meant she was prone to catching an illness others would not be troubled by. Then, out shopping on Saturday she tripped over a display unit and injured her leg. A couple of days later when she asked me to look at the injury. I immediately called an ambulance and she was taken to hospital. I remember so clearly the two paramedics who attended. Do those who work within our ambulance service undergo special training as how to relate to patents and relatives or is it something that comes natural to them ? It comes natural because they are such lovely people. People within out National Health Service who do not treat patients but care for them.

Patched up Beck was able to return to work after a few days but her leg was slow, very slow to heal. She was also fighting her chest complaint. And then her kidney function started to decline. Transplant kidney which Beck always called Louise was coming to the end of its life.

I immediately put myself forward again as a live donor. While I was a good match for Rebekah I was not close enough, a match goes beyond DNA and blood relation. However, since Beck was a child things had moved on within the science of organ donation. The transplant of a live donation does not have be direct, the donor and the recipient can be entered into a pool.

There was the problem that I was older, now in my sixties, but I was fit. Fit but during a routine test my GP found that my sugar levels were on the high side of normal so I was classified as being Type Two Diabetic. I protested, the important word was NORMAL, I was on the high side of normal, normal was the important word. I am not and never have been diabetic. I slightly adjusted my lifestyle, with Doggie Jake I was taking more exercise. I stopped drinking sugar drinks, I became addicted to Pepsi Max. I refused to take any medication but on paper I was still Type Two Diabetic. This was going to be a problem.

A blood test was taken which showed my sugar levels were normal. I then had to drink a full bottle of Lucozade. Yuk ! An hour later another blood test was taken. Guess what ? My blood sugar levels had dropped ! Type Two Diabetic ? NO WAY ! However, on paper I was type two diabetic, that combined with my age and weight the advice was that surgeons in transplant hospitals up and down the country were not likely to want to take a live donation from me. I was disappointed but not thrown into a pit of despair as I had been when Rebekah was a child, I just accepted the situation. Rebekah would be prepared to go on call but the chances were not good.

We were back to dialysis and CAPD – Continuous Ambulatory Peritoneal Dialysis. Preparations were made.

Clinic visit after clinic visit to Churchill Hospital in Oxford were made. I am sure my car could drive itself there. Getting to The Churchill Hospital is easy but parking is far from easy. No matter what time the clinic appointment was set for it was essential to be parked no later than 8am. Parking charges were not excessive, I object to hospital parking charges but it is government which is at fault not the hospitals who should be criticised for charges. I would have happily paid £100 an hour if it helped my darling daughter get well.

At Milton Keynes Hospital charges were refunded. That was a lovely gesture.

I have to share this special anecdote. Rebekah was at the clinic in Milton Keynes Hospital, Husband Gary was with her not me. It was decided that she needed to be moved to Churchill Hospital in Oxford. She needed to be moved by ambulance not by car. As time went by and no ambulance was assigned Gary started to get anxious. I knew that if this was an emergency the ambulance would be there immediately completely with blue lights and sirens. The wait was reassuring.

Eventually an ambulance was assigned and the journey from Milton Keynes to Oxford was made. It had been a long wait. The transfer took place two hours after the nurse who had been on duty should have gone home. She did not go home, she remained in the hospital for two hours of unpaid overtime to care for Rebekah. She was not treating Beck, she was caring for her.

The following week-end Beck's brothers went to the hospital to visit her. Here is a picture of Brother Peter and Niece Katherine.

I am not sure if this photograph was taken on Saturday or Sunday, I can not remember which day Peter visited and which day Matthew came. It was the day when Matthew and his son Adam were with Rebekah. She fell back as if she had fainted in bed. I went to find a doctor. A junior doctor came immediately and saved her live. He oxygen levels had suddenly dropped, I do not know why but if it had not been for that doctor Rebekah would have passed away. 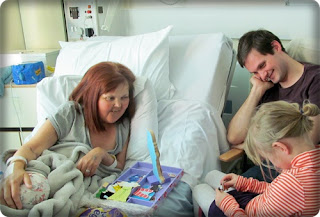 There then followed four weeks where I either took Rebekah to a clinic appointment in Oxford or Milton Keynes or visited her in hospital. Every day she was not treated in either hospital but was cared for, cared for with love.

The plan was for Rebekah to have CAPD -Continuous Ambulatory Peritoneal Dialysis. Needing to attend the renal clinic in Milton Keynes Hospital so many times in a week Beck moved to live at our home. She made her bed on the settee in our front room and would lay for hours with the dialysis fluid passing through her body. I kept telling her that she needed to get up and walk about but even though she was smiling and her spirits were good she was weak.

Going to the hospital I would park not at the front near the main entrance but round the back near to an entrance to a variety of departments one of which was the renal unit. I would pull close to the door, find a wheel chair and settle her in. I could then move the car to a proper bay before pushing the chair inside, into the lift and up to the renal clinic. I would then patiently sit and wait. It was during all these clinic appointments that I occupied myself writing. I wrote a couple of thousand words every day.

I tried to prepare Rebekah for the fact that she may well have to give up working for the rest of her life. In part my saying that was to prepare her for such an eventuality but also to give her a bit of a kick. Those words from her childhood: Fight Rebekah, fight !

It never occurred to me that she would not achieve sufficient a level of recovery to lead some form of restricted lifestyle.

Maureen and I were due to take a short break and holiday in Devon, just a few days. Rebekah was showing some signs of improvement so she went back home to Northampton with Gary looking after her. Every day while we were away I spoke to her on the phone, she sounded well and happy. Things were looking better. Rebekah asked us to come for tea on Sunday 21st May. That was a good sign, Maureen and I were looking forward to it.

I love music, I have since my childhood. My car has not one but two CD players in it. I love classical music, I love opera, music from the ballet, rock and roll, swinging sixties, disco seventies and am partial to a bit of punk rock. Rebekah did not buy me a punk rock CD but Andre Rieu's Love In Venice, both the audio CD and DVD. This is now a treasured possession. The song Santa Lucia which I can not play without a tear coming to my heart, I took and wound into the book I was writing The Bridge House. It is now central to the entire story line. I am listening to Santa Lucia right now as I write thee words.

It was early on the morning of Friday 19th May 2017, two days before Beck's tea and he intending to give me the Andre Rieu CD, my phone rang. I thought it was Rebekah screaming down the line. I asked her to calm down and tell me what had happened.

It was not Rebekah but Gary. “Rebekah's stopped breathing,” he said.

Maureen quickly dressed and I drove as fast as I could to Northampton. Two ambulances were outside her home. Rebekah was dead. A blood clot in her leg had moved to her lung and stopped her breathing.

Posted by The Sunshine Smile Crew at 23:11