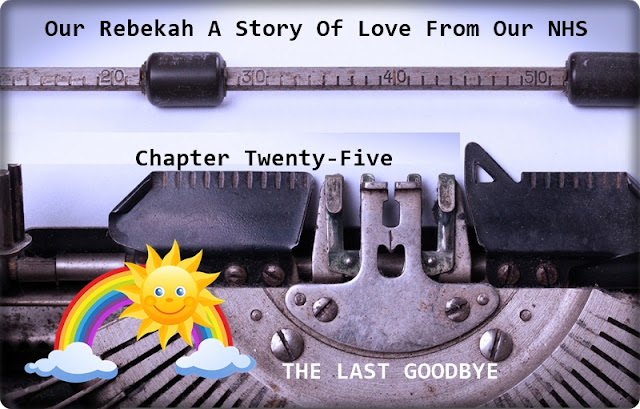 We have a tradition in our family that we organise and run our own funerals. In my will I have my own funeral planned with all the music, poetry and so on carefully planned. We have in Milton Keynes a beautiful crematorium at Crownhill. I have heard the management there say that it is built on ley lines of love. It is ! I was fortunate enough to be able, a short while ago, to tour Crownhill where I was chairs could be moved into any formation the family wanted, there could be any music and the funeral could follow any style. I smiled and said: Could I please have a disco ? I meant it !

Rebekah had left very specific instructions. First of all her funeral was to be a party. Nobody was allowed to be sad. She was not to be wrapped up in a dark coloured coffin. She wanted to be dressed in blue and white, as a Sheffield Wednesday fan these of course are the club colours. Chell who had so faithfully been with Rebekah on every visit to the operating theatre was to make the final journey with her.

Rebekah left us on Friday 19th May 2017. There was going to have to be a postmortem which I found very hard to cope with. This also meant that the funeral would have to be delayed. It happened at 3 o'clock on Tuesday 6th June 2017. There are two chapels at Crownhill in Milton Keynes: Willow and Oak. Previous family funerals have taken place in Willow, the smaller of the two. Willow was not available, Rebekah was going to have to use Oak which is much larger. I was nervous, it would not be good is only a small number of people turned up.

We worked to plan the funeral. Rebekah had said she wanted The Last Goodbye by Billy Boyd to be played. I worked to make a slide show of pictures from her life to be displayed on the chapel's video screen while the music played. Maureen and I would lead the service which was non- religious, Peter and Matthew would speak and Beck's friends would play a part. If this does not sound strange I was looking forward to the funeral, I was looking forward to a celebration of my daughter's life. I was, however, very nervous indeed, what if not many people turned up ? In the big Oak Chappel it would be silly.
Do you ever check the weather on-line ? Have you seen how The BBC changes its mind every few minutes ? From sun to cloud to rain The BBC was covering all options Rebekah was always known as Little Miss Sunshine, how could she leave us on anything but a sun shining day ?

Two cars arrived at our home. One had Rebekah with the second to take us to for her to say her last farewell. The sun was shining.

At Crownhill so many people were waiting for Rebekah. Everyone was following Rebekah's wishes to wear happy bright clothes. The sun was shining.

It took quite a while for everyone to file into Oak Chappel. It was standing room only. The Sun was shining.

As the service progressed I kept cracking jokes about the weather. We had asked friends to make cakes and bring them to our home where we would all gather in the garden for a party. Please sun shine, please ?

The service came to its end, I repeated the invitation for everyone to come to our garden for a party. Please sun shine, please ?

In an earlier chapter I told you how Billy Boyd had met Rebekah at Collectamania. 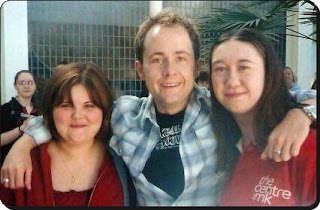 The music started to play, the slide show I had carefully prepared appeared on the screen for all to see. Billy started to sing. The sun was shining and Rebekah was smiling.

Posted by The Sunshine Smile Crew at 23:15