I Love Our NHS - second chapter in Rebekah's story - DRAFT

SOMETHING IS NOT RIGHT

Peter and Matthew developed quickly as children ahead of all stated norms. Rebekah, however, was behind the normal child development patterns. Trying to get her to eat was punishment. Maureen took her to see our GP.

When I came to live in Milton Keynes in 1971 when the new city was little more than an idea on a sheet of paper the teacher training college I was to attend made it a condition every resident student became a patient with a local doctor, Doctor Jarvis. I will speak of Doctor Jarvis later but our GP in the early 1980's and to whom Maureen took Rebekah was Doctor Labrum, Doctor Labrum who had made those loving home visits each time a new baby was added to our family. Doctor Labrum referred Beck to Milton Keynes Hospital, the first of many important stepping stones within our NHS that saved her life.

A hospital in the new city was not scheduled within the early planning and so its opening was quite recent. As I explained in the earlier chapter, although the hospital was open at the time of Rebekah's birth we elected for her to join the world at the Royal Buckinghamshire Hospital in Aylesbury. This was my family's very first encounter with what was then called Milton Keynes General Hospital. Today if you were to speak to the chairman of the hospital's board or its chief executive officer and mention my name they would say something like: Oh that guy – He never stops shouting his mouth off about the hospital. No, I don't. To give our hospital its correct name it is University Hospital Milton Keynes, to me it is Milton Keynes Amazing, Beautiful, Loving, Incredible Hospital. I as I tell more of this story you will understand that I under estimate our hospital but back then my family's first encounter was with Milton Keynes General Hospital.

The doctor took blood samples to run a series of tests. We were contacted within a few days asking for Rebekah to be taken back to repeat a test as one test was not giving a normal result. The test was duly repeated.

At Leon School where I was one of four heads of year running our own cohort of pupils I brought into school a man I was introduced to who was working to set up a new charity in Milton Keynes, a charity which was to become Willen Hospice. What he said interested the teenagers and enthused me. There as at Leon a new headmaster, Bruce Abbott, Mr Bradshaw having retired. Before he retired Bradshaw set up a school disco an put me in charge. To support this new charity, Willen Hospice, I persuaded Headmaster Abbott to let me run a twenty-four hour sponsored disco in support of the charity. It was in the early evening of the Friday at our sponsored twenty-four hour disco Maureen came to Leon School to tell me the results of Rebekah's tests.

Rebekah, the first Ashford girl to be born in one hundred years, had chronic renal failure. The test our amazing hospital had repeated after skilful diagnosis was to measure a substance called creatinine in her blood. Creatinine, that was a word I was to become so familiar with in years to come. Creatinine is a waste product from the normal breakdown of muscle tissue. As creatinine is produced, it's filtered through the kidneys and excreted in urine. Doctors measure the blood creatinine level as a test of kidney function. Rebekah's kidney function was way below normal. I remember so clearly Maureen standing with me outside the disco hall with everything written on a piece of paper. Included on that paper were the words kidney transplant. Surely not, my daughter was not so ill that she would need a kidney transplant. No.

Since the day she was born Rebekah had been suffering from reflux. Very simply, where the tubes from the kidneys enter the bladder if they are not aligned properly urine will flow back up and damage the kidneys. Rebekah's kidneys were damaged beyond a level where she could survive, she was indeed going to need a kidney transplant.

Before then the refulx, that is what the backflow of urine is called, had to be stopped. A n operation would be performed to cut the tubes, insert them at a different angle and stop the backflow. That was the first of many operations Rebekah was to go through in London's Guys Hospital. Her favourite doll was Chell. Chell went down with her to the operating theatre as she did with every operation my darling daughter would receive.

And so began a life-long love affair with our Amazing, Incredible, Loving National Health Service.

At Guys hospital I was to meet some very special people. Professor Cyril Chantler, Dean of the Medical School and paediatric renal consultant. Geoff Koffman, transplant surgeon. Sue Rigden, paediatric renal consultant and the beautiful lady who ran the clinics. Geraldine the sister in charge of the renal clinic. Sisters Maggie and Theo who ran Dickens Ward. It was years later that I met a consultant who said these words to me: I do not treat my patients, I care for them. Those words describe perfectly our Amazing, Incredible, Loving National Health Service.

Two pictures if I may, pictures to share as I bring this chapter to an end.

Here is Rebekah in Dickens Ward on the ninth floor of Guys Hospital Tower. By her side is Chell who went down to the operating theatre with her. 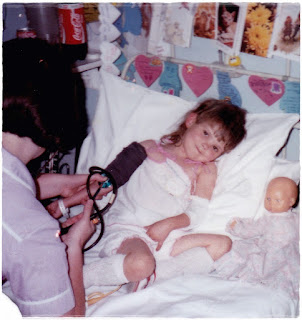 And here is Rebekah on 20th February 1983, photograph taken in The Royal Buckinghamshire Hospital on the day she was born. 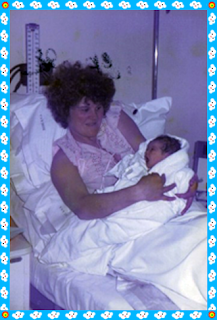 Posted by The Sunshine Smile Crew at 02:13