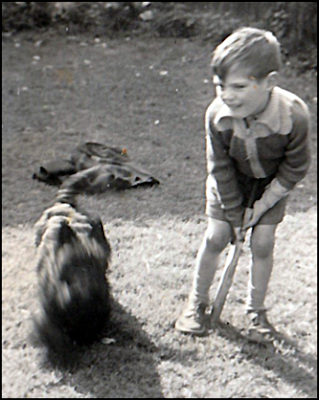 
When a friend gave me the idea to write a science fiction novel I was nervous. I now have seventeen books published on Amazon but never before have I tried to write in this genre.

In the story I am about to discuss with my great-grandson childhood ailment from the 1950's.

I would have been about four years old when I contracted measles.  I remember so clearly our family doctor, Doctor Reeves, drawing my bedroom curtains. For a child suffering from the measles light could damage the eyes. Every child caught the measles, it was considered the earlier you went down with it the better.

I caught the mumps, I know I did but that is an illness I do not remember.

Chickenpox. That was actually fun. Yes, it itched but picking the scabs and seeing how many you could pick was actually a bit of fun.

As a young teenager I was always coughing, every winter I had a cough. My Dad was always marching me off to the doctor. His Dad had died of tuberculosis and he feared I had it. So many times I remember the doctor telling Dad that tuberculosis was not hereditary,

The one disease you did not want to catch was  scarlet fever. In my parents and their parents generation catching scarlet fever was a death sentence.  The clothing and bedding of anyone who contracted scarlet fever had to be burned. I remember so well in Birmingham there was The Wittan Isolation Hospital for patients of this and other highly dangerous infections diseases.

I was about ten years old when there was a major outbreak of smallpox in Birmingham. Everyone had to be vaccinated. With my Mum and brother I queued up for hours all the way down the street to receive my vaccination. The virus was brought into Britain by a man from Pakistan. At school we all received a special lesson explaining what the disease was all about and the work of Edward Jenner overcoming it.

Talking of lessons, when the AIDS virus - Acquired Immune Deficiency Syndrome all schools were issued by the government with a video and strict instructions as to how students were to be warned against the disease. Any discussion of gay sex was strictly off limits.

When I went to Egypt for a holiday I had to be vaccinated for Diphtheria, Tetanus and Polio, Hepatitis A and Typhoid. The needle for that injection was stuck in my backside. Owch !

Going back to my childhood I remember my Dad contracting Yellow Jaundice or some form of hepatitis, not sure what.  He originally contracted it during his RAF service in Egypt. It was supposed that a person could only contract this once but my Dad proved that theory wrong.

The population of Europe in the middle ages was a fraction of what it is today but around seventy-five million died from Bubonic Plague or The Black Death.  The world death figure for corona virus today stands around one hundred and sixty thousand,

In  the late 1980's I used to take my daughter to the renal clinic at Guys Hospital in London. A construction site on a vacant area of land in the hospital uncovered a plague pit from the time of The Black Death.  Tall hoardings were erected not to stop the plague spreading into the hospital, the microbes were long dead, but to prevent people from seeing hundreds of skeletons being removed from this ancient mass grave.

So as I write more for my book today ALIENS IN TIME my fictional great-grandson who I am calling William and I will be chatting about these memories.

Posted by The Sunshine Smile Crew at 23:48