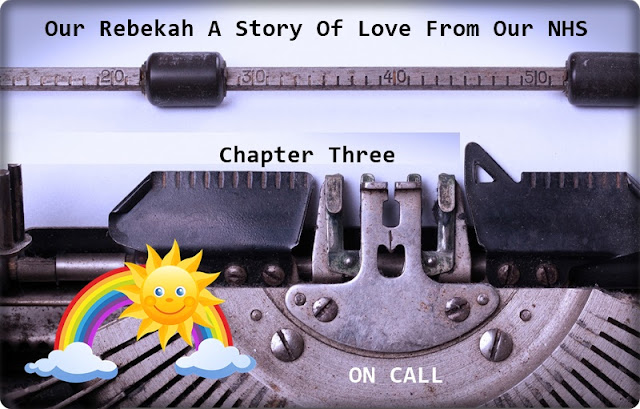 It was easier for me to take Rebekah to and from the clinic at Guys Hospital than it was for Maureen. Initially we would go once a month. Those early visits were always made by train from Bletchley to London Euston and then by Underground to London Bridge. The hospital would reimburse travel costs but I did not claim, I felt guilty. Then Doctor Sue Rigden insisted saying the funding did not come from within the NHS. I gave in but when I stopped using the train and started to drive to London I did not claim.

Leon School Headmaster Bruce Abbott was a wonderful source of support, as were my fellow teachers – most of them, and ALL of the pupils in my charge as head of year. I am going to talk more about them later. Mr Abbott came to me one day and said: Will you stop putting in forms for unpaid leave to go to the hospital, when you do that we have to process them. Just tell the office you are not coming in and we will do it unofficially so you get paid !

My Mum's Mum, Nan Robinson was quite a character. She died shortly before her one hundredth birthday. For a time she was in hospital somewhere near Old Street tube station, after the clinic Beck and I would go to visit her. She was there for a few months so our visits became quite regular.

Nan and Rebekah became close and would write to each other. 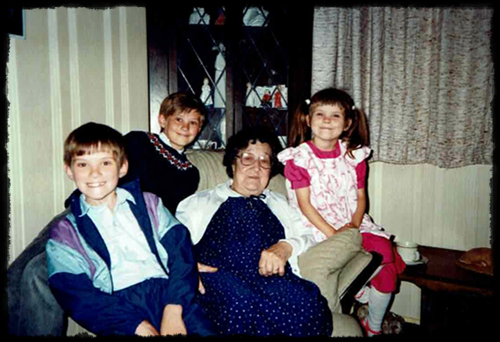 Matthew on the left, then Peter, Nan in the middle and Rebekah on the right.

We were not just celebrating the love of our NHS for beck but also for Nan.

Doctor Rigden said to me at one clinic keeping Beck's failing kidneys working was like driving an old car. If you were gentle with the accelerator and used the gears you would get far more life out of it than if you thrashed it. All of Rebekah's results and medication were recorded at the clinics in a small green notebook. I knew its entire contents by heart. The hospital was carefully and expertly balancing everything until it was the right time for her to receive a kidney transplant. Subconsciously I had every faith in the doctors but my daughter was very, very ill and there was a chance she may die. The doctors never considered this possibility and I tried hard to keep it at the back of my mind. Rebekah, young as she was, knew what her chances are yet never stopped being positive. She was always smiling, a photograph does not exist where she is not happy and smiling. She was our Little Miss Sunshine. From the day she was diagnosed with kidney failure our Amazing NHS was caring for her kidney function ahead of a transplant. On the day she was diagnosed, that very first day, the NHS transplanted a smile on her face.

Dialysis was a possibility but it was not seriously considered. I remember a mother of a boy at Leon who was receiving home dialysis, there was a Portakabin hut in the garden where she had to connect herself to the machine for a couple of hours every day. She said to me how she would lay there worrying about what mischief her teenage son was getting up to. Home dialysis was expensive and not really suitable for a young child. Beck's kidney function had to be maintained until everything was ready for a transplant.

Opposite Leon School was Water Eaton Medical Centre where one of the GP's was Doctor Karia. He and I used share transport for his sons, Peter and Matthew. He is a lovely man and was a great support as a friend. He would explain medical things to me in simple layman terms. He was not part of Beck's medical team but he was a part of our NHS so by instinct would go the extra mile. There was some form of carer's allowance, the name of which escapes me. Doctor Karia kept telling me to apply for the benefit. It was money to pay for extra washing of clothes, bedding and everything associated with a chronically ill child. I just could not face the red tape so did not apply. I don't qualify, I said to him one day, and anyway how do I get the forms signed ? You DO qualify, Doctor Karia insisted and as I am the doctor who signs the forms I assure you the money will be paid ! Thank you Doctor Karia. 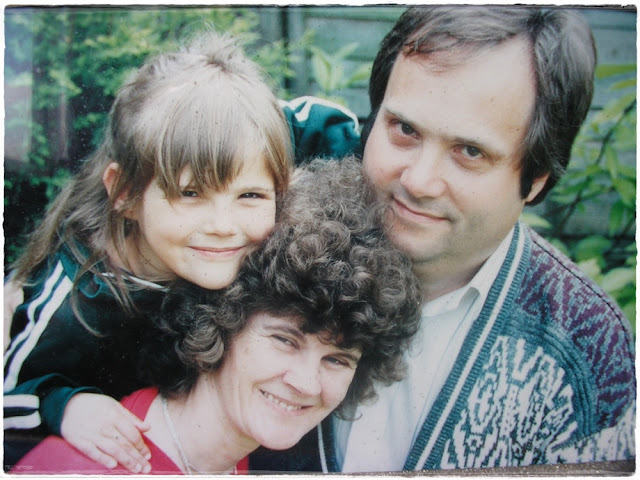 I am a writer, I have been writing stories since I was a teenager. I secured a weekly feature with our local newspaper, the Milton Keynes Citizen, for which I was paid quite generously. As I have explained money was not an issue but Beck's illness bring additional costs, this money together with the benefit Doctor Karia so kindly arranged helped in a difficult time.

One of the features I put on my page was with a lady Elizabeth Ward. 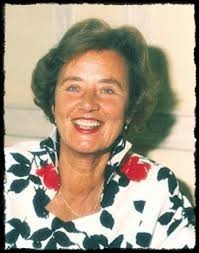 Elizabeth Ward's son Timothy, known as Timbo, died in Guys Hospital from kidney failure. Elizabeth, a formidable lady with many powerful friends and contacts set up the kidney patients association and introduced the kidney donor card. Formidable with powerful friends Elizabeth was also a lovely lady. I spent a day with Elizabeth in her home, we talked about Rebekah who she firmly put on her radar.

The kidney donor card became the organ donor card. As we talked Elizabeth told me that the day would come when the card became redundant as everyone would naturally wish to donate on their death and their relatives would support them. All these years later we are not quite there but Elizabeth's prediction is coming true.

Do not take your organs to Heaven, Heaven knows we need them down here !

I remember Rebekah having a donor card. She showed it to me and pointed where she had crossed out kidneys in the list of organs. You can have everything else, she said, the kidneys don't work !

Posted by The Sunshine Smile Crew at 01:05