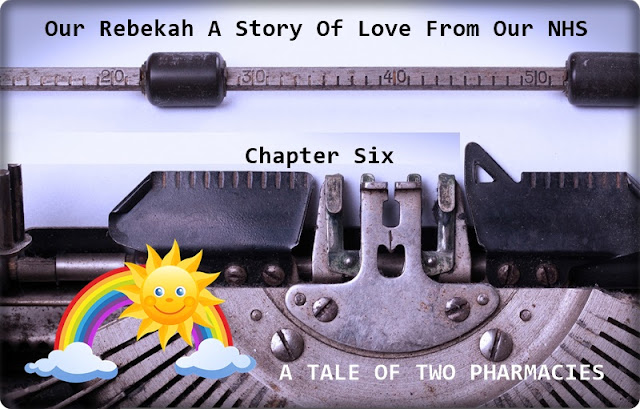 In telling Rebekah's biography and through it celebrating the love of our National Health service I do not to forget the work of the dispensing chemists and the behind the scenes work of scientists in the drug industry.

As a small child there was a family friend, Doctor Clark. Before becoming a doctor he had been a pharmacist. How old would I have been ? Perhaps ten, no not quite that old. I decided I wanted to take inspiration from Doctor Clark and become a dispensing chemist. Well I did have my kinds chemistry set didn't I ? No, I did not follow that career path.

Think about it, being a dispensing chemist must be a thoroughly boring job. I mean all you do is take bits of paper issued by the doctor, take the medicine off the shelf, put it in a bag and hand it over to the patient. Hardly exciting is it ? Yet to take on this responsibility you need years of training and need to be a clever person, I was not clever enough to have followed the example of Doctor Clark our family friend.

Without the pharmacist no doctor can operate, no patient can be treated, no life can be saved. If you apply that to the work of a dispensing chemist then routine and boring is the last thing it can be. There is far more to the role of a dispensing chemist than taking bits of paper issued by the doctor, take the medicine off the shelf, put it in a bag and hand it over to the patient.

I would like to tell you the tale of the two pharmacists in Rebekah's early life, P and I Smith of Whaddon Way near our home and the basement pharmacy at Guys Hospital. I will begin with the later.

All of Rebekah's test results from the clinic and supporting medication were recorded in a small green notebook, I knew everything by heart. While I was not clever enough myself to be a chemist I knew precisely what every drug was and what its job within her treatment was. I could even spell correctly the individual drugs. When a new drug was added to this I dreaded it happening ! A new drug meant the first issuing of the medication had to be collected from the basement pharmacy.

How many patients were there in Guys Hospital ? In the 1980's and early 1990's I do not have a clue. A quick Google search says there are today four hundred. I am sure that is not accurate, can't be. That basement pharmacy had to serve every medication prescribed to every patient in every bed as well as to those who were issued prescriptions from the many different out patients clinics. The task faced every day, yes operation was full on every day of the week, must have been phenomenal. The responsibility would have been enormous. To get the dose or medication wrong would have disastrous results.

Reflecting back as I write this chapter is easy, easy to understand what was happening and why it took so long to be handed the medication but back then patience among patients was not common. Having driven to London, attended the clinic all Beck and I wanted to do was to go to McDonald's and head home, spending more than an hour waiting in that gloomy basement pharmacy was not something either of us wanted to endure.

If only I could wind the clock back I would stand up in the basement pharmacy and shout at the top of my voice what a wonderful staff there were doing. Without their skills, dedication and love there would be no role for any doctor or nurse in Guys Hospital, patients could forget about being ill for there is nothing anyone could do to care for them.

P & I Smith Chemists as been where it is on Whaddon Way Milton Keynes for as long as I can remember. It was run in Rebekah's day as it is today by Mr Patel. Getting a repeat prescription from this shop was as easy as it was hard getting the original from Guys Hospital. Every day many, many people go to collect routine prescriptions from P & I Smith, all those years ago Beck depended on its services. But for Mr Patel and his team their work could never be routine. Without P & I Smith serving its local community our loving doctor's surgery could not operate. Did we take P & I Smith for grated ? Yes we did. Do patients today take P & I Smith for granted ? I am sure they do.

Each Christmas Rebekah used to send a card to Mr Patel and P & I Smith. As I write Rebekah's biography and celebrate out amazing, incredible, loving NHS I want to explain what a vital role our pharmacies have within the NHS. They too do not treat patients, they care for them.