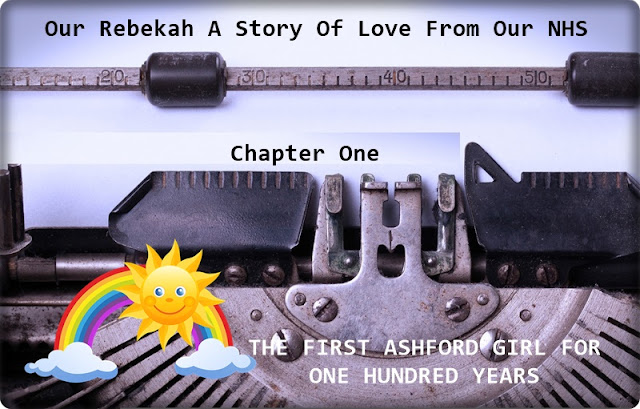 In a perfect world, if such could ever exist, Maureen and I would have elected to have three children, two sons and then a daughter. That for us would be the ideal family. We were married in October 1978. What a different world it was in 1978, among the differences was the fact that doctors could not tell the sex of a child before it was actually born.

My Family, The Ashford Family, does not have girls. A perfect family of two sons followed by a daughter was not going to happen. My grandmother, the family matriarch, was born in January 1890. She had three sons but with the early death of her husband never the daughter she longed for. Her oldest son, Billy, was killed when his Lancaster Bomber was blown up during a raid over Germany in March 1945. Her second son, my Dad, had two sons, myself and my brother. Her third son also had two sons. Nan was not destined to have a granddaughter.

When Maureen was expecting our first child Nan hoped she was going to see great-granddaughter but we all knew it was going to be a boy. Ashford only have boys. The due date was 7th September 1980 but what is a due date ? In 1980 Milton Keynes did not have a hospital of its own but it did have a small maternity unit, when the new baby stated to say it was ready to enter the world it was to this maternity unit I took Maureen. We drove in our car, a white Austin Maxi, which I left in the car park. Twenty hours later the car was where I had left it and the baby had not been born.

Our family GP, Doctor Labrum, came into the maternity unit to see what was happening. That would have been some time on Sunday 14th September 1980. Doctor Labrum decided a more expert delivery team was needed to Maureen was to be taken by ambulance to The Royal Buckinghamshire Hospital in Aylesbury.

I remember clearly one of the ambulance medics saying to me: “Is this your first ?”

I replied quite clearly, “Yes, and our last !”

After a twenty-four hour labour Peter David Andrew Ashford was born. He was a beautiful baby, handsome and smiling. Peter weighed in a six pounds six ounces. We won The Battle of Waterloo so I do not do metric measurements but for those of you who do I will translate proper wight into metric as 2.8916514 kilograms. Obviously proper measurements are better than metric. I'll leave it there shall I.

My car was at Whalley Drive Maternity Hospital in Bletchley, I was at the Royal Buckinghamshire Hospital in Aylesbury. It was a long walk, forget public transport as this did not exist within Milton Keynes in 1980 and if it did Aylesbury was not on its horizon. Maureen's Mum and Dad had a shop on Woburn Sands High Street but Sunday was their day off, during the day I had been trying my best to keep them in contact with the pending arrival of their grandchild. They came to meet Peter, say hello to new mum Maureen and give me a lift home.

September was the start of the new school year, I had not long been appointed Head of Year at Leon School which was then under the headmastership of Mr D B Bradshaw. As a headmaster he was muddled but as a man hew was very kind and supportive. He was, however, unpredictable. He was not good with staff absence, part of his muddles system was for all staff who had been off sick to report immediately to him before taking up their duties. On Monday 15th September 1980 I went into work to tell my colleagues of Peter' Birth. I was in the staff room when Mr Bradshaw walked in. I nervously explained that I had come into work to tell people the news, I wasn't intending to say.

Peter was a handsome baby and very clever. He was crawling at three months and walking at ten months. He was getting ready for his new baby brother. Peter did not sleep, three hours at a stretch was his norm, a sign of his being clever or a sign he wanted a brother to play with.

It was going to be a brother, Maureen was certain we were going to have a son. We did not have names for a girl, Maureen would always talk about when Matthew is born. His due date was 17th October 1981.

Having been in labour for twenty-four hours Maureen elected not to attend Whalley Drive but was booked into The Royal Buckinghamshire Hospital in Aylesbury. As Matthew announced he would soon be joining us we again anticipated a time line of 24 hours. We took Peter to Maureen's Mum to look after, we sat around killing time, I decided to go to the building society to get a bit more cash, fill the car with petrol and generally wait.

“I need to get to hospital NOW !” Maureen suddenly insisted.

An ambulance with blue lights and sirens could generally make along the country roads between Bletchley and Aylesbury in twenty minutes, our Austin Maxi was going to take more than half an hour. Maureen alternated between: “Drive faster !” and “Slow down you keep bumping me here in the back !”

Puling into the hospital car park I tried to help Maureen out of the car, a staff member seeing us raced inside and came out with a wheel chair. Five minutes later Matthew Benjamin John Ashford was born. Matthew was early, all his life he has been a great timekeeper, always early, the concept of being late is not within his understanding.

Matthew weighed in at six pounds seven ounces, an ounce heavier than Peter. For those who lost The Battle of Waterloo that is 2.92000088 kilograms. Peter walked at ten months, Matthew walked at nine months. They taught each other to speak.

Peter was in hospital for a week before he and Mum were sent home, Matthew and Mum came home on day three. As I have explained, Peter was not given to sleeping. Ahead of him coming with me in the Austin Maxi to meet his new brother and bring him home I pushed him into his cot and stuck a bottle of baby milk in hos mouth. He did not drink the milk but encouraged it to leak onto his pillow. He lay in the milk and developed a red rash all over his face.

Oh no ! The hospital would never allow a new baby home with a brother who had some terrible illness and such a rash. I panicked then realised what had happened. Phew !

When both of our boys came home, Matthew in October 1981 and Peter thirteen months earlier, our GP Doctor Labrum visited our home to make sure all were well. When Doctor Labrum called it was a medical professional visit, of course it was, but it was also a friend dropping in to say hello and see the new arrival.

So within our ideal family Maureen and I had our two sons, Ashfords do not do daughters so the ideal would never be completed. Between Peter and Matthew my brother and his wife had a son so my Nan had three great-grandchildren, all boys. She would never see a great-granddaughter.

As I have said, my Nan was born in January 1890. At the outbreak of World War One she became a munitions worker in Birmingham and was billeted on a family who owned a small nail making business in Aston. Their son, William Ashford, was also born in 1890. He was in France fighting in the trenches. William had an older sister Jessica who was the last Ashford girl to have been born. Three sons, four grandsons, now three great-grandsons Nan was not destined to see an Ashford Girl, almost one hundred years and the Ashford Family had not produced a girl.

As 1983 dawned Nan celebrated her ninety-third birthday in January another Ashford baby was on the way and it was sure to be another boy. Maureen and I had names ready for a baby girl but knew it was going to be a boy. We debated long and hard over the name for a boy, I wanted Mark but with Matthew already with us we though people would jokingly ask where Luke and John were !

The very early part of Milton Keynes Hospital had been opened but with out two sons having been born in The Royal Buckinghamshire Hospital in Aylesbury that was where son number three would enter the world. Twenty-four hours labour for Peter and Matthew emulating a formula one racing car we tried to be prepared. The boys were taken to Maureen's Mum to look after, Granddad was running his hardware shop in Woburn Sands. Maureen and I then made a slow and gentle drive in the Austin Maxi to Aylesbury.

Medical science still could not tell in advance of a birth what sex a baby was born so it was always referred to as the baby. “The baby isn't going to be born for some time yet,” I was told. “The best thing you can do is to go home and we will tell you when to come back. Maureen was admitted to the hospital and I pointed the Austin Maxi back towards Bletchley.

We had a BT Trimphone, state of the art and fashion in 1983. It screeched out its unique tone. Royal Buckinghamshire Hospital was calling. “Your baby will be born in about half an hour if you would like to come down.”

“But I will have to take my boys to their grandparents to look after and they will have to shut their shop first.” Even if I could have driven immediately to Aylesbury I could not possibly be there in half an hour. I had been present at the birth of Peter and of Matthew, I was going miss the birth of Mark.

“Take your time, get here when you can,” I was told.

When I walked into the ward of The Royal Buckinghamshire Hospital Maureen was sitting up in bed with baby number three.

I went down to the reception area of the hospital where there was a phonebox. I called my Nan and said, “When are you coming to meet your great-granddaughter?”

Here's a picture of Nan the first time she met Rebekah, Rebekah the first Ashford girl to be born for one hundred years. 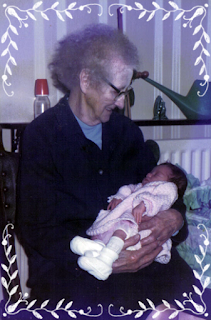 Nan later told me that when she put the phone down she cried. My Nan cry ? She lived through two world wars, she was widowed at an early age left with three young sons to bring up, her oldest son was killed shortly before the end of World War Two. My Nan cry ? She never cried. She did cry on 20th February 1983 the day Rebekah Louise Maureen Ashford was born, the first Ashford Girl for one hundred years.