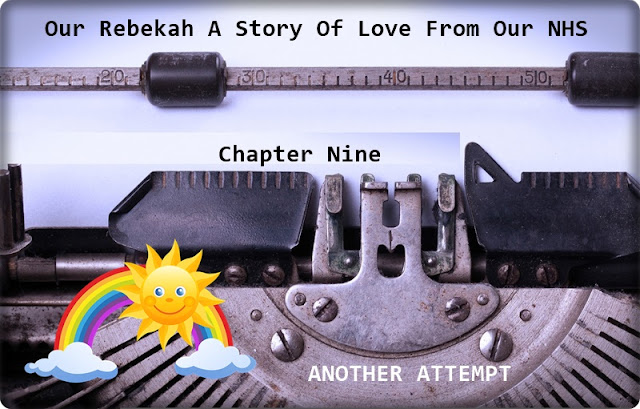 Once Rebekah was well enough after the failed transplant we went back on call for another attempt. By this time I had paid BT to put an extension in the bedroom but the call did not come during the night when we were all asleep in bed. The call did not come quickly as it had first time round, we waited several weeks. I am not sure if the call came on a Saturday or Sunday afternoon but it was at the week-end. I had not kept the car topped up with petrol so that was the first thing ton do before anything else. Strange how some things stick in the memory while others fade but I so clearly remember pulling into the petrol station.

Rebekah and her doll Chell went down to meet Geoff Koffman and his team in the operating theatre while Maureen and I waited outside. This time the life-saving transplant almost felt routine.

One thing I do not remember is what happened to Maureen once beck was upstairs in the small side room of Dickens Ward in Guys Tower. It was I who spent that first night sleeping on the floor by the side of Rebekah's bed.

Do you know who Sting is ? He was the principal songwriter, lead singer, and bassist for the new wave rock band the Police from 1977 to 1984, and launched a solo career in 1985. Shortly after Rebekah was moved to the main area of Dickens Ward he turned up to visit the children. What lovely thing to have done. Thank you Sting. By the way I love your music.

I am going to talk about this in a later chapter but let me tell you here that meals for patients in Milton Keynes Hospital are among the finest anywhere. That was not the case at Guys Hospital where without exception they were the most ungastronomic imaginable. But there was a solution. McDonald's opened a branch just outside Guys Tower, Heaven ! For Rebekah and other patients, not to mention their parents, McDonald's became the standard menu. The company must have made a fortune. I wonder if such enthusiasm would have abounded had that which I am about to share with you been common knowledge.

The new McDonald's was built on a former vacant plot of land within the hospital campus. I am guessing it must have been vacant for a long time. I am talking around the late 1980's. The Great Plague of London was 1665/1666 and this vacant plot was a plague pit ! Those preparing the site started finding bodies. Very quickly boarding was put up to hide the pit while skeletons were removed to be reburied. McDonald's boasted this new branch was the first anywhere to be built within a hospital, the company never said a word about it being the first branch to be located at a former plague pit !

Guys Hospital opened in 1721. It was founded by Thomas Guy. He was a book seller and a bit of a financial speculator. There was a quiet area and garden within the busy hospital where his statue could be found. I would often sit there in the quiet. At the far side of the hospital complex can be found Southwark Cathedral. With construction starting in 1839 the hospital predates it by more than a century. Maureen and Rebekah would often walk to sit in the cathedral grounds where by chance they met Reverend Robinson. He was a special man who showed much love to Rebekah, when she was at home and not in hospital they exchanged letters. Southwark Cathedral and Reverend Robinson, however came after the time in Beck's story I am here relating. Following her second transplant she was never well enough to leave her bed on the ward.

Just as it had on the occasion of the first transplant everything failed on Day Thirteen. Beck, Chell and Geoff Koffman went back into theatre to remove the kidney. Again Rebekah's immune system was too strong to accept the addition to her body.

This time I was upset, of course I was, but I accepted it as fate. My daughter's life was not going to be saved by way of a kidney transplant but her life would be saved.

Fight Bekah, fight. That was something we used to instil into Beck, she may have lost her second transplant but she was still fighting. Also fighting was the NHS and all within it, fighting with every weapon of love it could think of to care for my darling daughter.

Posted by The Sunshine Smile Crew at 01:10