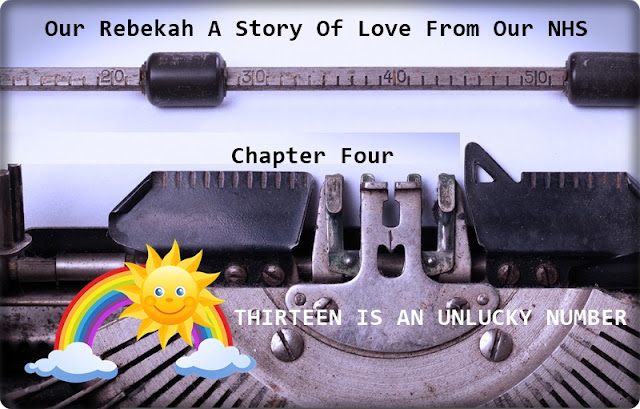 So with everything carefully put in place Rebekah went on call for a donor kidney.

The transplant surgeon was Geoff Koffman, one of the country's top surgeons and a shining light within the National Health Service. But for all his standing he was very down to earth, to everyone, medical staff. Parents and children he was Geoff. So many people owe their lives to his loving skill. Geoff prepared us for all that would be involved. There was a little patents room attached to Dickens Ward on the ninth floor of Guys Hospital Tower, that was where special consultations took place and that was where Geoff prepared us all for Rebekah to receive a transplant.

I could drive from home to Guys Hospital in around ninety minutes, the call when it came was likely to be at the end of a day or in the evening so traffic would not be heavy. The donor kidney had to be harvested and brought to Guys Hospital, it could survive outside a body for several hours so getting from home to hospital was not an emergency. There was no need for a fast drive, an ambulance with blue lights was not needed just the family car. There would be time to get Peter and Matthew to grandparents to be looked after. No rush.

There were no such things as mobile phones in those days. At home we had a single BT handset in the hall of our home, no extension and no hands free units. The home phone would the primary method by which the hospital would contact us when a donor organ became available. As a back up we were given a small black box, a bleeper. A signal and short text message could be sent to the bleeper if the home phone was not answered.

Each night as we went to bed I would stretch the cord of the BT Trimphone so it rested at the bottom of the stairs. I would prop open the bedroom door so the phone ringing would wake me up. Rebekah had been on call for less than a week when the phone rang. A hospital bag had already been packed. Everyone in the car, the boys went to stay with Nan and Granddad then Maureen, Rebakah and I drove excitedly to London for the life-changing operation.

Chell went down to the operating theatre with Rebekah to assist transplant surgeon Geoff Koffman and his team. I do not remember how long the operation took, an hour perhaps ninety minutes, as soon as Beck was in the recovery room Maureen and I were allowed to join her. As the aesthetic wore off she was taken from the basement operating theatre to Dickens Ward on the ninth floor and into a small private room within the ward.

Even back then the technology was amazing. Each leg of the bed stood on a scale carefully measuring the total weight of the bed. Rebekah was a tiny part of the sum but a computer was so accurately keeping track of her weight. Fluid intake was being carefully measured as was output. Her heart function, breathing and temperature were constantly being monitored. A nurse was on duty and never left her side. Doctors checked on Beck several times an hour.

Do you remember from an earlier chapter how I explained creatinine levels in the blood give an indication of kidney function ? This was extra specially monitored to see if the new kidney was functioning as it should.

You and I have two kidneys located in the small of the back on the left and on the right hand side of our bodies. We can actually function with one kidney, two is a bit of a luxury. When a patient receives a transplant the two failing organs are not removed, the transplanted kidney is located in the lower abdomen. Geoff Koffman explained he had connected the blood supply direct to the heart to give the kidney a better chance of working. I did not understand.

Maureen stayed in London at Guys Hospital with Rebekah, I returned home to look after Peter and Matthew. There was no parent accommodation at the hospital, Maureen had to sleep on the floor by the side of Rebekah's bed. At home lovely Doctor Karia spoke with me and explained what transplant surgeon Geoff Koffman had done. He traced his finger over my chest to explain where everything was placed. Years later I can feel loving finger moving over my body. Does that sound silly ? Honestly, as I write these words I can feel his fingers and can hear his words.

Back in the ward there was another family with a little girl of similar age to Beck. A friendship between us all developed.

Rebekah was a strong willed person, even as a child. With a body not properly functioning, never having properly functioned all her life she was still strong. He body was not taking kindly to the alien kidney. Anti-rejection medication was slowing things but not stopping them. Doctors did all they could but they could not slow the rate of rejection. It was inevitable the transplant was going to fail. On Day Thirteen Rebekah and Chell went back down to the operating theatre where Geoff Koffman removed the donor organ.

I was gutted. Rebekah was strong, stronger than I. There was enough function left in her own kidneys for her to recover, return home and await another attempt at a transplant. Shortly after Rebekah came home the little girl who had been her friend on the ward died. Beck took a photograph of the two over them, over the top of the deceased child she wrote died. Over herself she wrote liver – yes she spelt it like that liver.