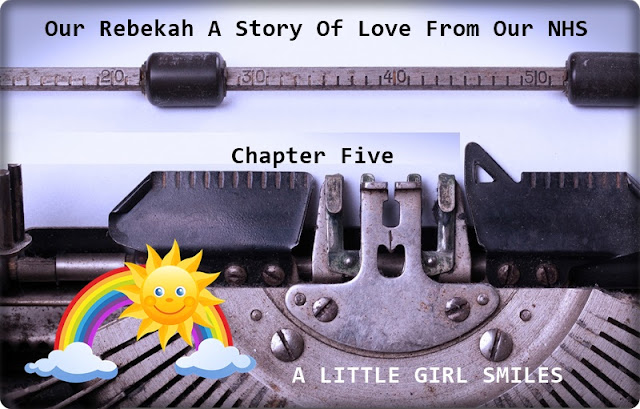 It was not just in later years that Rebekah was known as Little Miss Sunshine. In this chapter of her biography let me share some of her smiles, as I do can I remind our readers that these smiles were transplanted by the love and care she received from the doctors and nurses who loved her through what could have been a difficult childhood. Because of the care she received Beck had a very happy childhood.

The day of the self haircut: Beck gave me a smile the day she decided to cut her hair. Sneaking a pair of scissors out into the garden she trimmed her fringe giving it more ups and downs than any mountain range in the world. Maureen was not impressed but I thought it was funny. Thanks beck for the smile.

Some up some down: Rebekah's normal style of hair was what she called some up, some down. This consisted in her hair being combed down round the back of her head. Then some hair would be pulled and tied into a ponytail to hang over the back of the already styled

Tuppence: When Rebekah said she wanted to go horse riding I agreed but with one strict condition, we were not going to have a horse of our own ! Beck used to go every Saturday to a youth group by the name of Interaction at Peartree Bridge in Milton Keynes. She was very small for her age, the only horse suitable for her to ride was a small pony known as Tuppence. Beck didn't really take to horse riding, gave up after a few weeks and no we did not ever own a horse !

The hockey game: Now this is something I remember well. Beck was quite young, perhaps seven or eight. She was in the school hockey team playing against another school. I was standing with some other parents. There was a young boy also watching. He pointed Rebekah out, I can clearly visualise her now hockey stick in hand and giving it all. See her, she could die you know and look how hard she is playing. The lad said.

Guys Hospital School: Attending the renal clinic at Guys Hospital we would book in, Beck would be weighed and her height checked. A urine sample was then taken and sent to the lab. While waiting there were nursery teachers from Guys Hospital's in house school who kept the waiting children occupied with educational games. It was important for Beck to be putting on weight and to be growing in height. Geraldine the sister who ran the clinic would stretch Beck to be as tall as possible. I also used to cheat. Before the clinic we would both go to London Bridge Station where there was an amazing patisserie. I used to stuff Beck with two or three cheese croissants and as many cans of Coca Cola as her bladder could hold. If I could get away with it I would push things in her pockets to increase her weight. But back to Guys Hospital School. It was during the clinic visits and the activities of this school that Rebekah decided she wanted, when she grew up, to be a nursery school teacher. Indeed that is what she became.

Eeyore: When Matthew was a baby his favourite teddy bear was Winnie The Pooh. Telling stories from Christopher Robin Peter's adopted character was Piglet. Maureen sewed a Piglet toy for Peter. Rebekah chose Eeyore, the grumpy donkey. Her character could not have been more different to Eeyore but she loved this Disney character. In later life her e-mail address was eeyoretiny@gmail.com

Have passport will travel: I know that many of my former students from Leon School will read this biography, indeed some of you have contributed to the writing. I am now going to let you into a secret. Do you remember all those school trips I used to organise ?

The termly visits to Alton Towers ? How about the Disneyland Paris Flyers ? Never fewer than four coach loads would depart school on Friday, drive overnight to Paris where we all spent the day in Disneyland. Then over night back to Milton Keynes to crash out at home and back to school on Monday.

We went to Holland, to Italy and to Germany. We went to Egypt and of course we went to America.

You former students of mine, I call you my Leonites, will be thinking I organised all these exciting adventures for you. I suppose in a way I did but selfishly I planned things for Peter, Matthew and Rebekah. You guys and gals tagged on.

For Rebekah to travel to America we had to get special medical permission. I remember Doctor Susan Rigden saying It may well do her good. It did. On returning from three weeks in California, Nevada and Arizona her kidney function had improved. We went to the Giant Redwoods, Yosemite, San Franciso, panned for gold at Sutters Fort, flew down the Grand Canyon, nipped into Mexico at Tijuana, played the one armed bandits in Las Vegas and chilled out on Malibu Beach. Oh yes we went to Disneyland, the real one in Los Angeles and went to Great Universal Studios. We cruised Hollywood Boulevard and checked out The Walk of Fame.

Thank you for making a little girl smile.

Posted by The Sunshine Smile Crew at 01:07