That The Week That Was 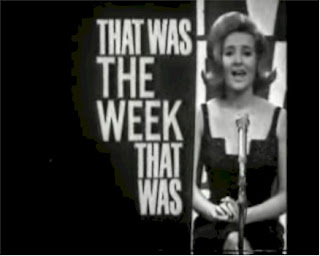 That Was The Week That Was - who remembers that TV show ?

Really ?  I was only 12 years old when it appeared in The Radio Times and I am The Geriatric DJ so you must be getting on a bit !
But seriously - LAST WEEK - what an amazing week that was for members of The Sunshine Smile Crew.

I broadcast the radio show START THE WEEK with every track dedicated to and applauding the work on Milton Keynes Winter Night Shelter. I love playing music on the radio but this was an extra special show.

Then, as part of Worektree, I spent time at Leon School working with sixth form students. I thought I was going there to inspire the teenagers but OMG they INSPIRED ME - big time. In the picture above on the left is LEONITE Paul.

With one exception for me Tuesday was a bit boring and an anti-climax after Monday.  I spent much of the day at the computer, rattling keys and trying not to fall asleep !  Sleepy Joe or should that be Sleepy Geriatric DJ ? But...but...but !  I went to pick up some stuff for Saturday from LEONITE Stuart. GREAT to see him after so many years.

I broadcast my radio show WAKE UP WITH THE CLASSICS - people think of me as a retro-pop man but honestly my favourite genre of music is Classical.

I then spent time chatting with Rosemary, a member of Bletchley & Fenny Stratford Town Council. I am hoping we will be working together in the near future on something for our community.  Rosemary donated some absolutely amazing STUFF for Saturday's event. THANK YOU ROSEMARY.

Rosemary ran the recent Canal Festival where we recorded this.

Thursday I was getting MEGA nervous about Saturday's event for Milton Keynes Winter Night Shelter. No that was not thunder you could hear, it was my knees knocking !

LEONITE Rachel and her husband David came round with STUFF for Saturday. They could hardly get into my front room for bags and bags of stuff.

I went to Milton Keynes Irish Centre to speak with LEONITE Manager Paula - a lovely lady who so kindly stepped up with an important piece of practical help for Saturday. Paula you know I am a Daniel O'Donnel fan - this is for you.

Friday 13th wasn't it !  Broadcasting my radio show PICK OF THE POPS I fluffed the introduction then was cursed throughout the two hours by the dark angel of Friday 13th !

As every minute of the day passed I became more and more scared about Friday's event. How would I ever face people if the dark angel of Friday 13th 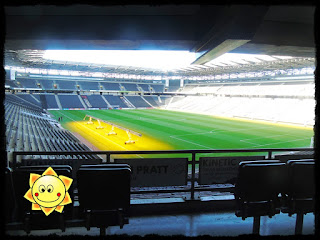 In the afternoon I went to Stadium MK for a tour of the MK Dons operation. As a Sheffield Wednesday man I could not help comparing everything I saw with Hillsborough. My opening comment was the dressing room was spartan ! 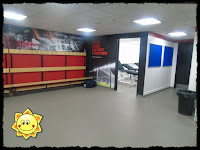 Well have a look !  What do you think ?  Not what I have seen at Hillsborough.


But as the tour progressed I became more and more aware of what a loving community centred operation Stadium MK is.  I will chat about that on Monday's show. While I was touring Stadium MK I received a text from Sunshine Smile Crew member Jewels offing to help on Saturday. AWESOME.

Kev from Radio CRMK sent me the draft of an article he had written about me for Phonebox Magazine. Oh Kev - you are so kind. THANK YOU.

Saturday started off in an unusual way. I am always up awake and about before the alarm goes off. I woke up with it banging away in my ears.  I picked Jewels up at 4.20am and by 4.30am we were setting up the stall for our Milton Keynes Winter Night Shelter Event at the Irish Centre. By 5.30am people were wading through the stuff 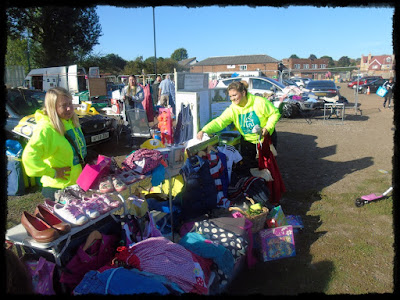 in the dark. By dawn we had met the target I set for the money we wanted to make. By 7.30am we had taken £250 and when Jewels and i went home 8 hours after we arrived at Milton Keynes Irish Centre we had taken more than £400 !

To think that I had been worrying myself silly all week that the event would be a failure ! 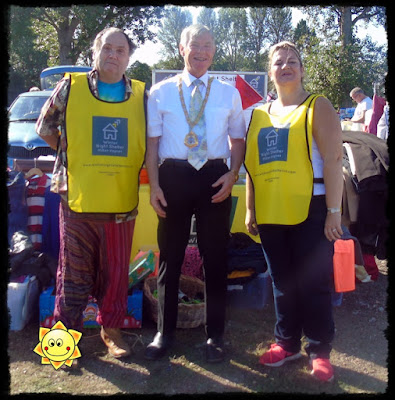 We gave up my idea that everything was free in return for a donation - we were so busy we just could not have coped with that - instead we ran a traditional car boot stall.

Traditional but we were swamped with love from the people there and were able to significantly raise awareness of the work done by Milton Keynes Winter Night Shelter.

There was good interest in my CRYPTIC MUSIC QUIZ. The answers are now on line at:
http://www.geriatricdj.com/howwelldoyouknowyourmusic.htm
First question in the quiz: DUKE OF WHERE ? DARTS HAS THE ANSWER......
Here it is.....

What a fabulous day Saturday was. THANK YOU EVERYONE. Thank you to our lovely Mayor Sam for your 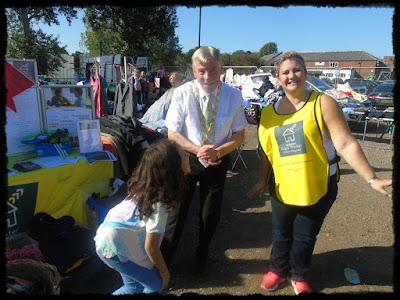 support. As I was walking him back to his car he said to me: So David what's the next thing you are going to involve me. Mr Mayor - WATCH THIS SPACE.

To think I was scared silly all week about the event !  It could not have gone better.

Another question from the quiz. What is the flight number Ebony Eyes boarded ?  Here's the answer.

Returning home from all that had happened at Saturday's event there was a parcel the postman had brought. It

contained HEARTS OF LOVE LEONITE Maggie had made for The Sunshine Smile Crew to use in our hospital. Surely there can not be another school anywhere in the world that can match the love we had in Leon School during the 1970's and 1980's.

What about today ?  My head has been buzzing all day, 4.02am right now and I've been working at the PC for about half an hour.  I'll finish this blog then I'll go back to bed.

12noon today Sheffield Wednesday kick off away to 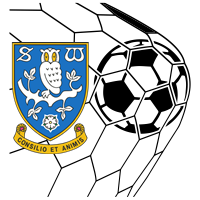 Huddersfield Town. Boys you had better win or else I will speak to Mr Chansari and have him install a dressing room like the one at Stadium MK !

Which football team do you support ?

CLICK HERE and have a look at my Sheffield Wednesday project then do something similar for your club even if it is West Ham !

Top of the agenda is to find many, many more members for 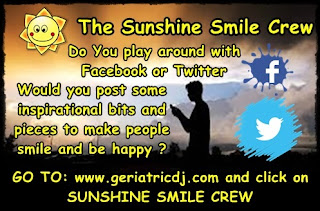 our on-line SUNSHINE SMILE CREW where every single member is tasked with making at least one person smile every day.

Watch out 'cos The Geriatric DJ will soon be coming after you !
Let me go through the diary for the coming week then you can bring your love and your smiles to all that is happening.

6am to 8am www.crmk.co.uk I will be broadcasting my first radio show of the week START THE WEEK - got some fab music to play and a lot to talk about. That will be followed by mountains of catch up stuff from Saturday. Do join me on the show - if you are a Sleepy Joe then the PODCAST will be on-line by 9am.

Here's something from Monday's playlist:
Some time on Monday I will pop into the offices of Bletchley and Fenny Stratford Town Council to chat about a few things we have coming up.

Tuesday I am launching a brand new radio show - 6am to 8am www.crmk.co.uk TERRIFIC TUNES. To launch the show I am going to feature something I did a while back. I researched every number one hit on the day of my birthdays. As I play a selection on Tuesday I hope I can inspire some of my listeners to have a bit of fun doing the same.

This was number one on my 19th birthday.
Half a million people at Woodstock - not a single fight - not a 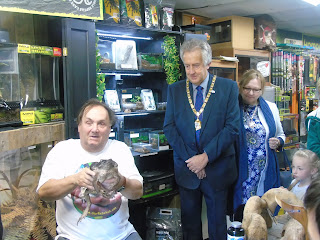 single incident other than LOVE. That was FIFTY years ago yet when I was at Leon School last week a 16 year old lad talked to me about Woodstock !

The second week of this show will be brought to you by former Mayor of Milton Keynes David Hopkins, his playlist is SONGS OF LOVE. The picture above was taken at my Frog Challenge two years ago.

Wednesday starts with my broadcasting WAKE UP WITH THE CLASSICS. Want to hear something from that play list ? OK - here you go.

5pm on Wednesday it's the AGM for members of University Hospital Milton Keynes.

I am working on a project which I am calling TeenHeroMK. I want to inspire teenagers to become blood donors once they reach their 17th birthday and are able to donate. Not that this is up for discussion at the meeting I really do need to get my draft ideas sorted before I see Hospital Board Chairman Simon at the meeting.

I can not tell you how much I am looking forward to Thursday. I am launching another brand new show show on Radio CRMK 6am to 8am - DAVE'S DISCO. 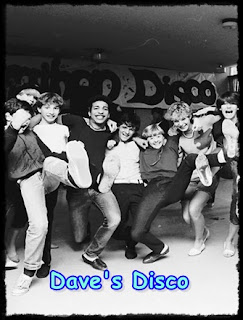 Those amazing teenagers at Leon School last week could not believe me when I talked about Leon Disco which has now become something of a legend in Milton Keynes. LEON DISCO is coming back on the radio. LEONITES remember to ask me to play a dedication for you.

Normally I sit down in an incredibly comfortable chair when I broadcast my radio shows. NOT WITH DAVE'S DISCO - I will up up and dancing to the music. I also plan to flood the studio with disco lights.

This is the very first song on the playlist. Couldn't be anything else could it ?
Once the show is over I am driving up to Tamworth to visit my 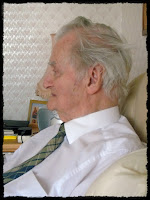 Mum and Dad who are celebrating their SEVENTY-FIRST birthday. 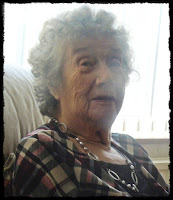 Dad has written his autobiography and given me a copy to read and help him with. I have to read and work on that before seeing him on Thursday.

Last year I broadcast a special show for Mum and Dad. This was the number one hit on the day they were married.

Friday's radio show, of course, is PICK OF THE POPS. 6am to 8am www.crmk.co.uk  This week the time machine is going back to 20th September in the year of 1977. Get your OLD GREY WHISTLE TEST ready. What am I talking about ?  Listen to the show and all will be clear.

I am not telling where it was in the chart but I will be playing this.
After the show I am going to the YMCA where I will be joining Worktree supporting homeless people into employment as they rebuild their lives. 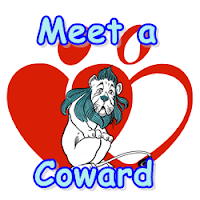 Don't think me weird but on Saturday I am going to tour behind the scenes at Milton Crematorium - yes including the furnace bit.  This really is a special place in our town. In my family we always run funerals ourselves and funerals are happy, party times celebrating the life of the person concerned. If you are looking for love in Milton Keynes you will find it within the staff who run Milton Keynes Crematorium.

When it comes to my time this will be read at my funeral.
PLEASE make sure you listen to that video.

Two things from it: YOU ARE A CHILD OF THE UNIVERSE NO LESS THAN THE TREES AND THE STARS YOU HAVE A RIGHT TO BE HERE....
and: WITH ALL ITS SHAM DRUDGERY AND BROKEN DREAMS THIS IS STILL A BEAUTIFUL WORLD - STRIVE TO BE HAPPY. 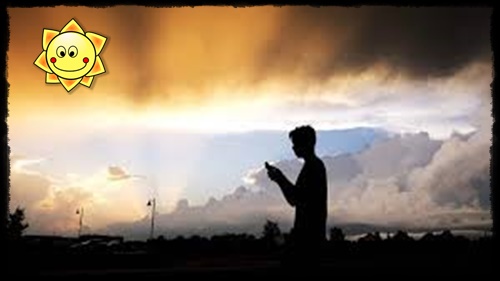 So.......how many people will join THE SUNSHINE SMILE CREW and join with me to make hundred and hundreds of people smile this coming week.

Posted by The Sunshine Smile Crew at 21:22