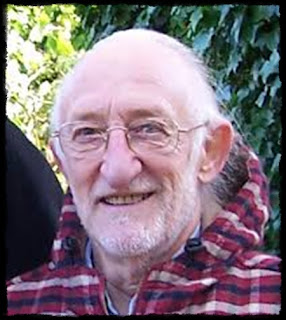 In the early days of Milton Keynes, in the 1970's, lorry driver Brian Billings came from London to work on the building sites of the New City.

It was far, far more than houses Brian, better known as Bill, had a hand in building. In 1980 his work was recognised with an honory degree from The Open University, itself a Milton Keynes icon and landmark. In 2000 he was awarded an MBE by HM Queen Elizabeth II. Sadly Bill left us on Boxing Day 2007 but Bill's work is a legend and will remain so for decades to come. Milton Keynes would not be Milton Keynes without Bill Billings.

Bill was NOT THE CONCRETE COWS, not the originals anyway. These were three cows and three calves built by artist Liz Leyh in 1978.  It was The BBC's DJ and presenter Noel Edmunds who made the cows famous. He was for ever making jokes saying how Milton Keynes was closing farms to build houses and factories so throwing out the real cows but replacing them with concrete cows to match the concrete houses !

Too fragile now to be left in the open those original cows are in a museum, their replacement are the work of Bill Billings. 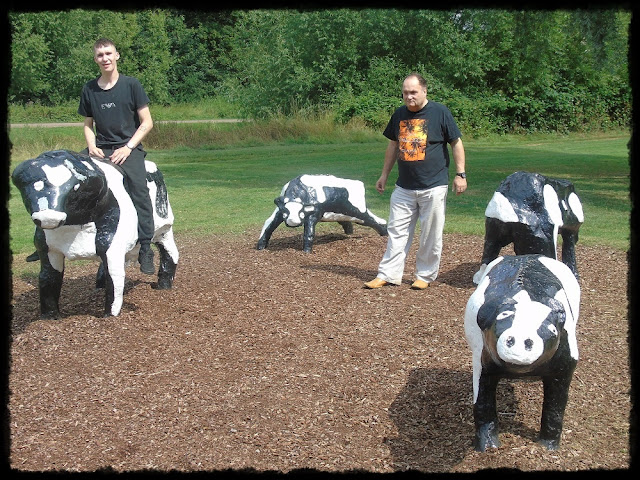 We went in search of these new concrete cows and found them in a beautiful setting next to the A422 (Monks Way) between V5 Great Monks Street. and V6 Grafton Street.) 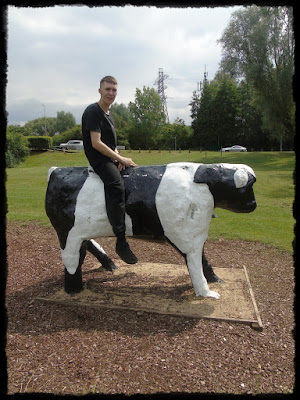 Yes, the setting is beautiful and well maintained but nowhere was there a plaque or a notice explaining who the cows are, who their artist is and their significance to Milton Keynes. There is a danger they could become a forgotten landmark of Milton Keynes. 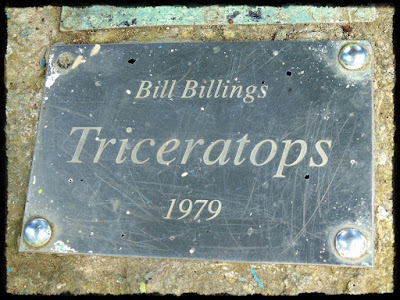 In no way a forgotten landmark is The Peartree Bridge Dinosaur built by Bill was back in 1979. 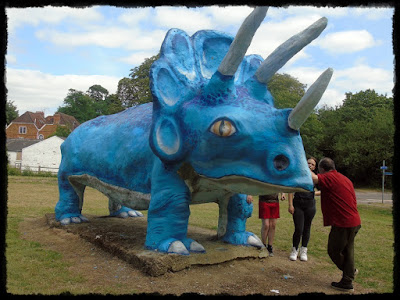 Josh remembers as a child climbing on to the back of Bill's dinosaur. Bon Jovi did a photoshoot at Peartree Dinosaur. Taking this photograph we met two lovely teenagers who knew all about Bill Billings and the dinosaur. They also knew about Leonasaurus. 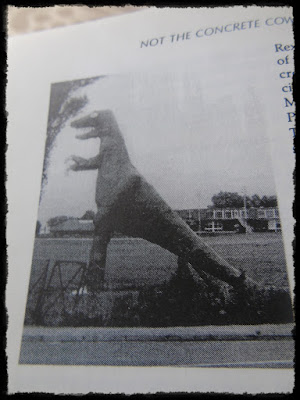 This work of Bill Billings was recorded in David's original book Not The Concrete Cows.............

JURASSIC CLASSIC:
Steven Speilberg - Jurassic Park ? Forget it. Crowds flocking to cinema screens up and down the country, media hype, marketing bandwagons covering everything from tee shirts to birthday cakes. Anyone would think that Mr Speilberg and Universal Studios invented the species. Well the silver screen mogul is very much mistaken, Milton Keynes has had its own Jurassic Classic for years.

Every British Rail passenger travelling up and down the main line through Bletchley could be forgiven for thinking themselves victims of a time warp. Either that or perhaps they wonder if the eight thirty-two out of Euston has taken a wrong turning and ended up in Hollywood California. For there, snarling at all and towering thirty feet above its surroundings is a life size Tyrannosaurus !

But this specimen is, for the most part, friendly and being constructed out of reinforced concrete not likely to terrorise anyone. Living at the bottom of Leon School's playing field this particular dinosaur was built under the direction of local artist Bill Billings. During the spring and summer of 1991 the dug out foundations and erected a steel frame support before casting the beast in concrete.

Although Central Television showed an initial interest in the statue it has entered the landmark scene of Milton Keynes and been taken so much for granted it is anything but forgotten. But T Rex is not the only one of Bill Billings jurassic creations to roam the city. A few miles along Marlborough Street, at Peartree Bridge, is Triceratops again sculptured in concrete and this particular dinosaur came to live in Milton Keynes fifteen years ago.

Standing in the grounds of the Interaction project at The Old Rectory, Peartree Bridge, this dinosaur has been featured in a Bon Jovi video and was, for a time, the subject of the most popular selling post card of Milton Keynes. Unfortunately the trees along the V8 have matured now to the point where the sculpture can no longer be seen from the road. But next time you are in the area turn off towards Waterside and admire this particular landmark.

So Mr Speilberg you may have become a legend in your own time but so, in Milton Keynes, has Bill Billings. Then when your Jurassic Park is consigned to the discount shelves of the video stores then repeated every Boxing Day on our televisions Bill's creations will still be in their youth. And who knows Bill may have another Jurassic Classic in mind to graze on the planes of our city !

The original text from David's 1994 book. Now, all these years later, what are your memories of Leonasaurus Rex ? 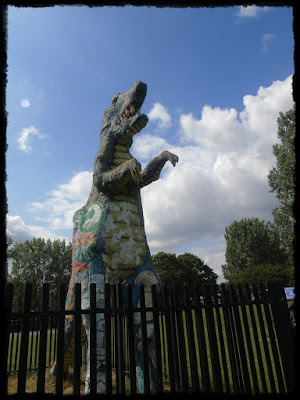 During my time as Head of Year at Leon School I was privileged to serve under two different headmasters: Mr D B Bradshaw and Bruce Abbott, two very different characters but both amazing headmasters. One day Bruce Abbott came into my office and said he wanted an iconic statue building on the school field, something which would raise the profile of the school. He then added: "Dave Ashford I want you to make it happen !"

Abbott's idea was to have a series of Easter Island Head style constructions running the entire length of the school field, all could be seen from passengers on trains heading into Milton Keynes. I thought that was a little ambitious and wanted to build on the developing of the legend surrounding the Peartree Bridge Dinosaur. 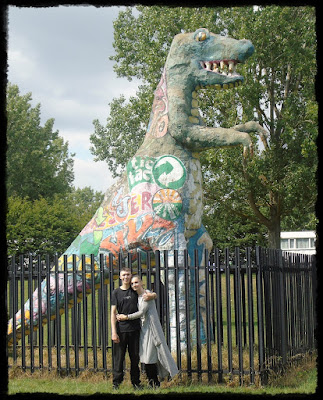 If the dinosaur were built in the bottom corner of the school field it would be clearly visible from the railway and be the first thing passengers saw on their way into the new city.

I had to make a planning application which was easily granted. I was interviewed by Central Television on the site where the dinosaur would stand but sadly the station did not engage as construction began.

Construction was fun, big time and the teenagers were so excited and enthused by Bill. Bill did not so engage with many of my colleagues and certainly not the caretaking team, I was constantly piggy in the middle and peace-maker. However, Headmaster Bruce's Abbott's dream came to fruition as did mine and Leonasaurus became a major Milton Keynes landmark.

Bill did not construct another dinosaur, he went on to many other exciting projects but when Bruce Abbott retired dinosaurs took over the management of Leon School.

When the school decided it wanted to dismantle the statue there was public outcry among residents on the Lakes Estate. Sadly that did not stop the mental dinosaurs from having their way as Leonasaurus was expelled from Leon School to a new home at The Warren Playground. There it proudly stands today, an icon but without its original location no longer a landmark ! 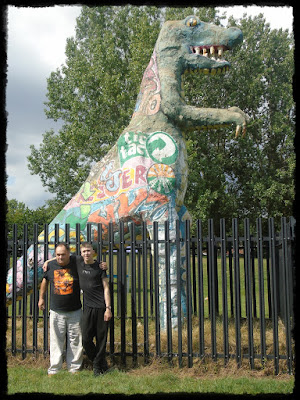 The story does not stop there. Students who were involved in the building of the statue tell me a time capsule was buried at the site. I can not say I have any recollection of this but clearly something happened. I tried to engage the present dinosaur management of the school, what a wonderful thing it would be to find it and see what the capsule contained. Sadly none of my communications with the school received a response.

Posted by The Sunshine Smile Crew at 05:05