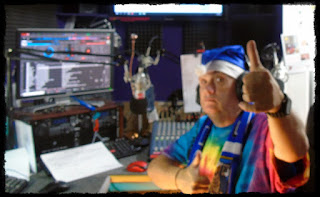 I am still the newbie at Radio CRMK but I get withdrawal symptoms when I do not have a show to broadcast. Starting next week I will be live every day Monday to Thursday 6am to 8am then in in the New Year I will be adding in a Friday show.

I am proud to be a radio DJ but even more proud of the station within which I am a small part !

I am going to play music here on the blog from today's show and to tell you all why Radio CRMK is the greatest radio station in all of the world.

Here's something from ABBA I played earlier.

I walked into the studio just before 5am, it was cold outside so I turned the hearer on. About forty minutes into the show I 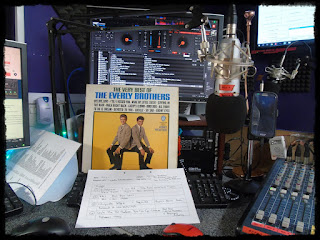 switched it off, the music was hot enough to keep me warm.

Today's show was MUSIC FROM MY VINYL COLLECTION, I have to confess that I play everything using modern digital technology but will ONLY play music if I have the original vinyl copy at home.  Each week I have a featured album, this week it was THE VERY BEST OF THE EVERLY BROTHERS so let's have a track from them.

Yesterday evening I did a guest spot on BBC Three Counties Radio.

It was cool, it was fun but due to morons closing off Dunstable High Street I was obliged to take a VERY long detour home, I went to bed at 11.30pm yet was in the studio to prepare for this morning's show round about 4.50am.

Thanks Producer Jonathan and thanks Presenter Nana at BBC THREE COUNTIES RADIO. Hey Nana could we poach you to join our station ?

This was my opening track this morning. 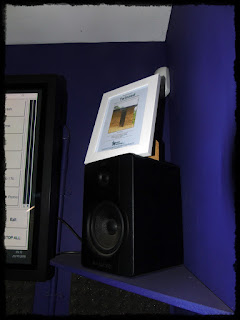 I was a guest on BBC Radio yesterday to talk about our radio station's toilet twinning programme. The Beeb does not do advertising does it ?  It did last night as I plugged Radio CRMK.  Well we are the very best radio station in the world after all !

The best ?  YES. When I took what was a silly little idea to twin our studio look with a home in Uganda and provide the family which did not have a loo, all of our fantastic presenters grabbed hold of the idea and made it happen. 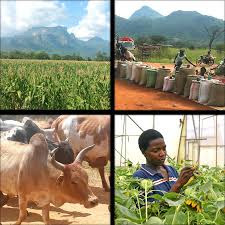 I have put the twinning certificate on top of a studio speaker so everyone can see it. It will eventually end up in our loo.

Radio CRMK's toilet is twinned with and has now provide a loo for a family in the village of Keeru in Muyanje Kabale District of Uganda.

Something about BBC Radio which would not work for me is 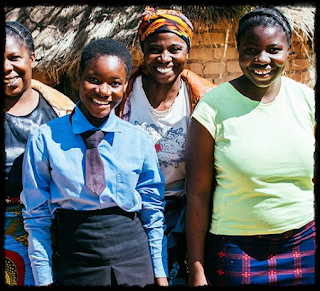 presenters not being able to select their own music, everything comes down from on high. I also like to be able to wing my way through a show.

Having been on two different radio stations in nine hours I winged things and changed the playlist to include a song for another radio station. I played Radio Ga Ga. I played a recording from the Live Aid Concert which had a world-wide audience of one billion.  Almost as many as listen to Radio CRMK. 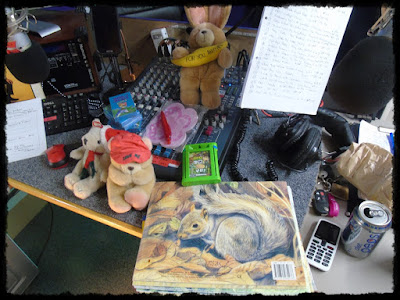 with a child sick in hospital. CLICK HERE to find out about this project of love and to get involved.

I grabbed some of the gifts of love, put them on the broadcast desk to take this pic. 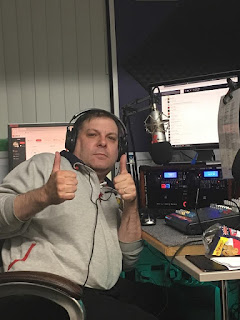 DJ Stewart Bailey holds the Radio CRMK award as PRESENTER OF THE YEAR. A truly well-deserved accolade !  I tuned into his show on Saturday and there he was talking about SECRET SANTA.

Stewart shared a poem with me which I read twice on this morning's show and plan to share it on all of my shows throughout the week.

I play music to make people smile, be happy and to inspire support for good causes. THANK YOU Stewart for this amazing verse.

Smiling is infectious, you can catch it just like flu -
When someone started smiling at me today I started smiling too.
I walked around the corner and someone saw me grin.
When he smiled I realised I had passed it on to him.
I thought about the smile and understood its worth.A single smile like mine could travel round the earth.So if you feel a smile begin do not leave it undetected
Start an epidemic and get the world infected ! 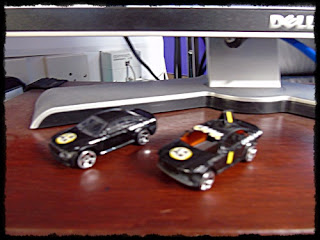 Stewart thinks we should have a radio station car which we could all use, he left these possibilities in the studio.

Stewart I think we should approach our neighbour ASTON MARTIN and ask them to give us a car.  No worry, I will look after it and keep it at my home.  I'll drive it every day to make sure it is working OK.

By the way it's Stewart's birthday today, I won't give his age away and tell everyone he is 49 years old. Stewart I think you are not very good at Maths, you are at least ten years younger than that.

What did you have for breakfast ?  Here's a couple of before 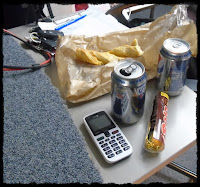 and after pictures of my breakfast in the studio. 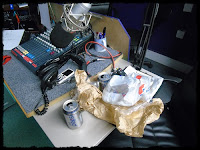 Radio CRMK is a family, we are a team. I am the newbie but from Day One I felt that warmth of the family round me.

I returned home from broadcasting to find a message on my computer from Kevin who presents BETWEEN TWO WORLDS on Monday evening.

A veritable mix of music being played and a lot I haven`t heard for a long time. Good work.

That was so kind Kevin, THANKS. Do you include this track in the "veritable mix of music ? 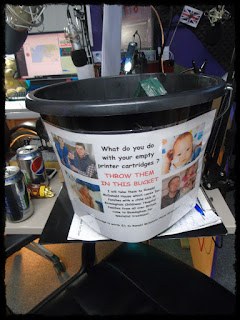 I popped a bucket into the studio for presenters to bring in their empty printer ink cartridges. Each cartridge is worth £1 to Ronald McDonald House in Birmingham. They are recycled and used to help support families with a child sick in hospital. Since I was last in the studio so many had been left by fellow presenters.

Video has certainly not killed the amazing Radio CRMK. 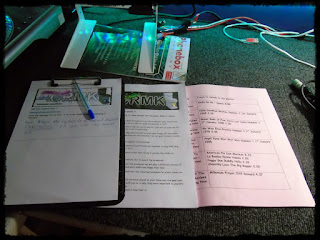 To formally unveil our toilet twinning certificate we are having a New Year Marathon Broadcast. I will be anchoring this starting at 11.30pm on Monday 31st December and running all the way to noon on Tuesday 1st January. I today left in the studio a draft copy of the playlist and schedule. CHECK IT OUT HERE  Would you like to be a guest on this show ?  Come in and have a bit of fun with the music ?  E-mail me at inspire@crmk.co.uk Come and be a part of the world's greatest radio station.

After I paid over the money for the toilet twining project another £10 has been donated.  I was going to send this to the charity co-ordinating everything but I have an idea. 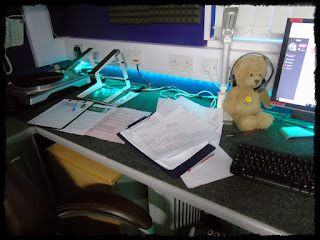 When we do the New Year Broadcast how about we have a collecting box for those coming into the show into throw some loose change into.  Friends can sign up for a prize draw. In the last hour of the show we draw the winner.  The prize ?  We will use the money to twin their loo !

To go back to Stewart's poem, let's start a world-wide infection of smiles.

Leaving BBC Radio last night I was asked for a bouncy, fun track they could play.  I did not play it this morning but The Beeb did last night and dedicated it to our toilet.

THANK YOU BBC Three Counties Radio for letting me come along last night. Thank You FABULOUS RADIO CRMK and all of our amazing team for letting this newbie share music via the broadcast desk.

I'll be back in the studio tomorrow with LET'S INSPIRE MK where the sub-title of my show is HEART v HEAD.  Then on Thursday I will have my WAKE UP WITH THE CLASSICS show which is WHERE CLASSICAL MUSIC MEETS ROCK AND ROLL.  I am so looking forward to broadcasting that !!!!

For all the fabulous shows broadcast by an amazing team of DJ presenters on RADIO CRMK simply go to www.crmk.co.uk and CLICK ON LISTEN

Smiling is infectious, you can catch it just like flu -
When someone started smiling at me today I started smiling too.
I walked around the corner and someone saw me grin.
When he smiled I realised I had passed it on to him.
I thought about the smile and understood its worth.A single smile like mine could travel round the earth.So if you feel a smile begin do not leave it undetected
Start an epidemic and get the world infected !

Posted by The Sunshine Smile Crew at 02:52