Who do you hate the most ? 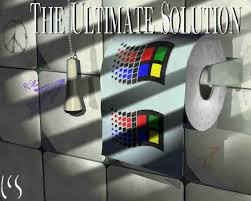 Do you think that one day somebody will invent a computer which   actually  works ?

If they do it will NOT be Lenovo and Microsoft will not be the operating system.

If Microsoft and Lenovo made pianos they would sound like this !

Before he met me Josh did not know anything about punk. I have played him such tracks as Friggin In the Riggin and Who Killed Bambi. Yesterday I was playing what is generally known as my SILLY CD in the car. Josh wound it back and repeated Who Killed Bambi. Looking in the mirror I could see Jelena's horror and astonishment.

The BBC still says it will be a warm, fine day. But that is The BBC - The Bullshit Broadcasting Corporation so who knows !

QUESTION: Who do you hate the most ?  Microsoft or The BBC ?

The music here is being played by my friend and next door neighbour, Graham. I have asked Graham to be my guest on

I have asked Graham to tell me his ten favourite tracks which we will play and chat about live on air.

I am putting together my top ten. I am thinking to include this.

In the coming weeks I plan to invite a series of guests, could be you !  What would you including in your top ten songs.

I won't be inviting Josh, far too early in the morning for him. He struggles with car boot sales twice a week.

I HAPPEN TO KNOW THIS IS HIS FAVOURITE SONG.

I do like to hear him sing along and try to fit Jelena into Jolene.

BTW yesterday's page pulled a great number of readers/listeners....129. Since I started writing my blog the total readership now stands at 69,975. Perhaps we can have a music party tomorrow to celebrate seventy thousand !

Never mind seven little girls, my car is packed so tight for the boot sale I am not sure there's room for Josh, Jelena and myself to fit in.  Oh well I guess I had better head off to pick them up then make our way to Bletchley Irish Centre and the first of this week-end's boot sales.

Posted by The Sunshine Smile Crew at 20:51