Dreading today but looking forward to it ! 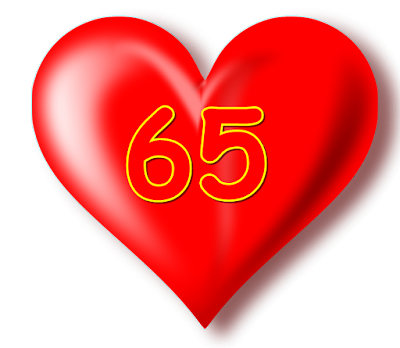 I put something on Facebook yesterday, something which attracted 42 comments then with shares and likes, shares and messages there was a total of SIXTY-FIVE hearts of love.

I use Facebook a lot but am not brilliant at negotiating my way through its menu. I have tried but can not get back into the archive to find a post I made in January this year. I did not share that post on Google Blogger so it's lost 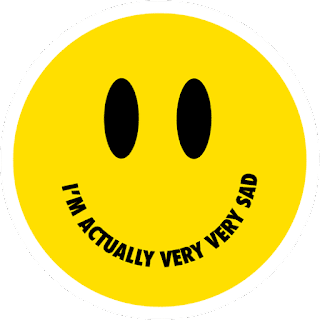 I can not even remember the exact wording of that post to enable me to rewrite it and put it here on today's page.

I spoke about a young man I had seen begging outside Morrissons Supermarket in Werstcroft. I said how tragic it was.

In a later post I shared how I went back to Morrissons to find him and give him something to eat but he was not there. A third post said I had found him and given him £20 and a packet of Mars Bars. I made my gift and walked quickly away. As I walked I could hear him protesting I had given him too much.

A day or so later he saw my car pull into the car park and called after me but I did not hear him. After doing my shopping I went across to where he was sitting and talked.  I asked if he would mind telling me his name, it was Josh. I then asked him how old he was and was amazed when he said 26, I thought he was much younger. I remember that meeting very clearly, very clearly indeed. I was sitting on the floor outside Morrissons with Josh, as I made to stand up he took my arm in his hand and helped me.

A day later he and I  took my little dog Jake for a walk at the Saint Giles Park near to Morrissons.  I had my camera with me to take his photograph in order to share it on Facebook. Josh did not want his photpograph to be taken, he did not have the confidence. 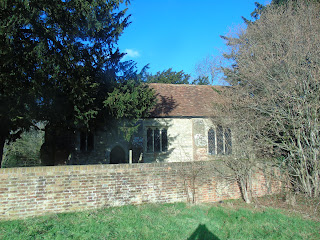 I did take some photographs, this is one from that day but Josh is not there.

The closes I got to capturing Josh on camera that day was his hand, out of shot, on Jakes lead in the image below. 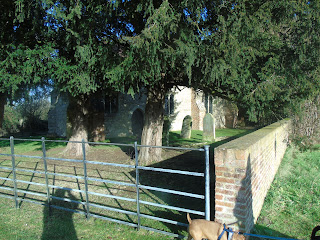 Josh was living in a tent adjacent to Morrissons Supermarket.

Dianne Walsh gave Josh a phone, I remember the network was Gif Gaf, so he could keep in contact with me. I do remember the first message he sent to me from 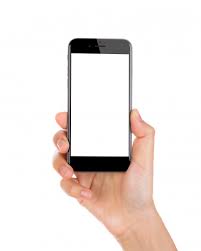 that phone began - Hello m8 it's Josh the homeless lad from Morrissons.

Dianne you were the first lovely person to show love to Josh. You need to understand just how much your love that day set in motion a train of events which changed his life.

I was working at the time as Audience Development Manager at Secklow 105.5 Radio. I was not comfortable with the way the station was being run then when a presenter I had given so much time and support to made some very unkind comments about my new friends I resigned and walked away.

Kindness from Dianne and selfish unkindness from someone at the radio station who I thought was a friend.

Alexa Watson contacted me on Facebook telling me to take Josh to The Winter Night Shelter who would give him a bed for the night. During the day he would beg outside Morrissons but at night he would have a bed in a communal dormitory somewhere in the city.

I raced to Morrissons but Josh was not there. Where he normally sat was a young woman. I asked where Josh was. She explained she was his partner, she and Josh had been together for six years. She had the phone so we could not call Josh who had gone for a walk.

This lady was Jelena. I gave her money and we talked. When Josh came back I told them about the shelter and asked them to come with me.  Josh said he would come but Jelena refused. She said she did not want to repeat an experience they had of being given hope then being thrown back on to the streets when the weather got warmer.

As we got into the car and I turned on the engine the CD started to play. I reached to turn it off. Do not turn it off, Josh said, I like music.

Josh and Jelena turned down overnight accommodation, they did not wish to sleep apart. 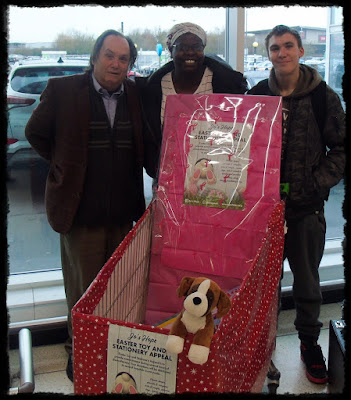 Here is a picture of Josh taken round about the same time. It is the very first picture Josh allowed himself to appear in. 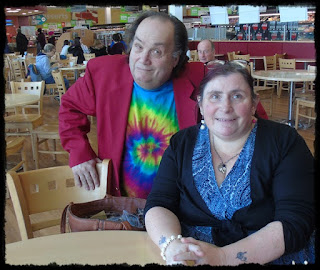 Josh took this picture of Magiie and I.  We met up in the cafe at Asda. Maggie gave Josh and Jelena a crocheted blanket of love she had made for them.

I managed to get Milton Keynes Council to accommodate Josh and Jelena permanently, not to throw them out on to the streets when it became warmer. That was six months ago. 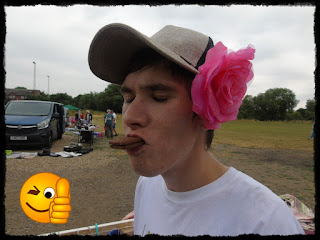 Josh no longer has any care about having his photograph taken. Facebook is littered with them.

Not quite so many of Jelena as she is usually the one behind the camera !

But here's one pic taken on a very hot day at a car boot sale. Maggie go you recognise the blanket Jelena is resting on ? 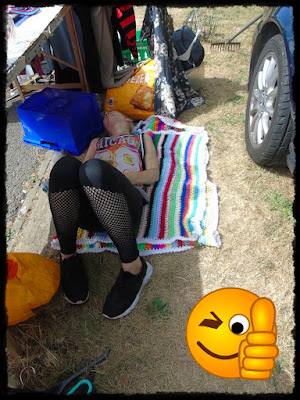 That blanket of love came to the boot sale for Jelena to rest on before going back to hers and Josh's bed.

I am not going to pretend that the past six months have been easy.

Working with Milton Keynes Council to secure my two friends has been a nightmare but that is nothing to the nightmare Josh can give me. Sometimes I think to myself why ever did I give him that £20 and packet of Mars Bars ! he can, and does, drive me crazy !

Yesterday Josh, Jelena and I attended an assessment meeting for them to receive permanent housing. It was a lovely meeting at which Josh described me as his angel. Jelena sat for a time holding my hand. We were asked how Josh and Jelena would be able to furnish an empty new home. Don't you worry about that, I said, you will need to give them a ten bedroom mansion to accommodate all the love 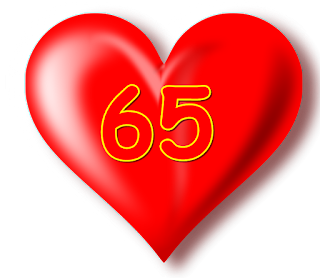 my friends will give them. Was I right or was I right ?

Josh has mental health issues which have him signed off from working for two years. The benefit system is a nightmare and weeks after first starting to process things proper payments are not in place, 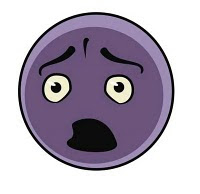 Do you know what ?

I am DREADING today !

My car has not been unloaded yet from Sunday's boot sale.

Maureen is at work all day so I have two doggies to look after.

I have 65 messages of love to reply to from yesterday.  I do not use a smart phone so everything has to be done at home using the PC.

I have to take Josh to a doctors appointment and also a dentist appointment. Yesterday he developed a terrible abscess on a tooth so goodness knows what that dental appointment is now going to entail.

I may drive a big car but no way is it going to be big enough to fit in, collect and take to the new home all of the gifts of love offered 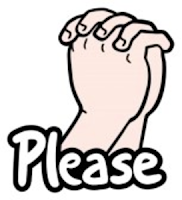 If I get to the end of today with my sanity intact it will be a bit of a miracle !

But isn't this a lovely problem to have ?

Speaking with Jelena on the phone last night, Josh had gone to have his hair cut, we both had tears running down our faces. 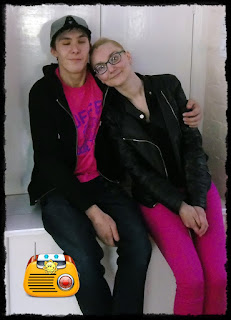 What a wonderful day it was when I gave that man begging outside Morrissons £20 and a packet of Mars Bars.

Josh and Jelena have recently made me their legal next of kin.  That is an honour but a BIG responsibility.

YES I am dreading today. So let's structure the love. 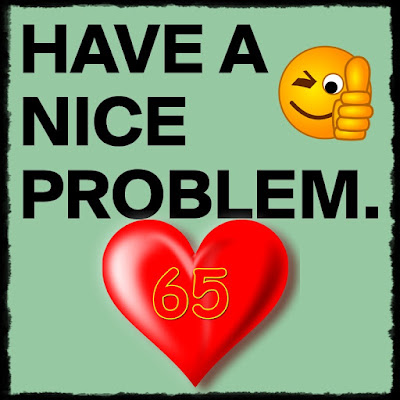 I guess the first thing that has to be done is for me to unload the car from last Sunday's boot sale.

Then I need to wait for Josh to call and say he has the keys to the property. I just hope the council nightmare of red tape is set aside to another day.

We have to fit everything round a 12noon doctors appointment and a 2pm dentist appointment.

Everything from their room in Central Milton Keynes has to be moved.

I am now going to give the 65 beautiful people my phone number. Feel free to call or text me. 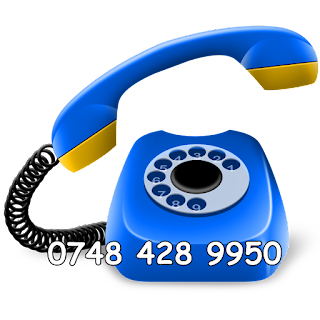 I need to talk to Josh and Jelena but I am guessing a priority of the love list would be:

We can then work on everything else.  I am NOT going to be able to fit many of the gifts of love into my car. Does anyone have a large hatchback or van they could offer to help ? 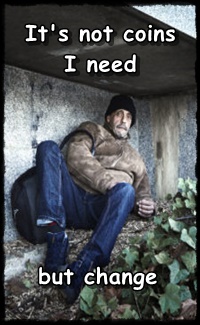 We are NOT going to be able to accomplish this in a single day !

Our dear friends Josh and Jelena have now got the change but they need the coins !

On yesterday's blog I talked about the money from the Boot Sales. CLICK HERE.

The weather forecast for this week-end is good. We need to make a MINIMUM of £200 this week-end. Some money will go to the Food Bank, some to Children who are sick in hospital. Let's forget any admin costs for Let's Inspire, I'll deal with that. We need COINS to help Josh and Jelena set up their new home. 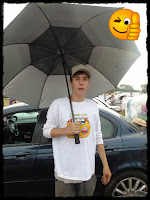 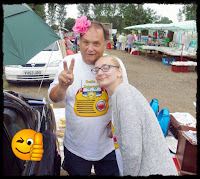 We need STUFF to sell. We do not really have enough left to make £200, well we could if we sold everything.  PLEASE have you got anything we can sell.

There has been no music on today's page, that's a first. I will play something to end, something which is very dear top me. It is my favourite song of all time, it is the best piece of music ever written. I have always tried to live my live by these words.

I am playing it now for all you wonderful, lovely people who have been a BRIDGE OVER TROUBLED WATER for Joshua Morgan and Mrs Josh aka Jelena. 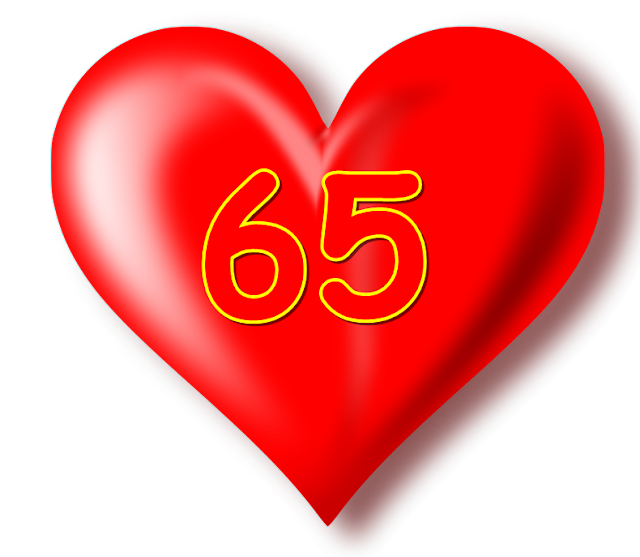 .15am car unloaded - knackered ! 30 people have so far read this page - guess that's because it was late being published. 378 yesterday.