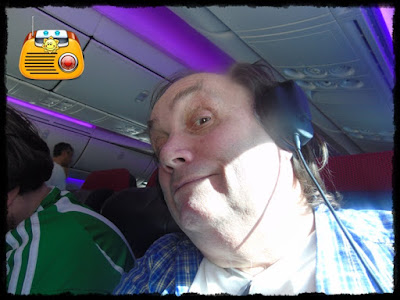 We had a great flight.

I am going to try to tell you the story of our flight and arrival in The City By The Bay then go back to sleep. TRY. 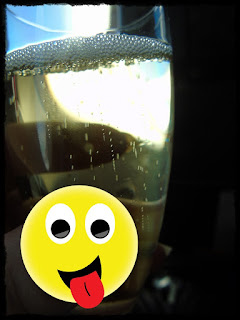 Virgin Atlantic are mega stars of the air. Thank You Sam, Leonite Sam, we were welcomed on board with champagne.

I do not drink but could not turn down such kind hospitality. It was VERY nice.

Food on the aircraft was delicious. Shortly before landing the crew came round and gave us all some sweets  GUESS WHAT ?  Love Hearts..... SMILES AND LOVE. 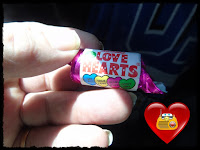 I am going to play some music.

I will explain LATER why I have chosen this song and will also explain that I have not become an alcoholic no matter what people have been putting on my Facebook timeline.


After take off we headed North to Scotland. It was a clear 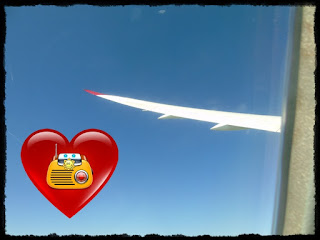 blue sky so I could track every mile of the journey. On the seat in front of me a map showed  our flightpath.

Quickly we left Scotland behind and crossed over Iceland ... the country NOT the supermarket.

Next to Greenland.  I put an Elvis Presley album on to the entertainment system. Heading to the US of A I liked the song An American Trilogy. 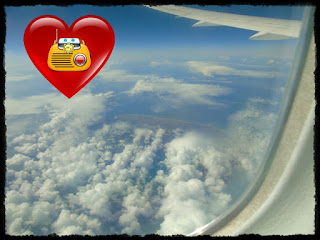 The air conditioning was on full pelt but the sun on the window made it very hot.

When the crew came round with ice cream it was very welcome. 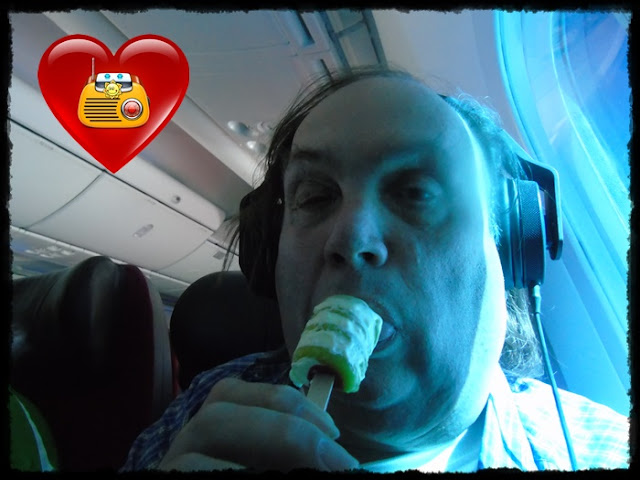 Next we flew over Greenland but that part of our journey was covered in cloud. 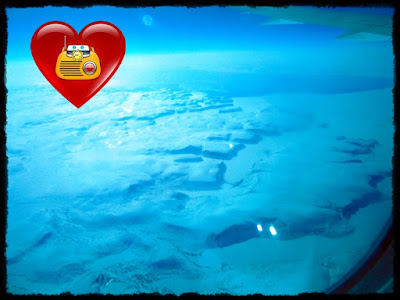 Out over the Atlantic and Canada. Mile after mile after mile of Northern Canada was snow bound. Spectacular views which the camera here does not do justice to.

Hudson Bay was one giant iceberg. 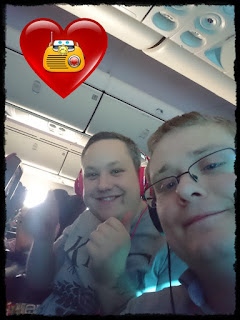 It was a very comfortable flight. The cabin crew were so lovely .... SMILES AND LOVE all the way.

This is the 7th time I have been to San Francisco so I did know what was coming up on the flight path.

Before I tell you about that bit of the journey let's play something for the captain and his colleagues up in the nose of the plane. 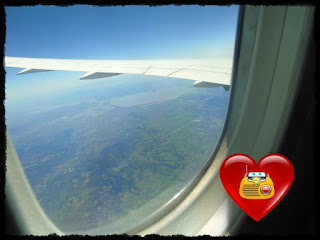 It was a very smooth flight but I knew when we crossed the Rocky Mountains it would be different.

The Rockeis are the backbone of America, running the length of the country.

TURBULENCE !  The plane bounced its way over The Rocky Mountains ! 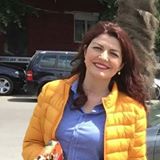 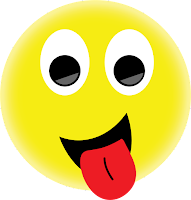 I  want to leave the flight for a moment and play something for a very dear friend and Radio Love International Listener ALMA.

It is Alma's birthday.  Hey Alma I remember being at your 20th birthday. Was that really a year ago.

Alma it has been many years since I last saw you but it was good to video chat the other day.  Say HI to Grace and to Chris for me. Looking at your pictures on Facebook you have not changed so I have picked this birthday song for you.

Right back on Flight VS19. 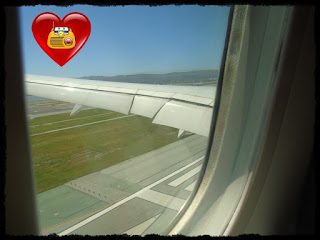 Those last few miles fell away and soon we were on the runway at San Francisco.

Anyone who has ever been to America will know this country is very friendly with some lovely people but the government recruits only miserable, NON smiling, unfriendly people to work on its immigration counter. President Trump sort this out. US Customs made up for it with a welcome, waving us through without a second glance.

SIXTY DOLLAR taxi ride and we were at our hotel.

We had booked rooms with a view !  Here's he view from my room. 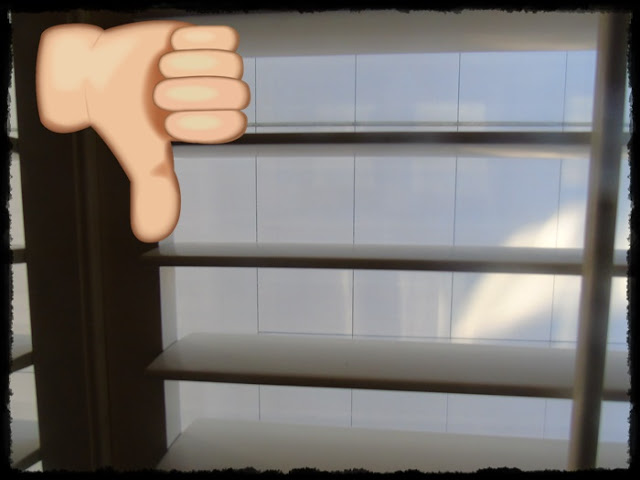 The plan was to take a walk, find somewhere for a drink and something to eat. My friend made me walk FOUR miles to Fisherman's Wharf. 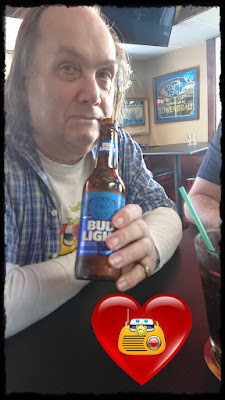 There was a strange smell which now and then hit me as I walked.  I am not sure if it was the drains or CANNABIS. That is a legal drug in California.

NO I DID NOT TRY ANY and NO I did not drink this beer. The photograph was staged !

No I am NOT becoming an alcoholic.

Another piece of music.....

Something for those who were puffing cannabis on the streets of San Francisco last night.

We were in the bar for about an hour throughout which Bob Marley was playing, not live of course. You'd need a bit more than a puff of weed to make that happen.

Another song from Bob.

We did a bit of shopping before making that FOUR mile hike back to the hotel. 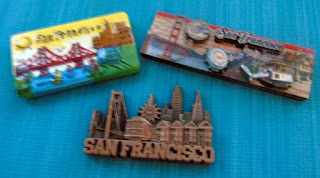 Jelena, you said you collect fridge magnets. With the Golden Gate Bridge in view I found a fridge market shop and got this trilogy for you.

I also saw some shirts I could not resist so I got one for you and one for Mr Jelena. Think I 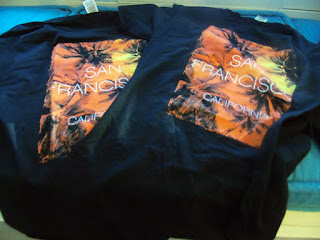 am going back there today to but one for Mrs David.

Plan is to find somewhere to have breakfast then take a TAXI to The Golden Gate Bridge.

The Golden Gate Bridge is why we are here. CLICK HERE and sponsor the four of us walking the bridge today for Ronald McDonald House and families with a child sick in hospital.

A LOT of people have already sponsored us. Let's play this for them. This a favourite of mine, a favourite version of California Here We Come.

California HERE WE ARE ! 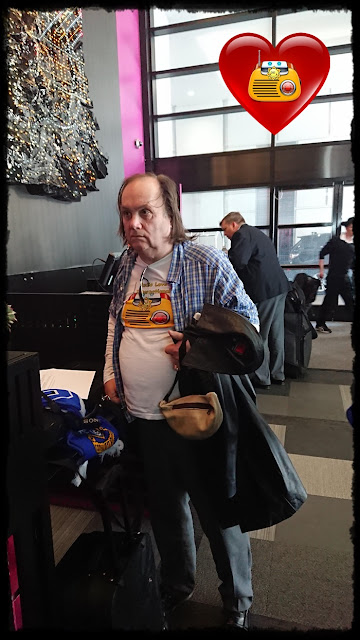 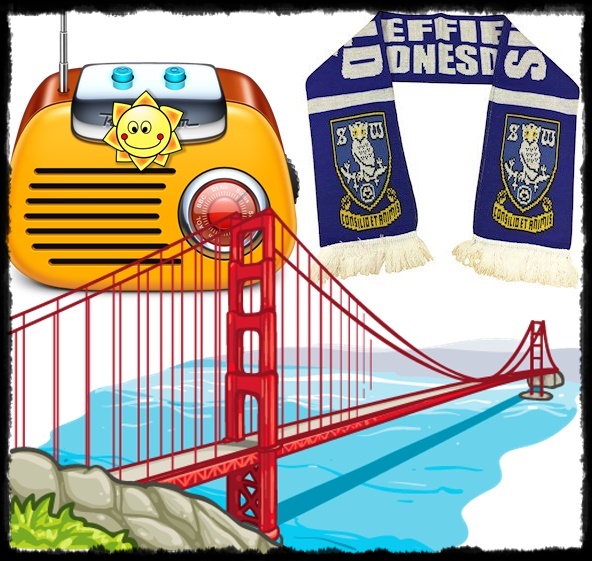 Posted by The Sunshine Smile Crew at 02:40