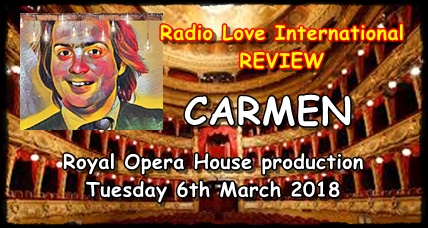 A satisfactory production - JUST ABOUT, but then an average episode of East Enders is satisfactory - just about. There were one or two moments were it was lifted slightly but at no point to the standard which should be expected and demanded of The Royal Opera House.  At no time within the three hours on stage could this production be considered good.

I watched the production as part of the Royal Opera House's live screening beamed to cinema's round the world. My unfortunate evening was spent in Cineworld Northampton. The theatre was uncomfortable with the heating way, way too high.

Anna Goryachova in the title role of Carmen was weak, weak as the music to which she sang was distant and remote. This is the normal form for any live screening broadcast by The Royal Opera House.

Some costumes were acceptable, approaching good, but most  were obviously purchased at a discount as a job lot from Oxfam.

Scenery ?  THERE WAS NONE !

Subtitles are not necessary for opera fans and should not  have been included to aid the Philistines in the audience. To add an audio commentary in FRENCH with English subtitles for a Royal Opera House production from London ENGLAND was utterly ridiculous beyond any measure of comprehension.  The person responsible for this stupidity would be better employed as an assistant, apprentice stage hand on the set of East Enders.

The first act was ruined by so many, many members of the audience turning up late. The Royal Opera House changed the time of the production at late notice, Cineworld failed to advise those who had purchased tickets.

Phones and excesses of food should be banned from performances. The person sitting next to me smelt of a stale kitchen in a pickle factory.

While a dress code perhaps could not  be enforced it is hard to comprehend how anyone could enjoy opera dressed in clothing they wore during the afternoon to do the gardening !

Dancing by the cast was excellent but utterly ruined by remote and distant sound. You would think with the excesses of Arts Council funding together with savings made by failing to offer scenery to the production and the money not spent on proper costumes for the chorus, The Royal Opera House would be able to afford a half competent sound engineer.

The audience ticket money and Arts Council funding was squandered on this ego trip and failed production.  The expression on the face of Anna Goryachova at the very end of the opera summed up beautifully the wasted three hours which proceeded it.  I trust that those responsible for my failed evening will indeed be able to find employment more suited to their talents working on East Enders.
Posted by The Sunshine Smile Crew at 20:13