Pin your love here and you WILL make a difference 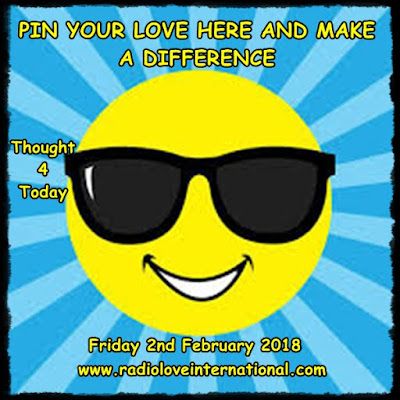 Thank you to the THIRTY ONE people who LIKED or posted comments on my Facebook Page yesterday evening. This is David The Geriatric DJ writing today's edition.

Those thirty-one beautiful messages from special people were so kind. They praised me for something I have done. I appreciate that, THANK YOU, but I would ask you to divert your kindness from praising and thanking me for doing what anyone should have done to become LOVE and direct this to Joshua and Gjlina Morgan.

You know who they are, the homeless couple who have the tent outside Morrissons Supermarket.  Right now they are no longer homeless, I will be busting my rear end to make sure that now becomes a permanent situation.  Will you support me, Josh an Lina with your love ?  PLEASE.

Let's have today's Friday Morning theme. This comes from a series of motivational tunes I popped on YouTube a year ago.  I think it is time for a new set of songs but for now here is Friday.

Josh i s writing his story which eventually he will share with people to help generate support for the homeless. I have not yet read what he has written but let me share the story I know and have come to understand. 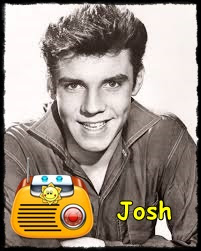 I do have pictures of Josh and Lina, I have his Facebook page, but they are not ready fo me to share them yet.  Radio Love International pictures you may have seen over the past two weeks have been taken by Josh. By being the photographer he makes certain he does not appear in any image.

There are three of us setting up Radio Love International - myself, Jo who is a barrister and Josh.  We gave Josh the nick-name THE ETERNAL TEENAGER and said he was our time lord moving through the decades playing music. We made his theme tune TEENAGER IN LOVE.

Pictured left is Mary Wilde who had a smash hit with that song was back in March 1959. I was eight years old then, Jo and Josh had not even been born.

Josh's hair is a bit shorter than that shown in Marty's picture but of a similar style. When Josh was thirteen years old he was in a road accident and smashed out his teeth. He has lost his dentures but when he finds them and smiles then grows his hair a bit he will be the spitting image of Marty Wilde above.   Let's play his theme tune.

I am so proud of my LEONITES, my former students from Leon School. When Rebekah died you wonderful people swamped me with love.  Most but not all of those comments last night came from Leonites. Some of you have already stepped forward to help this young couple.

When Leonite James died on the streets of Milton Keynes before Christmas I was gutted.  I had not previously been in the least bit interested in the homeless but at that point I changed my attitude.  I saw this young man sitting outside Morrissons Supermarket and felt sorry for him. I guessed he was about 19, actually Josh is 27.  Feeling sorry does nothing except lift the ego of the person feeling sorry. I went back one morning to see this boy and give him some money.  He was not there.

The next time I saw this young man I gave him some money. Josh spoke about it last night saying: You folded a twenty pound up note very small and pushed it into my hand.  On some future visits to the supermarket I gave him money and always a pack of Mars Bars - when I 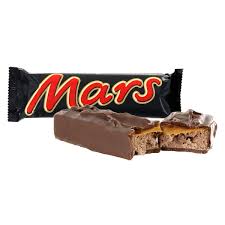 was a kid the slogan was A MARS A DAY HELPS YOU WORK, REST AND PLAY.

A Leonite told me about the Milton Keynes Winter Night Shelter. I e-mailed the centre, they immediately e-mailed back asking for my phone number. I gave it to them and within minutes we were speaking. I did not know the boy's name but they said to bring him to them and they would help.

I went up to Morrissons to find Josh. He was not there but in his place was a girl. I gave her fine pound and spoke to her. She explained that the lad, Josh,was her partner of five years.

I am going to play some more music. This was in the car's CD player yesterday afternoon. I wish you could have seen Josh singing along to it.

The girl, Lina, did not have confidence to go to the centre and find out what they could offer but the boy, Josh, agreed to come along. When he got into the car I turned to switch the CD off. Don't do that, he said, I love music.

He and Lina were offered overnight accommodation every night until the centre every night until mid-March.  Josh was eager to take up the offer but Lina did not want to go. She could not face lots of people and did not want to be separated from Josh at night. The centre staff respected that and said it was right for Josh not to attend and heave his partner on the street. 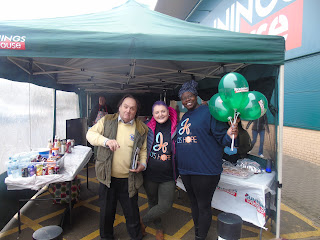 involved.  HE DID.  The following Saturday Josh and I went along to support a sausage sizzle fund raiser being held by Jo's Hope. Jo's Hope is run by barrister Jo Tomkin.

Jo, seen here with the balloons, is a very special person. I asked her if she would like to be involved.

So now Radio Love International is being managed by a trio - The Geriatric DJ, The Eternal Teenager and The Lady With The Big Smile And An Even Bigger Heart.

And time now for Andy's Weather Report. Andy has agreed to continue his weather reports as we develop Radio Love International. 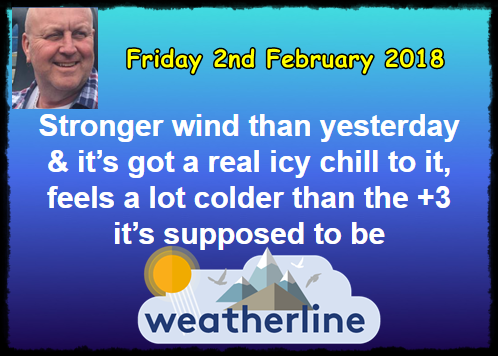 Can you imagine what it must be like to be homeless and live in a tent in temperatures like that ?

Yesterday morning I e-mailed the winter night shelter and asked what had to be done to get Josh and Lina housing benefit so they could be got out of their tent.  The process has started.  At half past three I received an excited telephone call from the shelter saying due to the cold the council had a place for Josh and Lina. By ten past four Josh and I were at the council offices. By ten to five he had keys in his hands.

I received a text message from Josh thanking me. When I got up this morning he had sent me this: I will try to remain positive.............he then went on to give me an e-mail address he had set up.  Lovely Leonite Dianne has given Josh a smart phone so he can work on Radio 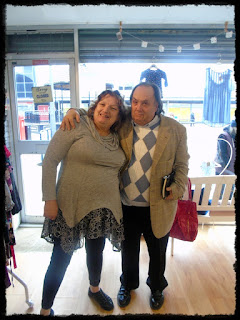 Love International.  Josh and I visited Dianne in her daughter's shop TWICE. He took this pic of The Geriatric DJ with Dianne.

There are some lovely people about. Dianne you are wonderful and your daughter's shop is amazing.

5.25am and another LIKE has just come in from yet another lovely person wishing Josh and Lina well.

Josh, Jo and I have been having meeting after meeting after meeting with all kinds of people as we set up Radio Love International as an on-line station.  Yesterday I contacted the licensing office to obtain all we need to be within the law. Yesterday Jo and I attended a meeting with Scott, National Trust's Operations Manager for Stowe. I could see why Jo is a barrister, she handled the discussions so well.

At the end of the meeting I turned to Jo and said Should I tell Scott about Josh ?  YES.

Let's play something for Scott, this was playing in the cafe at Stowe while we were meeting.

Thank you all for those wonderful messages last night.  Let's take things forward.  Will you get behind me as I make certain the temporary accommodation for Josh and Lina become long-term and then with housing benefit and employment PERMANENT ?

Giving money or even food to the homeless is nothing more than a sticking plaster. Major surgery has started for Josh and Lina. Will you get behind me as we complete everything and move our patients into recovery ?

Those messages yesterday were praising me. That is kind but I do not deserve such applause.  Give your love, give your applause to this special young couple.  I think that Josh was a bit taken back by me yesterday. I went back twenty years into Head Of Year Mode, forceful and demanding - BANG BANG BANG MAKE IT HAPPEN.

I have told Josh all about my favourite piece of music.

Will you join me in building this bridge for Josh and Lina ?  Josh went to Sir Frank Markham School, come on Leonites let's make him part of our team and let him bring his lovely wife with him.

Posted by The Sunshine Smile Crew at 22:00