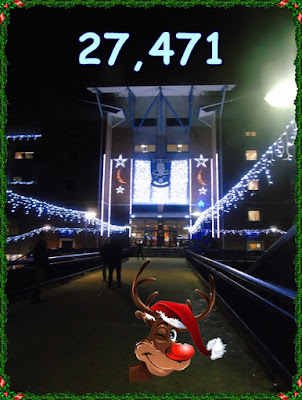 Twenty-seven thousand, four hundred an seventy-one people turned up at Hillsborough yesterday to cheer on their team. There are many so called big clubs who would not have minded having such a gate figure yesterday.

Sheffield Wednesday has not won a game since 4th December. Yesterday the team lost 2 - 1 at home to Middlesborough.  Currently at fifteenth place in the table, if something does not change in the New Year then relegation can not be dismissed.

If the club stands firm for the game - which it is, if the fans stay loyal to the club then everything will be well. Negativity breads negativity. I have stopped looking at the fans' Facebook page where too many people are demanding the manager be sacked. As I left Hillsborough yesterday evening a man was running around shouting Carlos Out ! What good did that do ?

Let me tell you about my day at Hillsborough.   Let  me tell you why I am a proud Wednesday fan. As you read what I say stand aside and think the solution Sheffield Wednesday Football Club needs for its team is the same thing we all need when we hit less than perfect times in our own lives.

Gary and I arrived at Hillsborough at  11.30am. We had a good ride up the M1 even if the turbo charger on the Jag was giving us a hard time. 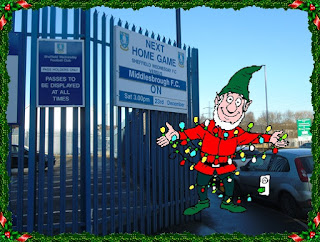 We made our way  to the club reception to leave a few Christmas gifts for the behind the scenes boys and girls - those who play a major part in making the club as great as it is.  We were spotted by the lady who runs the reception area, she recognised us - Good to see you again.  Her welcome was warm, friendly and lovely.

I said to her that in my opinion it is the work behind the scenes that makes Wednesday great. She smiled and made some comment about her not being on the pitch.

On then to the club shop - The Owls Mega Store. More than three hours ahead of kick-off it was packed. There must have been thirty or more people lining up for the tills. I waved my 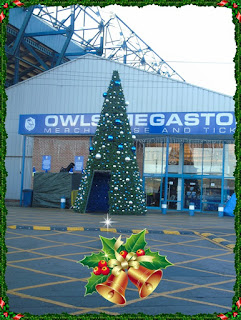 visa card at the till for one hundred and forty-four pounds  !

I got two away  team shirts which I am going to ask if the boys would autograph. When OurRebakah has its fun run on the Golden Gate Bridge in April we will then take the shirts to the two Ronald McDonald houses in San Francisco.

I got a Sheffield Wednesday toy truck and an Owls watch which I am going to use for a game of pass the parcel when my two grandsons come round later. 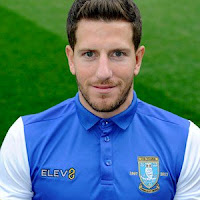 It is a tradition that I buy a scarf which I send to Ronald McDonald House in Birmingham to give to a family.

Back then to club reception and the pre-match lunch. We were early so a member of the hospitality team took Gary and I on a behind the scenes tour.

One area we did not actually get to see was the physio room. The door was ajar and our host called out ARE YOU DECENT ! Club Captain Sam Hutchinson yelled back NO !

While we were dining in the finest possible style fans were being greeted with mulled wine, Santa was handing gold Sheffield Wednesday chocolate coins to the children. How many BIG clubs did that yesterday ? 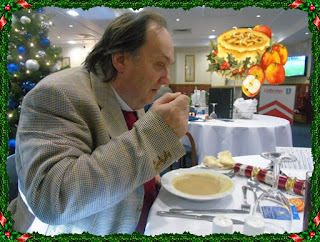 The white onion, stilton and sherry soup was delicious with a capital D.  I dropped a hint to get the recipe from the chef but that just brought  smile. I have challenged Maureen to make some.

From the menu I selected Christmas Pudding Trifle for desert. A novelty but every bit as yummy.

Eating in Sheffield Wednesday's  Dooley's Restaurant is a gastronomic extravaganza.

Staff we wearing blue and white Santa hats. Being a big kid I wanted one. Had they been on sale in the club shop ?  Had I missed them ?

Walking the short distance from the hospitality suite to our seats I heard a voice behind me say: There you are, I've been looking for you.  It was Club Communications Director Trevor. He put a club Santa hat into Gary's hand who put it on my head for the game. 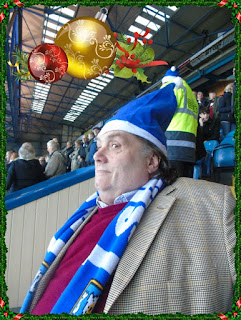 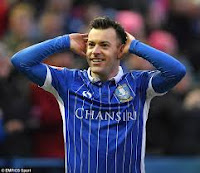 The OurRebekah Brummie Owls project sponsors goals the boys score for Ronald McDonald House in Birmingham. YES YES the team lost yesterday but Ross Wallace scored a goal which has added ONE HUNDRED POUNDS to help run The Mansion of Love. 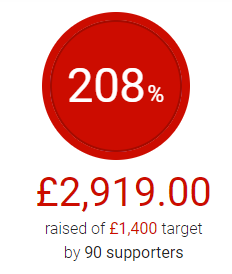 I have been thinking hard about our Brummie Owls project and want to make two suggestions which I hope everyone will support.

FIRSTLY, if we are going to take this project forward in 2018 and make it a more significant source of support I need to hand it over, we need to appoint a secretary/manager to be in charge.

SECONDLY, in running Brummie Owls I am very careful not to invade the club fan base. 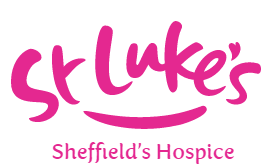 Sheffield Wednesday has its own programme of support for sick children in Sheffield Hospital. It also offers support to St Luke's Hospice.  I have decided that I want to support the work the club does within its community programme.

Yesterday I found the prefect way we can do this.

On Saturday 14th April people can be sponsored to become a Sheffield Wednesday player for a day. A minimum sponsorship of five hundred pounds is required. I am trying to persuade Gary to take part but it is the week before we all fly to San Francisco so getting two Saturdays in a row off work may be difficult. If Gary can not play I intend to ask the club to nominate a player we can all support. Let's add one thousand pounds to the sponsorship. Will you do that with me ?

We are going back to Hillsborough on New Years Day. I intend to explore then how we can become involved to support Sheffield Wednesday support St Luke's Hospice.

The team lost yesterday ! The club did not play its victory anthem but thought I would play it now. As I do that I want to say two things.

ONE: Come on boys !  Get your act together. You are part of the greatest club in English football so let's see a bit more power, a bit more passion in the games. Forget the negativity surrounding the play. BANG THE BALL IN THE NET !

TWO: There is far more to a football club that two goal posts and a bit of grass between them. It is that philosophy that makes Sheffield Wednesday Football Club what it is.

I'll be back at Hillsborough on Saturday 1st January. Gary and I have our names down for the GRANDSTAND VIP HOSPITALITY AREA. See you all then.  HAVE A HAPPY CHRISTMAS ONE AND ALL.

I have taken the theme from Wednesday Wonderland for today's Advent Calendar.

On Christmas Eve this should be our last window but I plan something special for tomorrow Christmas Day, something for all the wonderful people who have been a part of OurRebekah since it was set up seven months ago.

Speak to you then. 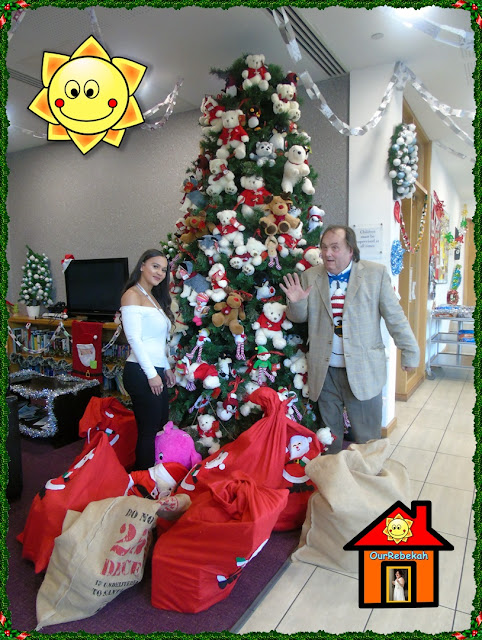 Posted by The Sunshine Smile Crew at 00:36