Should yesterday be considered a failure or could it just possibly have been a success ? 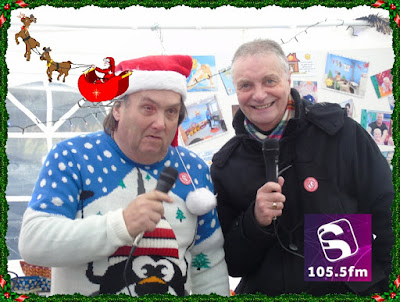 When I got into the car at 4am yesterday morning to start taking everything we needed for the Secklow Radio Roadshow up the Watling Street to Wrigglies Exotic Pets it was a cold but star filled night.

I made three trips to the location then was joined by Leonite Andy Ward and his son who were the roadies setting up the tent.

It was going to be a great day. Once the sun rose and people started to arrive we would have a fun packed party.

We would have people dancing in front of the tent while we promoted Secklow 105.5, supported Wrigglies Exotic Pets celebrate three years of operation and raise some money for Ronald McDonald House in Birmingham. 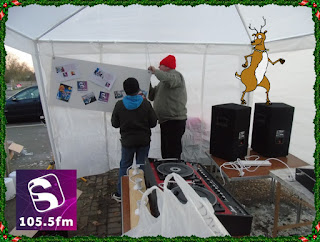 Andy and his young assistant made a good job of setting the tent up even if the instructions were hard to read in the dark, the metal poles chilling to the touch and the pages of the instruction book freezing together !  Yes they did - honestly -the pages freeze together I mean.

With dawn it was a blue sky. We were all set for a big, big dance party. 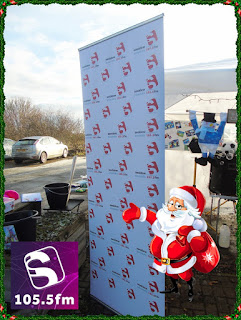 But contrast this picture on the left with Secklow 105.5's presenter Stuart Moore standing in the pouring rain handing out chocolate coins to people as they made their way into Wrigglies shop. 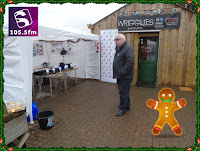 The dance area in front of the tent as you can see was deserted.

Stuart did a great job and refused to let the weather dull his spirits.

The shop was packed but our dance floor empty.  It was wet, it was cold and it was so, so disappointing.

The various games I had spent hours preparing were washed out and ruined.

I was cold, I was wet and my back ached bending over the equipment. The collecting buckets for Ronald McDonald House had just a few coins in as people sped past us to get into the dry and the warm of the shop. 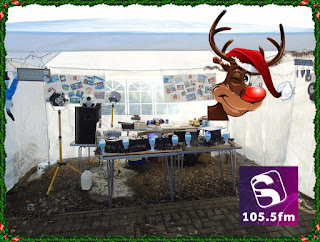 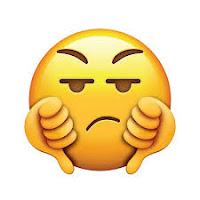 That must sound like a recipe for failure, would you  not agree ?

All of the ingredients for failure were there in the cold and in the rain.

I could end the blog at this point, write the day off as a failure and wish it had never happened.  My back is still giving me jip from bending over the music decks all day in the cold and the rain.

Let me play today's window from the OurRebekah Advent Calendar then I will have a bit more to say.

The sun may have been hidden way behind the rain clods but actually Saturday 16th December 2017 was a FANTASTIC day. 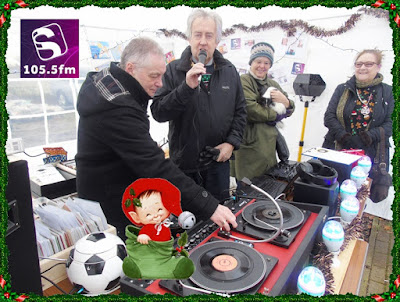 Radio Secklow 105.5 is a COMMUNITY radio station. The aim of the roadshow is to take community radio into the community.

The leaders of our community are Mayor David Hopkins and his wife Susan.

The sun certainly shone through the microphone when Mayor David picked it up.

We had THREE Secklow 105.5 presenters with us during the day. Seen here above is Tony Ingeldow who presents Tony's Time Tunnel and Afternoon delight. Standing on the other side of Mayor David is Catherine Rose who presents Classics From Scratch. 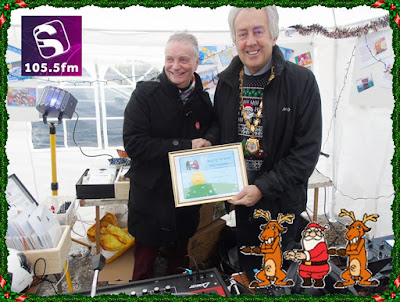 Tony Ingeldow is responsible for getting me involved with Radio Secklow 105.5, it was his fault I was standing there in the cold and the rain !

Tony and I met when he supported OurRebekah at the now famous Frog Challenge at Wrigglies Exotic Pets. Thai is not yet three months ago. Tony and his wife Susan have done so much to support OurRebekah and Ronald McDonald House in Birmingham I was so pleased to name Tony as our Smile of the Month. Mayor David made the presentation.

When I counted the money from the buckets yesterday I had to drain the coins from the water !  There was not a fortune in there but within the coins were are two lovely, special and sun-filled things I have to tell you. 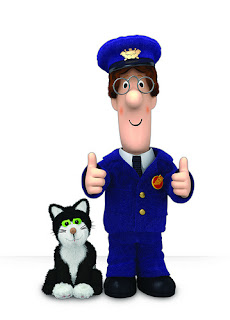 for one night. That's a good figure. The postman, delivering the morning mail to Wrigglies put a £5 note into the bucket. THANK YOU SO MUCH Postman Pat. How lovely, how kind.

My own postman knows what I do for Ronald McDonald House. He knows all about OurRebekah.  Last week I had to go to the sorting office to collect a parcel which could not be delivered as I was out.  Staff there knew who I was and what I do. Could it be that Postman Pat at Wrigglies on Saturday also knew of the support we give to Ronald McDonald House ?

That £5 note to me is worth a million pounds when counted in terms of love. That love alone made yesterday a success.

Smile Of The Month Tony Ingeldow had me on his show last week to tell people all about the roadshow.

On Tuesday Tony will be playing music with me at the West Bletchley Community Centre Christmas Tea.  Then on Wednesday I will be back with him telling everyone about yesterday. Tony, do you think you could play Singing In The Rain ?

Seen here cuddling Chloe the skunk is Secklow Radio Presenter Catherine Rose of Classics Form Scratch fame. Catherine, did nobody tell you that Skunk Chloe has not had her scent glands removed ? 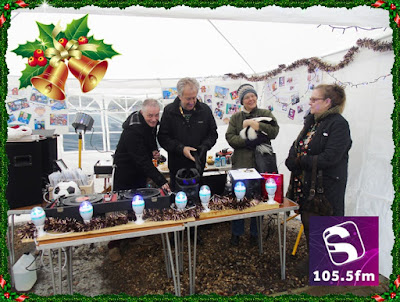 I am to appear on Catherine's show as a guest on Friday 29th December. I have been asked to pick four pieces of music for the show. Making a choice of just four is not an easy task but I do know what they will be. I am not going to tell you now, you will have to wait until the 29th to find out.

This afternoon I am going to watch a performance of The Nutcracker by The Bolshoi Ballet. I can guarantee one piece of music I will select is from The Nutcracker. Yesterday Catherine played the Dance Of The Flowers. Actually that will not be my choice, not that is unless we could extend the show and play the entire score.

Mayor David and I talked about how we could perhaps bring The Nutcracker to Milton Keynes next year. Catherine we need to talk about that. I know EXACTLY how you and I could do that for next Christmas. We won't make it an outdoor event though !

I ran an idea past Catherine yesterday for something we could do in May net year which will be outside !  It doesn't rain in May does it ? 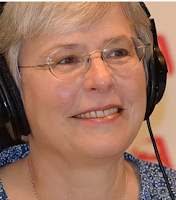 Thank you for your support yesterday Catherine. It was a great day wasn't it ?

Stuart Moore found several guests for his show yesterday. I am so pleased that one of them is to be Ro, the manager of Wrigglies Exotioc Pets.  Guess what ?  Another guest Stuart lined up for his show is Yours Truly.

Stuart you were amazing yesterday. THANK YOU. I am looking forward so much to our working together again in the very near future. 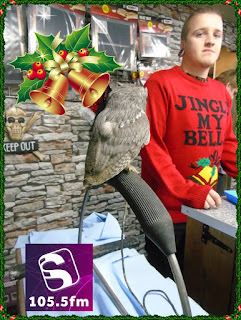 That's Ro on the right. The guy asking you to Jingle His Bells not the owl watching him.

Back to the rain for a moment. 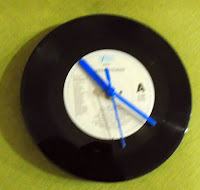 The deluge washed out all of our games and competitions. One was to win a clock made from a vinyl 7" single - something by Shakin Stevens.

When six year old Tyler turned up with Mum and Dad I gave the clock to him.

Tyler was the star of our fun run last October. 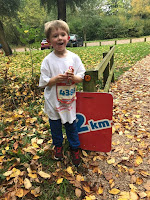 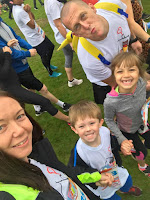 Tyler's Mum, Ann is an OurRebekah Smile Of The Month winner. Tyler's Dad, Mark, is a Shakin Stevens fan so we played a dedication for him yesterday,

Just for you Mark, Shakin Stevens and Merry Christmas everyone.

One guy who NEVER went inside and out of the rain is this chap. The rain and the cold did not ruffle his feathers ! 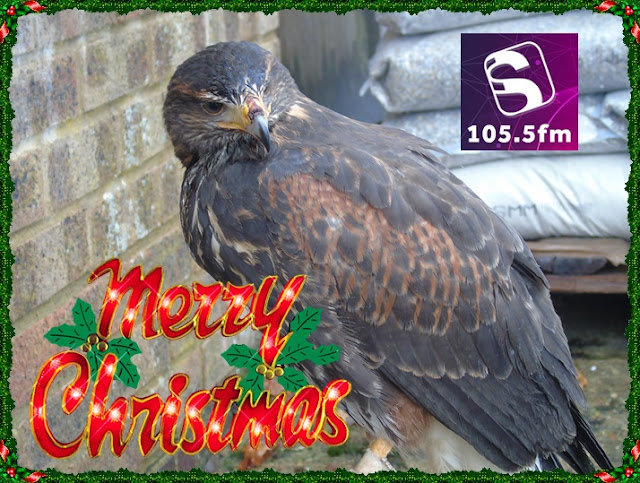 I am now bringing today's blog to an end.  I am going to indulge myself with a bacon sandwich then drive back up to Wrigglies Exotic Pets to collect the last of the equipment from yesterday. I am going to suggest to Ro that we take the Secklow Radio Roadshow 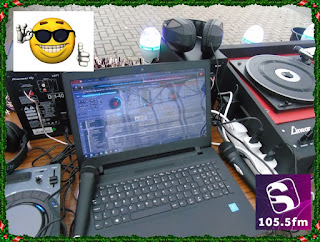 back to his shop in the summer and try again for a disco party in the car park.

So was yesterday a success ?

Of course it was !

LIFE IS A DISCO and some days you have to DANCE IN THE RAIN
Posted by The Sunshine Smile Crew at 22:19