The Summer Of Love 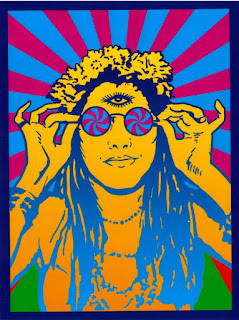 It has been FIFTY years since THE SUMMER OF LOVE.

For those who were around at the time I think we tend to look back upon 1967 through rose tinted glasses.

For those who are too young to have known what we now call The Summer Of Love, do not believe all of the legend. It was not quite what history would tell you it was.

1967 was the year I left school and launched myself on an unsuspecting world. That was good.

The music of 1967 was, and still is, the very best anyone has ever known.


I am looking forward to the OurRebekah Golden Gate Bridge Fun Run in San Francisco. I have been to San Francisco many times but have never actually been to Golden Gate Park. In April I plan to stand on Hippy Mound.  I have my tee shirt ready and five months to grow my hair. 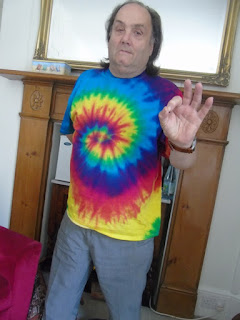 My experiences this year eclipse anything and everything that may or may not have happened in San Francisco five decades ago.

When I reported on last Sunday's BIG FUN RUN, when I put the gallery on-line I did not include the universal love that was everywhere to be found that day.

We were one team of so many who took part in such a well staged and managed event with people there representing such a wide variety of good causes.  Every single one of them was there with love and passion for the good cause they were representing.

I don't know about others who were there but I could feel LOVE flowing everywhere. 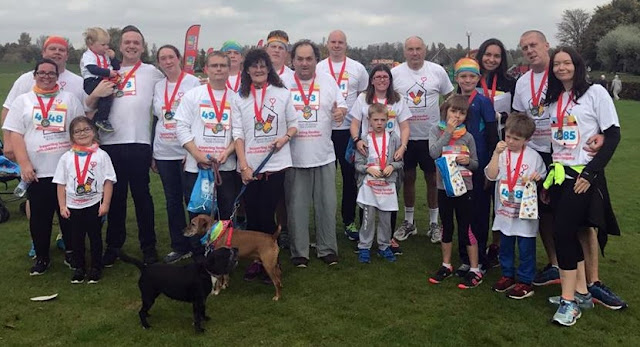 Mayoress Susan Hopkins said to me at the very start of OurRebekah, when we were setting everything up, that it does not matter which good cause you support providing you do support one. 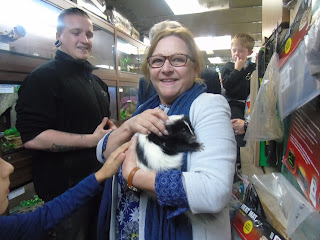 Here is Mayoress Susan at our Frog Challenge stroking Chloe the skunk. Nobody told her the skunk had not had its scent glands removed.

Susan and her husband, Mayor David, brought so much love to our event. They may have come as the First Citizens of Milton Keynes but the time they spent with us was spent with them bring so much love.

Look at the faces of David and Susan as they supervise my handling that giant frog. 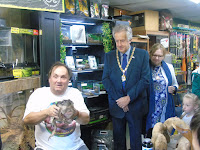 Let me show you a letter. This was written and sent to me before Rebekah died. 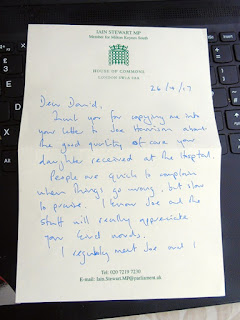 Every word on that page is full of love.

I do not have the letter any more. I took it to the staff at the hospital where Rebekah was being cared for and gave it to them. 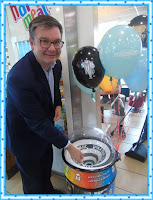 Here's the writer of that letter. MP Iain Stewart. I took him to McDonalds to spin coins for the houses.

Every coin I promise you was spun in love.

Do you remember my telling you on the bloig a few days a go about these ?

Christmas stockings one of my former students knitted and sent for our Secret Santa project. Every stitch in every stocking is knitted 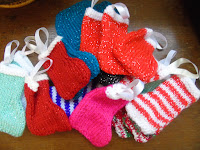 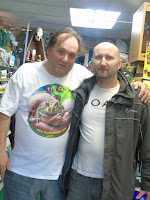 Here is another of my former students, Simon. When he turned up at our Frog Challenge to show his support and love I had to fight back the tears.

We all know that Monarch Airlines has gone bust and had all of its planes grounded. The £500 flight voucher Monarch gave us to use within OurRebekah is worthless. That is unfortunate but it does not matter. The gift was made in love and while the airline no longer exists the love is still here. No debt collector, no official receive can take that 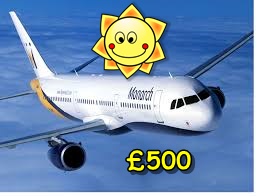 Lots of you know Jake. He took part in Sunday's fun run.  YES, the fun run was doggie friendly.

Shops, garden centres, hotels and more like to tell us they are Doggie Friendly. 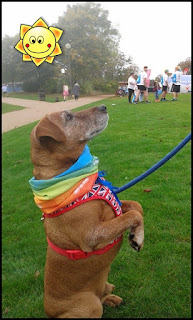 We could do with one or two businesses in society thinking it may be a good idea to become HUMAN FRIENDLY and to show a bit more love. Do you agree ?

I went yesterday into the largest supermarket in the area. Only one checkout till was open. Everyone was being herded to the cash cow self-service checkouts. 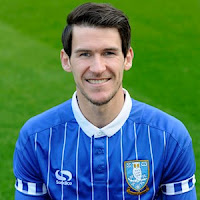 I see that my local branch of McDonalds is closed for renovation. If that renovation includes the installation of cash cow robotic self-service machines I will not be going there ever again.

Yesterday I had an e-mail from Beth at The Mansion of Love. WE HAVE THIS SORTED she wrote.

She was talking about the Thank You card sent to Keiran Lee who scored Sheffield Wednesday's goal last Saturday.

Ronald McDonald House has now taken over responsibility for sending the thank you cards within our Brummie Owl project to the club's goal scorers.  Previously I had been sending these cards. House staff thought they could inject more love by having families make the cards.

When we next go to Hillsborough Tony from Seclow 105.5 will be making the OurRebekah presentation to say THANK YOU for the club's kindness. Hey - for kindnes read LOVE. It is 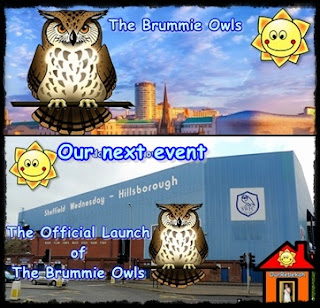 not taking away from a football macho image to say LOVE instead of kindness..

Tony remembers well The Summer Of Love and would agree with me in saying it is the year of he finest music ever to be recorded.

Our presentation to Sheffield Wednesday includes two original vinyl singles of the anthems the club has adopted.

Singing The Blues actually dates from when I was five years old.

Jeff Beck's Hi Ho Silver Lining does indeed come from The Summer of Love. Released in March 1967 perhaps that should be The Spring of Love.

Tony keeps playing Singing The Blues on his show. I am sure he does it to wind me up.

When we are at Sheffield next month I plan to ask if I can stand beyond the terraces on the side of the pitch and film fans singing the two anthems.

I have an idea that we should make a recording of OurRebekah friends  coming together to make a new recording of this song as HI HO HOUSE THAT LOVE BUILT. I intend to discuss this with Tony. Yes, we will make it happen but on one condition - I PLAY

Tony and his wife are coming to my home next week for dinner and to meet Graham and his wife. Graham is going to be the DJ for our Gala Disco Party next May.

Tony tells me he spends more time each week preparing the playlist for his show than he actually does broadcasting. May is a long way off yet but as nobody but nobody has ever held an event quite like this before we are planning NOW.

Graham is in charge of the play list but I will be insisting he includes lots of music from The Summer Of <Love. 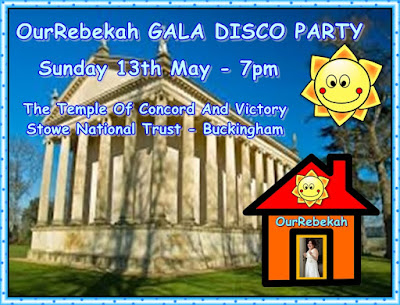 Tony has some super ideas about a live band playing. OH YES, it will happen. You just wait and see who he is thinking should come along. 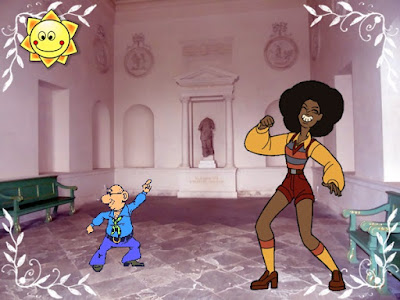 1967 may indeed be regarded as The Summer of Love but, my friends, it is NOTHING compared to the love we have experienced here within OurRebekah during the summer of 2017.

It is 6.09am and I am about to publish the blog for today. Who knows what today will hold. One thing I can guarantee is that THE WAVE OF LOVE will wash more beautiful and wonderful things ashore. 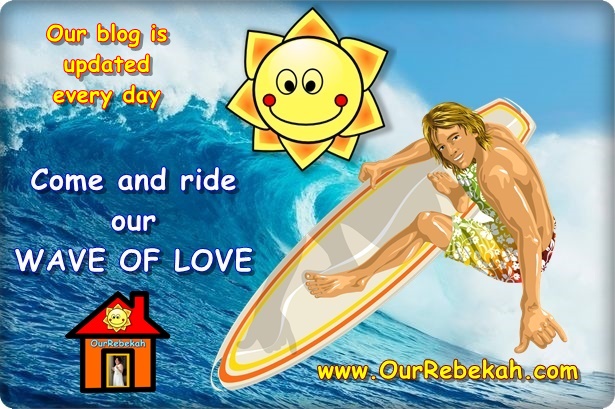 Wax down your surfboard and get on board.

Posted by The Sunshine Smile Crew at 22:12