Would you refuse to shake a hand of freindship ? 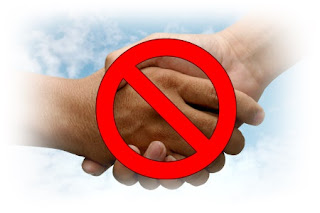 If a stranger reached out a hand in friendship would you refuse to take it and give it a warm shake ?

As I am trying hard to build up the visitor profile for the OurRebekah Website we have some friends reaching out their hands.

OurRebekah seeks to support Ronald McDonald Houses in the United Kingdom. Planning for all of the projects is coming along very nicely, they will be very successful IF, and it is a BIG IF, we can present them to enough people who decide they would like to take part. If we can not then the entire OurRebekah project will collapse and fail. Success depends on getting enough people to the website, people who will want to join in the projects, have fun and support Ronald McDonald House Charities.

Google Analytics tracks every page of the website, here are the results for July. You can see in the early days of the month the website was only being viewed by those working on the projects. Then when it was launched the graph starts to rise, peaking at thirty-five people in a day. To make the projects work we need an average of one hundred and fifty visitors a day, more would be better.

Google Analytics tracks not only numbers but also locations. When I first saw The Philippines appear on our list of visitors I thought it was a random blip, someone who had surfed in by error but the visitor kept coming back. I delved into Google Analytics a bit

deeper and found  the visitor is coming from - QUEZON CITY.  A Google search and I found Ronald McDonald House Charities is there !  The charity operates: Ronald Mcdonald House Charities Phil. Bahay Bulilit Day Care Center  Please do not tell me that someone way on the other side of the world is checking the OurRebekah website by accident.

Our website shows visitors in July from the USA in:
Why are these people coming to our website ?  The website has only just been launched and is 100% UK centred.  It can not be random surfing as these people keep coming back ! 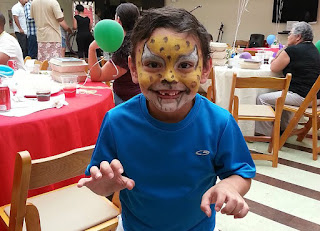 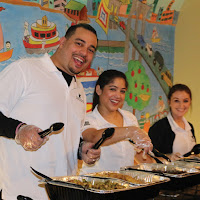 In every one of those locations tracked by Google Analytics there is either a Ronald McDonald House or someone who has a connection with the charity.

Why is this happening ?  Why are these people coming back to look at the OurRebekah website ?

We are a tiny operation that has so far only raised £812 pounds for Ronald McDonald House Charities. We may have lots of ideas pending, we may have lots of projects in the planning but nothing is really happening yet and little is going to happen until the middle/end of September.

Do we just ignore these people who are checking our website ?  I keep saying that until we have made between £5,000 and £10,000 for Ronald McDonald House Charities UK we have no credibility, either in the eyes of the charity itself or those we are asking to join in our activities.   To suddenly become OurRebekah International is ridiculous beyond any measure !

So when I check the Google Analytics stats each morning and see someone from Quezon City in the Philippines has visited the site AGAIN what do I do ?  Do I just ignore it or do I tell our friends and supporters ?

What about these American visitors ? 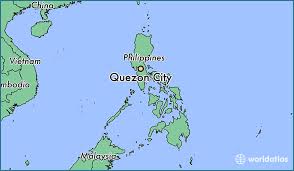 If somebody, a stranger, offers you a hand of friendship do you refuse to take it ?

I am thinking things through. NO I am not going to suggest fledgling OurRebekah becomes OurRebekah International. But we have to do something.

Next week I am meeting with Beth at Trailfinders to discuss our proposed and hoped for Golden Gate Bridge San Francisco and New York Central Park fun runs. I so much hope these will happen but everything turns on two things: 1. The price of a ticket and 2. getting enough people to join in. If both factors are not exactly right then the events will not happen.

When I was speaking to Beth on the phone she told me about her cousin who had spent a month in Ronald McDonald House New Zealand ! 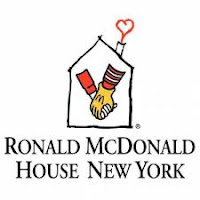 arrived one day. It was a teddy bear that had been sent by the family of one of my students. That was so special and so lovely.

If we were to take some gifts with us as we take part in the fun runs it would greatly enhance the projects and give something to the families in the houses.

We live in an age of instant communication. I can speak instantly with anyone anywhere in the world. When I post this diary it can be read immediately. Call me old fashioned but is 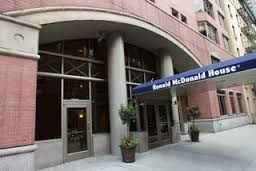 not something received in an envelope through the mail a bit more personal than an e-mail ?

Ronald McDonald House Charities in The Philippines was set up in 1995. The McDonald's

Philippines website has an abundance of busted links but I did find these two pictures and text:

RMHC currently has two flagship programs which focus on different but equally essential aspects of a child’s development: Ronald McDonald Read to Learn, a beginning reading program for grades 1 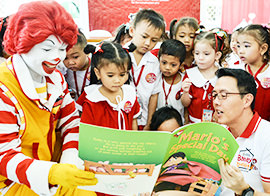 and 2 pupils, and Ronald McDonald Bahay Bulilit, which strives to build day care centers in areas where they are most needed.

Someone from there is checking our website every day ! We can't ignore that can we ? Could we some how send something from Britain to help with this reading programme ? Some books. Perhaps copies of Di Central Eating when that project comes on-line.

We are not planning a fun run in the Philippines but we have to some how take hold of that hand and give it a warm shake. What do you think ?
Posted by The Sunshine Smile Crew at 00:31