It is not racist to be patriotic 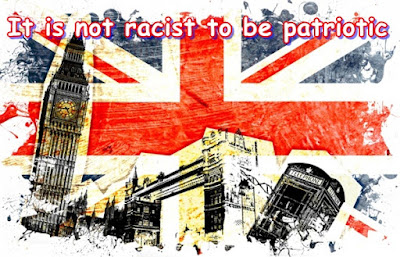 Scrolling back through some earlier diary entries I checked up on a earlier entry ahead of writing today's page,  One day in May I commented on a week I had spent in Devon and observed these factors:

No litter on the streets.

Heard only English spoken as I walked about.

Did not seen a single muslim rag bag on a woman's head.

NO potholes every few yards in the road.

Common sense is the order of the day.


I have only been in hospital twice in my life, once when I was born and I have little recollection of that time and once two years ago when I stupidly fell off a ladder and broke two ribs.  When I left hospital I wrote to its CEO and thanked him for the love and care I received there. In my letter I named two people. The first was a Serbian man, a nurse, who took care of me on my first night.  I was in much pain, I was frightened and embarrassed, I needed help when I wanted to go to the toilet.  I could not have wanted better care and understanding this man gave me.  The second was a nurse on the ward, all nurses were lovely and kind but this lady went the extra mile. She sat chatting to me, she told me about her family and asked about mine. She came from Poland.

It was not deliberate on my part but when it came to writing o the hospital I just had to praise these two IMMIGRANTS to Britain.  Our country is full up, immigration is a difficult issue but I say if there are more like these two who would like to live here and contribute to our society then BRING THEM IN.

In my diary on Wednesday 12th April I praised a young man who has served me when I visited his company. He was an immigrant but again making a great contribution to British society. If he has friends who are like him who would like to contribute to our country then I say PUT THE WELCOME MAT OUT.

Sometimes standing outside my local supermarket there is a man who calls out in a heavy foreign accent "Big Issue - Big Issue" as he begs for your money.  One day I saw him standing there.  His phone rang.  He pulled out an expensive smart phone and changed from speaking in English to some foreign tongue.  I have to assume he must have sold a lot of copies of the Big Issue to be able to afford such a phone.   Am I being racist if I say our country does not need the contribution he is making to society ?

In yesterday's diary I suggested I would like to make my home a FREE ZONE and ban certain things from crossing the gates at the end of the drive.  My wife suggested we could sell up and move to Devon where the things I do not like about our society, the things I have listed above, are not seen.  I would like that.  I am not certain I could cope with selling our home, buying somewhere new to live and all the upheaval of moving. Also if we did move would that be an act of APPEASEMENT ?

In my story THE BRIDGE HOUSE www.lilybedson.com I am now working on Chapter Three.  The story has reached 1938 where tensions in Europe are giving strong indications of a war on the horizon.  In my book I am not just trying to tell the story of my grandmother Lily's life but to let readers feel what it was like to have lived through those times.  As a child I listened to my grandmother talk about World War Two and wished I had been there as a part of it.  That was a childish view but now I think of all she said and feel how much better society today would have been if we had the spirit within which people lived in wartime Britain. Not the fighting, not the death but the spirit of oneness and national pride.  The spirit of defiance towards those who would seek to destroy Britain.

As a teenager it was not a case of IF there is a third world war but WHEN.  With the fall of the Berlin Wall we think that threat has gone away but has it ? Wait and hear the liberals start screaming racist at what I am now about to say.

Our security services say there are 23,000 jihadists living in Britain today.  Is it racist to say that they should be rounded up and interned ?  Is it racist to say that their families should also be rounded up and interned ?  Islam has declared war on the world not the other way round. In the run up to World War Two, in the chapter I am currently writing in The Bridge House, could you imagine the government of 1938 allowing 23,000 Nazi terrorists to roam about free ? Could you imagine the government of 1938 allowing people to walk the streets displaying a swastika as a symbol associating the wearer with Nazi terrorists ?  So why do we allow islamists to put two fingers up to our British way of life, our security and our culture by wearing rag bags on their heads ?  Yes, rag bags - I will not credit the item of clothing by using its moslem given name.  Is it racist to despise islamic terrorism and those who associated with it ?

I have no problem with a Seik walking the streets in a turban. I have no problem with a Buddist and a shaven head.  I have no issue with a Jew wearing a scull cap. I have no issue with an Indian wearing a sari. They are not threatening our society, they do not want to overturn our way of life.  At the end of World War Two Britain imported many West Indians to build up our work force. These people have contributed so much to our society and are every bit as British as I am. So please do not tell me I am a racist.  If I had to live in any other country than Britain it would be Barbados where its population, society and culture has so much that the liberals and the loony left have tried to eradicate in 21st century Britain. And oh yes it is a black population.  Who cares about colour ?  I don't so please do not call me a racist for wanting a better society.

I spoke of my teenager years when we all lived in the certainty of World War Three.  As chapter three opens in The Bridge House there is a hint of war, over four thousand words I have taken my reader to the point where war is a certainty.  Many people in the 1930's were slow to wake up to what was happening around them. How many people today are still sleeping and refusing to wake up to the reality of that which is happening around us ?
Posted by The Sunshine Smile Crew at 21:39