More text added to Chapter Two in my latest Story

I have written ore text in Chapter Two of my latest story.

The Patriotic Pensioner - Diarist and Author 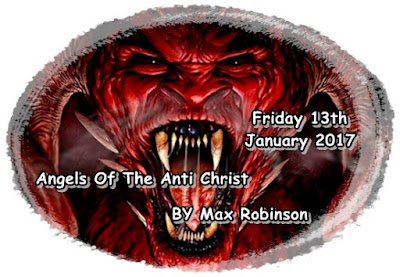 Horror pulsed through Detective Chief Inspector Graham Warner's entire body. A serial killer ?  How had nobody noticed a connection and linked the two previous murders. McDermott had filled him in on the bare essentials, it was incredible that the first two had not been solved so making way for the killer to strike again.

Three murders, all with traffic wardens as victims. Three murders on Friday the thirteenth. The media would go wild with such a story.

"Recall everyone to the incident room. Call Sergeant Abbott and DC Miller, CD Coldrich and myself are o our way. Bring in Sergeant Cort as well."

This was going to need a bigger squad than the five members of Thames Valley's Major Incident Team, Sergeant Cort knew the Sawicki case so having him around would be good. Good but by no means enough for the work that now lay ahead. From the information McDermott had given him over the phone Warner understood there was a victim in London, that was the Met. They probably would not want to hand over the case to Thames Valley without an argument. Luton, that was Bedfordshire and the smallest force in the country. Warner was sure they would not object to his taking on their case.

As DC Coldrich drove the two of them back to the station and the incident room Warner called Thames Valley's headquarters in Oxford and asked to speak to the senior officer on duty. He asked that the two cases be given to his team.

"They are after all cold cases," he said to the Deputy Assistant Chief Constable.

"I agree with you Warner," he said in reply, "and I will do my best. You carry on and leave it to me. Bedfordshire I do not see as any problem but navigating the political minefield of the Met, and at the week-end, could be tricky. Oh, one other thing. Keep a lid on all of this, we do not want the press wetting their pants until we are ready."

San Francisco is January is cold but still a beautiful city. There was much Timothy Ford wanted to do there but much would wait until the warmer weather came along. That day he drove his hire car over the Golden Gate Bridge and on to the Redwood Highway.  England was half a world behind him and there it could stay until October, until Friday 13th October.

Dave McDermott had joined the police by chance, it was not his first choice of a career but it was well paid and promotion did not look difficult to achieve once the initial hurdle of sergeant had been surmounted. He had passed his sergeant's exam, putting the pieces together to reveal the dark works of a serial killer should not be that difficult and would definitely help him achieve the rank of sergeant. As a part of this new team which apprehended a serial killer in its first case would do his career no harm, no harm at all.

Electricity filled the room when the team assembled. the information was think, McDermott had printed off that which he could from the computer. When he had finished he would hand copies to all team members but until then he would stand up in front of everyone to present what he knew.

"Victim Number One. Female found dead in her car in Luton on the morning of Saturday 14th May 2016, killed sometime the previous day. Head bashed in with a rock of some kind. Blouse ripped open, bra removed and the numbers Six-six-six written using a permanent black marker on each breast."

"Six-six-six," Warner said. "And the number of the beast shall be six-six-six."

"It's all to do with Armageddon, the end of the world and the anti christ. It's a biblical prophesy. "

"So does our murderer think he is the anti christ ?"

"He won't be the first insane person to think that."  Warner said. "We need to catch him before he strikes again."

"When's the next Friday thirteenth."

"I checked that out,"  McDermott said. "October."

"We'd better have him caught and behind bars well before then," Warner frowned.

"Victim Number Two.  Male found dead in a park. Cause of death again a rock bashing his head in. Then a sharpened stake of wood hammered into his chest. In neither case was the murder weapon, the rock found. No witnesses. No DNA or forensic evidence."

"Now here's the plan," Warner said. "We split into three teams. Terry, you and DC Coldrich take the London case/ Dave, you and I will investigate Luton. I will arrange for you to be made up to Acting Detective Sergeant."

"Sergeant Cort, I want you to be part of the team as well as our liaison officer. You will work with DC Miller on the Sawicki case."

"You're the local man, that is what will count if we are to get a breakthrough here. Each team gather everything you can today and tomorrow, organise you off duty time as and when you wish then first thing on Monday we will share what each team has found and try to build a picture.  I will do my best to secure a profiler for Monday to look at the evidence."

Sergeant David, Dave, McDermott - Acting Sergeant David McDermott, hopefully the acting bit would soon be dropped, was the team member who had linked the other two murders  with the Sawicki case to establish there was a serial killer on the lose. Warner had not said that much but obviously was pleased with him, his gratitude shown by the promotion even if it was acting.

The victim in the Luton case had six-six-six written on each breast. There was a significance in that but what was it ?  McDermott was not a man of religion but by the Monday team meeting he would know everything there was to know about six-six-six.

Sawicki had been found with his trousers and underpants pulled down to his knees, his shirt lifted to reveal his belly then disembowelled. Hanging, drawing and quartering, that was how traitors were dealt with right up to the early Victorian age but didn't drawing involve the cutting off of the penis and scrotum ?  Why had the murderer not done that ?  Had he been disturbed ? At two o'clock in the morning in a deserted nature reserve where nobody goes even in daylight, not likely ?

The London case. Again the victim was knocked senseless with a rock and again the rock had never been found. A round wooden stake had then been hammered into his heart. That was what they did to witches wasn't it ? No, witches were burned, a stake through the heart was how to kill a vampire.

Disembowelling a traitor, six-six-six and the anti christ, stake through the heart - there was a common thread. Evil was the word that came to Dave's mind.
Posted by The Sunshine Smile Crew at 08:14