I have started work on a new story.


This story is a bit different. When I write I write for myself, I do not have a target audience. I have always believed that the primary enjoyment in writing comes from composing the story, developing a plot and bringing in characters to make it all happen. It matters not if anyone ever reads the story or not. If they do and if they enjoy what has been written then that is a bonus.

This story does have a target audience, my grandson. He will be seven years old in May 2017 but with a reading age about two years in advance of that. In writing, therefore, I am trying to use words and style that he will be able to read on his own and without any help. 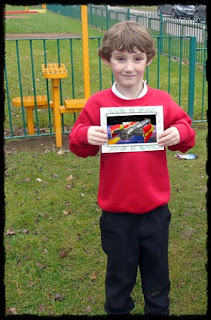 First thing one Friday morning I popped up to my local supermarket. Turning on the CD player the theme tune from this song blasted out into the car. Walking round the supermarket an idea for a story filled my mind. As soon as the shopping was in the boot and I was back in the driver's seat I played it again. The moment I got home I typed up the introduction.Then I turned to Destiny and asked if I was meant to write this tale or not. I was told to see if I could purchase the website domain name FireballXL5.com. If I could then write I had to do. NO that was not available BUT  FireballXLfive.com was. I waved my Visa card at the laptop so now own the domain and am committed to writing the tale. A tale inspired by the music.

I have written the initial introduction which I am going to give to Adam so he can read it.  If he thinks it is a load of rubbish that will be the end of it and I will have wasted the money buying a domain name for it. But, and fingers crossed, if he does like it I will finish the story. THEN I will ask Adam to draw pictures for it and to become the story's illustrator.

Adam has a wit which is as sharp as a razor so in writing I am trying to play to these. In his picture he may look as if butter would not melt in his mouth but, trust me, he is not like that at all.

When I was just a little bit older than Adam there was on childrens' TV a programme called Fireball XL5. I took the theme tune from this and added it to one of the collections on my YouTube channel.

This is what I have so far written:

Honestly he is. He is always coming up with stories. Adam has always known that some of them are true but others must simply  come out of his head !

"When I was ten years old Juri Gagarin became the first man in space."

Adam knew that but when Granddad said his Nan and Granddad had taken him to a Russian exhibition in London where he saw some of the people who designed Gagarin's spaceship Vostok One Adam did not believe him.

"When I was eighteen I watched the first moon landing live on television,"  Granddad said.

Eighteen ? What would it be like to be eighteen ?  Adam was seven.  When Granddad was seven they did  not have computers.  Tablets and smart phones had not been invented. Television programmes were all in black and white with very little for children to watch. It must have been very boring to be a boy in Granddad's time.

One of the stories Granddad was always telling was about a television programme which he used to watch, it was called Fireball XL Five.  Granddad downloaded the theme tune from YouTube and would play it to Adam constantly in the car when he took him to school.

Fireball XL Five was a spaceship commanded by Colonel Steve Zodiac. All of the characters were puppets. Granddad said his favourite was Robert the robot. The way he described this robot made Adam think it was a bit girlie !
When Granddad asked Adam if he would like to go away on holiday when school broke up for the summer it sounded exciting.

Adam knew that when his Dad was a boy Granddad had taken him with his sister and brother to Legoland in Denmark, they had also been to Egypt to visit the pyramids but most exciting of all they had been to California to Disneyland and Universal Studios. Was that where Granddad planned to take him ? Where was somewhere special ?

"No he's too young. he can come when he is older."

Oh no !  This was one of Granddad's crazy stories.

"We are going to Titan. That's one of the moons orbiting Saturn."

"Yeh, yeh ! I suppose we are going in Fireball XL Five."

The Patriotic Pensioner
Posted by The Sunshine Smile Crew at 20:48