Where do I stand on immigration ? 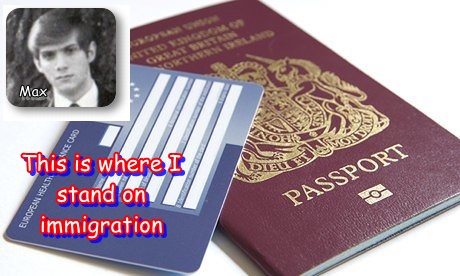 An extract from my current diary page
www.patrioticpensioner.com

When I was born the UK population was fifty million. Today it is sixty four million. It is not difficult to argue that our island is full up. 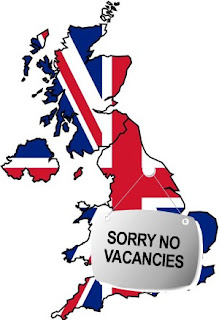 At the top of this diary entry (www.patrioticpensioner.com) I celebrated Mo Farah winning a knighthood, I am so happy for him.

Farah was born on 23 March 1983 in Mogadishu, Somalia. His full name is Mohamed Muktar Jama Farah. He spent the early years of his childhood in Djibouti with his twin brother. He moved to Britain at the age of eight to join his father, speaking barely a word of English.

Now look at him. He does not use his islamic name but simply calls himself Mo.  He speaks perfect English and is proud of his adopted nation.

For my money, how ever tightly packed we are in an overcrowded Britain, we should welcome any more Mo Fara's who come our way. 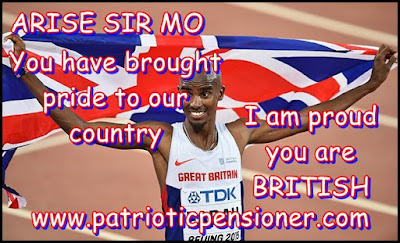 Just over a year ago I was in hospital following a minor accident.  It was the first time I had been in hospital since I was born. Before I left I asked for the Matron to come and see me.  I thanked her for the lovely way I had been cared for.  It it is possible for hospitalisation to be a good experience mine was.  When I returned home one of the first things I did was to sit down and write a letter to the hospital's CEO praising the was I had been looked after. In my letter I named two people whose care had been extra special.

One was a Serbian male nurse. I needed to go to the toilet, I was desperate. I did not want to use a bedpan.  I asked Marco, that was his name, if he could help me walk to and then use the toilet.  He was so kind, so understanding, so respectful and supportive of my dignity.
If there are any more like Marco in Serbia who would like to come and work in our NHS system BRING THEM IN.

The second person in my letter to the hospital CEO was a nurse, a lady from Poland. She went out of her way to be friendly to me, we chatted about my family and she told me all about hers.  I found that her daughter and my grandson had gone to the same pre-school crèche.  I asked her about her husband's job and how they managed a family with both working shifts. She was a qualified nurse but had a thirst for more medical knowledge.

One thing angers me more than anything else when I shop in my local supermarket, that is seeing Polski bread next to the traditional British granary cob etc.  I wonder if there are any people left in Poland. It is estimated there are 831, 000 polish people living in the UK today. They make up the biggest migrant community in our over-full island.

If there are more nurses like this lovely lady then I say let them come and work here, let them bring their families.

What we don't want, IMAO, are the ethnic car washes that appear all over the place. I would rather let the dirt on my car grow thick enough to plant potatoes than spend any money there. What I don't want is the big issue seller who begs outside my local supermarket yet has money to fund a smart phone.

Some we need to kick out, we should never have let them in, in the first place.  Others we should be damn grateful we have them with us. But our island is full !  True enough. So let's kick out a few Brits we do not need. Let's start with some UNWORTHIES without whom this would be abetter place.

For my full diary go to www.patrioticpensioner.com

Posted by The Sunshine Smile Crew at 22:24