Things Were Different In My Day

I have started writing my next story, an autobiography of my school years. This is my first draft of my first chapter.  I will write more tomorrow. 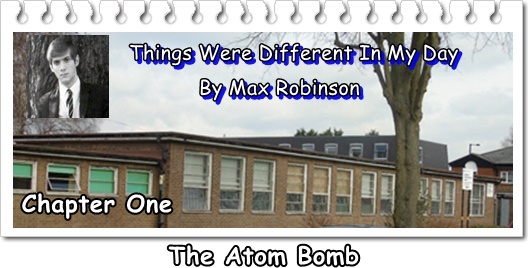 The first three words said to me at my new secondary school. Words spoken by Mr Wallbank, Stan Wallbankm  woodwork teacher - self-appointed deputy-deputy head and an all-round and mean and nasty man.

I burbled something about the 'bus being late to which he said, "Well hurry up and get in here !"

That was September 1962, I was eleven years old.  I'll tell you more about that day, Stan Wallbank and all that followed but first let me take you back to another September. This one in 1956 when I was only five years old.

Although it happened just over ten years before I was born, the explosion of two nuclear bombs on Japan was fresh in the memory who had been around at the time. Even as an infant I knew what an atomic bomb was, I knew Russia and America were likely to drop them on one another within the not too far distant future. My friends and I were not concerned about Russia and America we had our own Atom Bomb to worry about, one far more dangerous !


Mrs Attwood, our first year infant school class teacher, was The Atom Bomb.  One hundred and sixty-seven years old, about five foot nothing in height, grey hair tied back in a bun she was a dragon and an atomic bomb. She had been in teaching since Adam was a lad and still she had no mastered the skills needed to educate those in her charge.  In her defence many teachers back in 1956 did not have these skills.  Education was monochrome and not just the white chalk on the blackboard. Teaching meant handing out facts and information, terrorising children into remembering them and leaving it there.  Explanation and encouragement were words not in the average teacher's vocabulary and understanding. Certainly not in the Atom Bomb's.

One morning she drew a question mark on the blackboard then rubbed it off before starting to tell us what ever it was she wished to impart.  I had never seen a question mark before, it was not part of the alphabet as I knew it.  I put my hand up to ask whet this strange thing was that she had put on the blackboard. When she ignored me I spoke and asked. The Atom Bomb exploded !  She walked to stand in front of me then gave me the biggest slap across my face she could muster.  I did not cry but I learned that a child in Mrs Attwood's class was not expected, was not allowed to ask for any explanation or clarification.

I wonder if parents realised what the standard of teaching was.  Most children from middle-class families could read before they started school.  I came from a middle-class home and I could read.  In 1956 there was little interaction between parents and school, they shared the child but did not share anything about that child's welfare or educational achievement.  There were no parents evenings, there never was one at any time throughout my entire school life.  In my infant and junior school there were no reports to be taken home. These did appear when I attended secondary school but they were only a single sheet of paper where teachers could write a single sentence for each subject. The Atom Bomb did not teach me to read, I could read simple words and sentences before I joined her class.

In 1956 there was no such thing as induction to school, no taster sessions, no gentle start.  One day you were at home, a carefree child, the next you were a school pupil. Parents dropped their children at the school gate, they were forbidden to cross the threshold. By the time I was six I was walking to and from school myself, no child had his or her parents take them to school after this age.  Children were forbidden to take books hoe from school, not that in Mrs Attwood's class there were many books.  We wrote with chalk on mini blackboards.  I'll tell you more about them in a moment.  The only book a child had was a reading book. If a parent wanted their child to read to them at home they had to go and buy a copy of the book.  There was in Birmingham, which was not far from the town where we lived, a shop by the name of The Midland Education Centre.  If parents wants to hear their children read and even help them they had to buy the books from there.

My first reading book was buff brown in colour and called NIP AND FLUFF.  Each page contained line drawings of a dog - NIP and a cat - FLUFF. Small sentences then told of the activities of this canine and feline duo.

Here is Fluff.  Fluff is a cat.

It did not take me long to finish the Nip and Fluff book.  My father then had to visit The Midland Education Centre to buy a home copy of my next reading book. DICK AND DORA. Same format, same words but this time with the boy Dick and his sister Dora. Throughout my now long life I have never known a girl or woman whose unfortunate name was Dora. We never knew what the Atom Bomb's first name was, I wonder if it was Dora.

It was considered important children knew their alphabet.  Yes I agree with that and the Atom Bomb's way to teach it was clever, probably the cleverest thing she ever did in her entire career.  I am not sure how many children there were in our class, I remember there were forty-two in my secondary school form, but in the Atom Bomb's class there must have been more than the 26 letters in the alphabet. Only twenty-six of us were involved in this project, I have no idea what happened to the rest of us. We were each handed a white apron which hung over our necks and fastened with ties behind our backs. On each was stenciled a letter of the alphabet.  I was letter E.

We all stood at the front of the school hall wearing our aprons then one by one stepped forward and spoke a line.

I can't remember what D did.

I never heard the word Mathematics or Maths until I started secondary school. In my early years we did not do Maths, we did sums.  There were adding up sums and there were taking away sums.  Later we would do sharing sums and timesing sums.  In Mrs Attwood's class we did not write on paper, far too expensive to waste such a resource on children.  Food rationing in post war Britain ended in July 1954, the mindset of waste not want not was firmly fixed in minds like The Atom Bomb's so in her class NO PAPER was the rule.  We did our sums on pieces of wood measuring about eighteen inches by twelve inches.  These had been painted with a black matt paint.  We wrote our sums on these, we copied them down in chalk from the big blackboard at the front of the class then wrote in our answers. When we finished we would line up to present our work to The Atom Bomb for her to mark, a tick for correct and a cross for wrong ! I knew I had all of my sums right so lined up I the slight hope that Mrs Attwood would smile or even say well done.  I held my chalkboard close to my chest, I did not want anyone to see the answers and copy them.  I held it so close to my jumper that when I reached the front of the line I presented The Atom Bomb with a blank board, my jumper had rubbed out all of my sums and my answers.

Education was, as I have said, black and white.  Literally and metaphorically.  A good teacher was someone who could keep discipline in the classroom, any learning that took place was secondary.  In post-war Britain, even ten years and more since VE Day, times were tough.  Teachers were not well paid and education a low priority.  There were not enough teachers for the number of children in the country so the government set up what it called an Emergency Training Programme.  Instead of taking three years to train a teacher everything was crammed into twelve months. A bit like it is today in the twenty-first century where we no longer train teachers but take anyone with a degree and pop on top a tiny, tiny bit of classroom training. The Atom Bomb, of course, was not emergency trained, she had been standing at the front of a classroom since the First World War, probably the Boer War or even the Crimean War.  Teachers were not obliged to retire when they reached a certain age, they were encouraged to stop on until they dropped.

The Atom Bomb had within her class two children who were mentally handicapped. One was the son of the local doctor and one the daughter of the local vicar. Even for the most skilled teacher trying to do anything with these two in a normal class of children would have been hard, for The Atom Bomb it must have been impossible.  These two were left to do their own thing, to amuse themselves and not bother their classmates. There came the day when the boy, David was his name, did his thing in the drinking fountain in the boys toilet.  Putting a drinking fountain in the toilets was not the best architectural design and I guess David just confused it with a urinal.  The poor child was given the most severe telling off and two prefects from the school's senior year were placed on sentry duty to make sure nobody drank from it.

As teachers were emergency trained so our school was emergency built. Land was not in short supply so the school stood on an extensive site.  The buildings were prefabricated and thrown together as quickly as possible. The walls were metallic on the outside with some form of fibreboard on the inside. Within this fragile construction were thick, heavy doors which when shut shook the classroom and those on either side. The three infant classrooms were on one side of the building with a corridor leading away to the centre of the school where there was the hall, dining room, headmistresses office, secretary's office and medical room.  The corridor then moved on to the four classrooms of the junior pupils.

I will write more tomorrow and add it ti my story library: www.maxwellrobinson.online
Posted by The Sunshine Smile Crew at 09:19